I have found quite a bit of information about taking folding bikes on trains and the Tube in London. Specifically it says you can take a folding bike pretty much anywhere.

However, having examined the small print of various train companies in the UK there is usually a distinction drawn between Bromptons and the rest, i.e. Bromptons, which obviously fold up really small, are considered "true" folding bikes while the other types of folders appear to inhabit some regulatory grey area, halfway between a folder and a non-folder.

I'm contemplating buying a Montague Crosstown. As you can see there, this has full-size wheels. Even if I wrap this in a bag I would anticipate getting some nasty looks if I take that on a busy-ish Tube / train in London, but I can cope with nasty looks. Does anyone know what the actual regulations are? 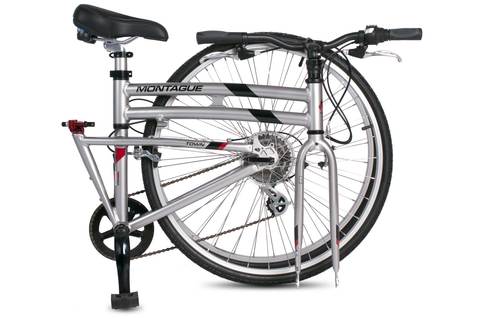 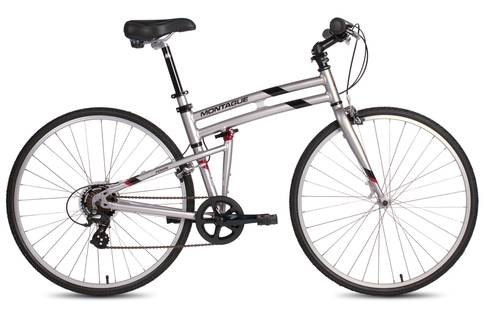 The authorative source would be Transport for London's website at https://tfl.gov.uk/modes/cycling/cycling-in-london/bikes-on-public-transport which states:

Non folding bikes have time restrictions or are fully excluded.

Here's a bike-centric map for NON-folding bikes provided by TfL, dated May 2018. http://content.tfl.gov.uk/bicycles-on-public-transport.pdf

As for your question of what defines a folding bike?, that would be the mechanism of folding. A bike whose main frame has any form of hinge would class as a folding bike.

You'd want to go out of your way to fold it as small as possible. Remember a train is not a public place, and the "terms of conveyance" will permit them to exclude you. So I'd suggest always turning the handlebars and lowering the saddle to make it look smaller. I'd suggest not fitting bulky accessories too, a rack might be convenient but adds to the bulk.

You should absolutely consider a cover or water cape for the bike, to keep its dampness or oils from upsetting anyone. Purchase of some folding pedals, or easily-removable ones like the MKS commuter pedals would be worth considering too.

Another interesting observation - the image above shows the FRONT wheel is removed from the fork and laid beside the rear wheel. I'd bet this bike is not a lot larger than a 20" folder when properly buttoned up.

How you stand/sit with the bike may need some consideration. If you stand and have a backpack, then front-carry the bag on your chest with the bike on the floor below your bag. This would save floor space.

Some UK rail companies, such as GWR (who operate some local trains in West London as well as mainline services) only consider bikes to be folding if the wheels are up to 20".

Folding bikes with a maximum 20-inch wheel can be carried as luggage without any restriction. Please make sure you fold it before boarding.

That would exclude the bike you've pictured, unless you can pack it in a bag and call it luggage (checking the size of that too)

Being a Londoner I would say this.

If you want to guarantee being able to take a folding bike on the tube go for a Brompton or something that folds to the same size. Decathlon do very similar folding bikes.

You could probably get Montagne Crosstown on 80-90% of your journeys but there will inevitably be a day when a high on power tfl staff member stops you from getting on the train.

I hope this helps.

Not the answer you're looking for? Browse other questions tagged innertube training folding-bicycle london or ask your own question.

3
What are the rules about take a bike on the London Tube?
2
What is different about cycling in London?
5
Are folding bikes less efficient than full sized bikes?
2
Wheel builder London?
10
How do people store bicycles in London?
0
Does more gear inches on a folding bikes work better?
7
Why do folding bikes usually have MTB components?