Is there any benefit to riders on the front of a paceline? [duplicate]

You can save a lot on air resistance by drafting a rider closely, i.e. riding close to their rear wheel.

What about the rider in front? Is there a benefit, a loss, or is there no difference?

Edit - is there any way or position ensuring front cannot feel any energy loss while you enjoy resting behind or speedup ?

Yes, it's small but real. Aerodynamic drag in cycling pelotons: New insights by CFD simulation and wind tunnel testing Journal of Wind Engineering and Industrial Aerodynamics Volume 179, August 2018 is an interesting paper on the subject, with both theory and experiment. The introduction is a nice summary of previous work, including simpler cases, but many of those papers are inacessible without a university login, unlike the one I've linked.

Figure 9 and Section 3.8 are most of interest, especially Fig. 9b which indicates that a reduction in drag of 4% on the lead rider is possible. Figure 22a shows a simulation leading to an even greater reduction in drag for the front rider.

You can see from the figures in the paper that behind a single rider there's a low-pressure region. You can regard this as sucking the rider backwards. By partially filling this low pressure region with another rider, its effect is reduced.

I see you're thinking of aerodynamics, but there are other advantages too.

Race-craft, or more specifically Control. If you have a team in the bunch, you can work together to control the whole group. You're in the optimal position to get on the wheel of any break-away attempt and haul it back in. Likewise, you can be in position to "block" any attempt to follow a breakaway rider, if that fits your overall tactics for this race

Even individual riders can control a bunch or paceline from the front, by edging up the average speed and attempt to stress or tire-out other riders.

View as front rider you have a lot more awareness of what's coming up. There's no other bike/rider in front of you to block your view of the road, so you can prepare for changes. It would be very nasty tactics to just skim the edge of a pothole or gravel patch and hope following riders plough into it potentially wiping out competition. Related - if you're further back there's more chance of getting caught in or behind an accident, which adds delay and allows breakaways a chance to gain ground.

Motivation is increased - I know my segment times are improved when I'm being chased/followed by other riders, or by vehicles.

Advertising minor but by being visible, any sponsor logos are also more visible. Any team gets a credibility boost when they control the race from the front.

The short answer is, yes, having rider(s) immediately behind you provides an aerodynamic advantage. It reduces the power demand at same speed by a few percent, all else being equal.

I've performed the experiment to test the impact on aerodynamics on the a rider with another immediately following them. I wrote about it here in a blog item from August 2015: https://wattmatters.blog/home/2015/08/when-your-ride-buddy-becomes-real-drag.html

Here is the text from that item replicated:

But what about when your buddy is drafting behind you or rides beside you? Does this impact the power needed to maintain the same speed?

The short answer is: yes, both of them do.

But in what way and by how much?

The question as to whether a rider in front gains benefit from having a rider behind them has been researched before, and the consensus is that yes, they gain a small benefit. There is good reason for this slightly counter intuitive result and it's to do with the "bow wave" of air from the rider behind causing a change in the turbulent air flow behind the lead rider and reducing, by a small amount, the depth of the low pressure zone that exists behind the front rider.

This slight reduction in the fore to aft air pressure differential of the lead rider provides a small but measurable gain. This can be expressed as a reduction in apparent CdA, but since a rider's CdA doesn't really change if their position and equipment hasn't, then in reality it's a change in the forces acting on the rider, and as a result, the power demand at the same speed is slightly reduced when compared with having no rider in close proximity (or alternatively, a rider can travel slightly faster for the same power when they have a rider immediately behind them).

In 2010 Andy Coggan examined data from a 2007 track session ridden by his wife, in which she did efforts on the track both with and without having a rider drafting behind her. In Andy's assessment of the data he remarked

The reduction in energy demand will be of a very similar amount to the reduction in apparent CdA. Assuming ~350W, a reduction from a CdA of 0.198 to 0.192 is equivalent to a reduction in power demand at the same speed of ~10W, or 2.8%. In this case the other rider was riding in pursuit set up, and were themselves very "aero" (an elite track pursuit rider).

So that's one example.

This phenomenon has also been reported in the published scientific literature, examples include:

where amongst their data they report that the lead rider requires 2-3% less power while riding on the front of a 4-man team than if riding solo at the same speed.

Another more recent study examined this using both computational fluid dynamics (CFD) simulations along with wind tunnel validation as described in this paper:

In this paper they report the lead rider of two riders riding in single file receives a reduction in energy demand of 2.6% while riding in the time trial position.

Above are three examples of data from a similar situation, with reported reductions in energy (power) demand to ride at the same speed ranging between 2% to 3% for the lead rider compared with riding solo.

There's another paper that reports a 5% advantage for the lead rider of team time trial, although I'm not able to see more than the abstract:

Aerodynamics of a cycling team in a time trial: does the cyclist at the front benefit?; European Journal of Physics, Volume 30 Number 6, 2009; A Íñiguez-de-la Torre and J Íñiguez

Edit: I've now read the paper and it used two dimensional CFD analysis on ellipses as a simple model simulation of multiple riders in a line and is indicative of the principles involved.

I've had the resources to test this for some time but I've hadn't got around to doing the experiment, mainly because exclusive use of track time costs money and I'm focussed on working with clients on answering more important aerodynamics questions for them than doing experiments just for the fun of it.

But today I had the opportunity to do just such an experiment.

I was doing aerodynamics testing as part of a story being written about a woman masters rider preparing for the UCI World Masters track cycling championships being held in Manchester later this year. Cycling NSW kindly offered and arranged for the track time to make this possible, and a client of mine, Rod Wagner, loaned a special power meter to enable the testing on the rider's track bike, while I offered my time for the aero work.

We'd reached the end of our allotted track time, but as luck would have it no one else was ready to ride on the track, so we had some spare time for the experiment, and willing participants.

I won't comment on the primary aero testing session as that's for another to write about for later publication in magazine and online, but I'll expand on the impromptu experiment.

The method of measurement

With the Alphamantis Track Aero System, I record and monitor in real time a rider's aerodynamics as they circulate around the indoor velodrome. Testing is done indoors as this removes the wind variable and provides for a well controlled environment. The system enables us to monitor speed and velocity and along with other key inputs such as air density, track geometry data, centre of mass height, rider mass and rolling resistance variables, the Coefficient of drag x Frontal area (CdA) is also plotted in real time and lap by lap a picture of a rider's aerodynamics is revealed.

I've briefly explained this system before in this post, which also has a video demo. You can also read more on the Alphamantis site linked above.

Normally this testing is done with a rider riding solo on the track but for this experiment I asked her coach, another world level master's rider, to join in. His task was to ride in various positions relative to the test rider (who would continuously circulate around the track at approximately 40km/h) while her coach would change his relative position on the track every 4-6 laps as follows and on my instruction, he would:

This test process was repeated a second time during the long test run to validate the results from the first run.

The system is really reporting the impact on apparent CdA. It's a quick way to measure how beneficial or detrimental having the other rider near you is, and the measurements are not overly sensitive to the changes in speed during the run (this is the nice thing about the process).

Here's a table summarising the results of all the data runs. Click on images to see larger versions.

Also shown are the results of the traditional drafting, being a reduction in apparent CdA to nearly half of the solo value, and interestingly, the apparent CdA increase of ~ 0.013m^2, or nearly 6% when the other rider was riding alongside the test rider.

Since apparent CdA differences are a little harder to understand, I've flipped the data around to show, at a normalised velocity of 40km/h, what the power demand for the solo rider would be for each scenario: 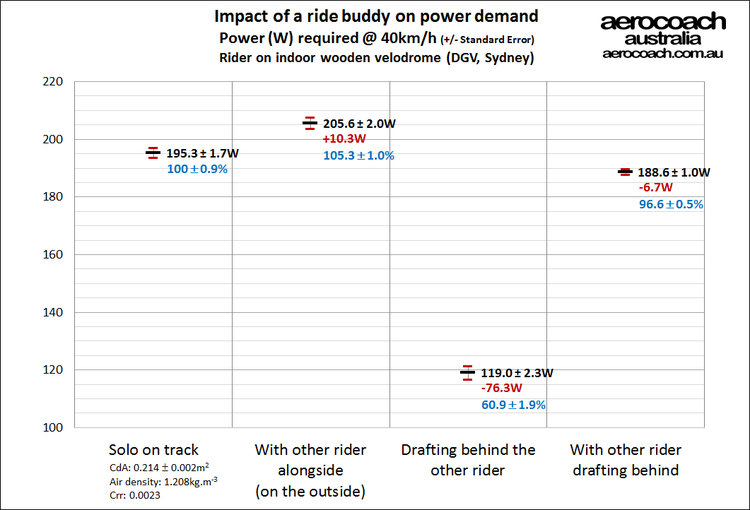 The table below summarises the chart data, and also shows the difference in power compared with riding solo:

So in this experiment, I found a 3% energy demand benefit from having a trailing rider, and that's right in line with (but at the top of) the range found by the other reported data referenced earlier.

This result of a 10W penalty when riding alongside another rider is more novel, although it doesn't surprise me it may be news to some.

It is something to ponder when riding in team formation events, especially when the lead rider pulls aside to make their way to the back of the line of riders. They and their team are better off (at least in low yaw conditions) if the rider pulls over and moves well away from their companions until they are near the back and can return to be in the draft of the other riders. 10W is nothing to sneeze at.

So it would seem that if you wish to ride alongside your ride buddy, it might cost you ~10W give or take. If speed is of the essence, then ride in single file, you'll both go quicker that way.

28
Does drafting cause resistance to the lead rider?

28
Does drafting cause resistance to the lead rider?
5
Does group riding negate the aero benefit of deep rim wheels?
1
Aerodynamics of cycling behind a bus