How close do peloton riders typically and strategically follow each other's wheel/attack? Also, how is this distance manipulated in order to allow for strategic movements or a more aerodynamic ride.

How close do peloton riders typically and strategically follow each other's wheel/attack?

At the higher levels of racing you are often try to tuck your wheel as close as you you can stand, usually within about 2 inches of the rider in front, depending on how much you trust the rider in front. If you know they are sketchy you will allow more room to compensate for their instability.

Also, how is this distance manipulated in order to allow for strategic movements or a more aerodynamic ride.

Strategic movements are often trying to break the draft, see How to prevent drafting?

Getting more aerodynamic means either getting tighter to the rider in front or ensuring you have a number of riders in front and to the sides of you to maximize your draft. A recent study showed that the draft in the belly of the peloton can be enormous, below is an excerpt from their results section discussing of their wind tunnel testing of quarter scale models with force transducers. They estimated cyclists in the belly of the peloton experience a 90% reduction in drag (i.e., 10% of the drag as a solo cyclist)

Fig. 13 shows the measurement results for the nine cyclists in terms of percentage drag of that of an isolated rider at the same speed, i.e. the quarter-scale wind tunnel model tested at 26.7 m/s. It is shown that all nine cyclists benefit from riding in the peloton, even the leading rider (R1), who experiences a drag reduction down to 84% that of the isolated rider. This is caused by the subsonic upstream disturbance by the 120 cyclists drafting in his/her wake. When moving downstream in the peloton, the drag rapidly decreases. Rider R3 only has 35% of the drag of the isolated rider. This value corresponds quite well to that of the trailing rider in Fig. 9b considering that (i) rider R3 has an additional benefit by the 116 riders drafting behind him/her and (ii) the diamond configuration has a larger spacing between the rows than Peloton A. The last four riders, R11 to R17, have a drag force that is below 10% that of the isolated rider. 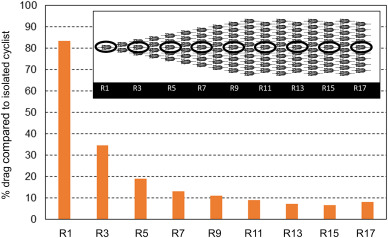 Figure. 13. Results from wind tunnel measurements: drag of the nine cyclists in the vertical centerplane as a percentage of the drag of an isolated cyclist riding at the same speed.

While you can get a massive draft in the belly of the peloton, the drawback is that you will not be able to respond quickly to attacks due to there being layers of several riders between you and the open road. As such, a breakaway group could easily form while you are stuck back in the peloton. If the break turns out to be the decisive race maneuver, then it didn't matter how much energy you were saving as you missed the critical opportunity.

Strong riders therefore will often sacrifice a bit of energy savings to ride near the front of the peloton so that they can control the race and respond to attacks. While minimizing energy expenditure can be important, it is one of may factors that need to be optimize simultaneously. A racer just need enough reserves to cross the finish line, anything extra was wasted!

The length of the drafting benefit increases with the speed of the cyclist and the size of the cyclist in front. Even at 5 meters there is significant benefit for the rider behind. However what increases significantly as the distance goes from 1meter to 10cm is the benefit to the leading rider by having a rider behind him. So the closer you ride, the faster the lead rider can go at the same power. In effect the second rider becomes a "tail" that allows the flow to detach cleanly and reduces the drag for the leading rider.

Recent studies show that significant drag reduction happens at up 20 meters behind the leading rider in ideal conditions.

Not the answer you're looking for? Browse other questions tagged aerodynamics group-rides drafting or ask your own question.

55
How to prevent drafting?

5
Tips for participating in a large organized ride
19
What are the most significant factors affecting downhill cruising speed?
8
How come some cyclists lean forward at a 45 - 60 degree angle and I don't?
5
Does group riding negate the aero benefit of deep rim wheels?
9
Why are riders allowed to draft behind cars in Grand Tours?
9
Road Bikes: Aero vs. Traditional
13
Why do track bikes vary between events?
5
What's the best way to shield a rider from the wind in a group (most aero position in the group)?
11
Why aren't road bicycle wheels tiny?