Intersection detection doesn't notice me, what should I do?

I have just come to the USA (Bay Area) and got a bicycle to commute to my university. Being new to this place I kept wondering why sometimes I have to wait for a long time for a green light to make a left turn, and then a car comes along and the signal switches to green in ten seconds. Today I waited for a green light for five minutes and it did not come, since there were no cars in my lane. I started thinking I was insane, but then found this: How do Traffic Lights Notice Bicyclists? Sure enough, there are cameras in the intersection.

So how do people deal with this? Wait for a car? Turn on the red light? Use the pedestrian style of making left turns? Wave to the camera?

In most states it's the law that if the signal is malfunctioning you can proceed through "with caution" against the signal. Forester and others have argued that if a signal does not appropriately recognize the presence of a bike it's "malfunctioning" and you're on reasonably firm legal ground to invoke the "malfunctioning signal" provision. (However, I've never heard of this being tested in court.)

Do note that the presence of a camera does not necessarily mean that the signal is video-controlled. It may be that the cameras are there for general traffic monitoring, and the signal is still triggered by buried loop, radar detector, etc. Also, often there are sensors installed for detecting oncoming emergency vehicles that look a little like a camera but are not.

If it is a buried loop you can usually tell by observing the cuts in the pavement where the loop was installed (though of course a buried loop may be subsequently converted to video control). But with a buried loop the best place for the bike, to optimize detection, is more or less directly over one side of the loop, vs being in the middle of the loop. (As a last resort, lay your bike down over one side of the loop. I used to deal with one intersection where I could trigger the signal by just leaning the bike to about 45 degrees.) Note that a steel bike will usually be more effective than an aluminum one, and a carbon fiber bike is unlikely to be detected at all.

Cameras can also be red light cameras. Loops detectors can have smooth pavement. You may be able to figure out which cameras are definitely for signal control, though. I know in my area it's a very different style of camera placed in a different location than the red-light and emergency vehicle priority detection cameras.

Assuming it is a camera-controlled intersection:

If none of that works, depending on the exact details:

If a signal isn't picking you up, it's malfunctioning and needs to be fixed. It's a hazard. Note the exact location, day of week and time of day, and report the hazard.

"You can often see evidence of loop detectors as lines cut into the road surface just behind the crosswalk. Wire sensors are embedded in these cut lines, and it’s possible to trigger a light by placing your bicycle wheels precisely on top of one of the wires to disrupt the magnetic field. Some sensors seem to be more sensitive than others; in those cases where the light isn’t initially triggered, I’ve had some success by leaning my bike over toward the inside of the detector loop. In cases where there are two side-by-side loops, lining up over the center where the two loops meet doubles your chances of triggering the light. Once I understood exactly how loop detectors work, my rate of success at triggering lights considerably improved; I’m currently getting somewhere approaching a 90% success rate on the detectors where I live."

There are a lot of interesting comments there, also!

After using the other advices, to help yourself, you should inform the authorities about the malfunctioning, nonfunctioning device.

Think about other cyclists, which don't know what to do as well.

Can it be, that street planning is done without modern bicycles in mind? If an accident occurs, they shall feel guilty! But better: They should rework their technique, and choose another approach.

In L.A. you have visible coils in the asphalt to detect metal. it's used for red lights and traffic detection. 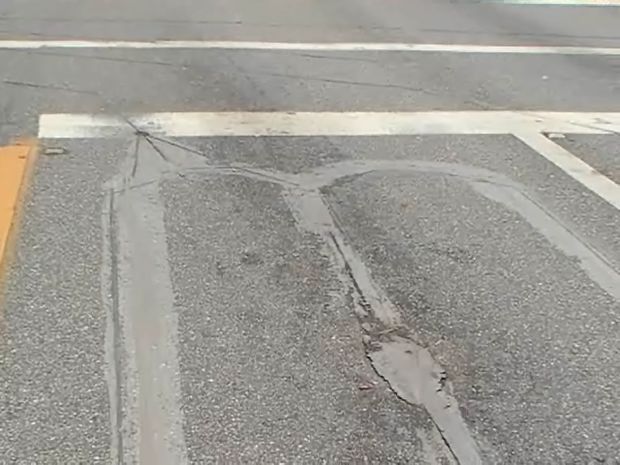 on the bike lanes, there's smaller ones that are able to detect bikes.

when there's only the regular lanes, it will never detect a bike. what i do is if there's a car behind me, i stop on the pedestrian crossing area and hope the car will move forward and trigger the damn thing.

if there's no hope of that and i know it's one of the two take-forever-red-lights in my path, i just go directly to the pedestrian button on the side walk.

... scratch all that! just found a solution when looking for a picture to put here!

solution: magnets under the bike!

11
How do Traffic Lights Notice Bicyclists?

31
Which states or countries have stop-sign-as-yield laws for bicyclists (Idaho stop law)?
23
Passing cars on the right, and later merging into their lane
11
How do Traffic Lights Notice Bicyclists?
25
Discouraging motorists from stopping at an intersection when they have the right-of-way
6
If a lane is going to expand should the left lane be taken prior to the expansion?
7
Road positioning when stopping at an intersection with stationary traffic
7
Traffic lights: double red
9
Which traffic light do I have to follow?
4
How to read the traffic light at this German intersection?
3
Idaho Stop: Should I stop at a stop sign when an oncoming vehicle has a stop sign too?