All seems good, however I've noticed the chain is rubbing on the front derailleur when using the 50T ring on the first 5 gears.
This I take it is due to cross chaining, i know it's not advised to use the opposite sides of the cassette but are they all like this ?

Note : I don't get any chain noise or rub when using the 34T ring in any of the 11 gears on the cassette.

So my question is this - can the front derailleur be adjusted to eliminate the chain rub on the 50T ? or will this effect the indexing on the 34T ring ?

I've read through the PDF from Shimano and they say chain noise is normal, really? can you only use the whole range on one chain ring ?

PDF image below along with the front derailleur. 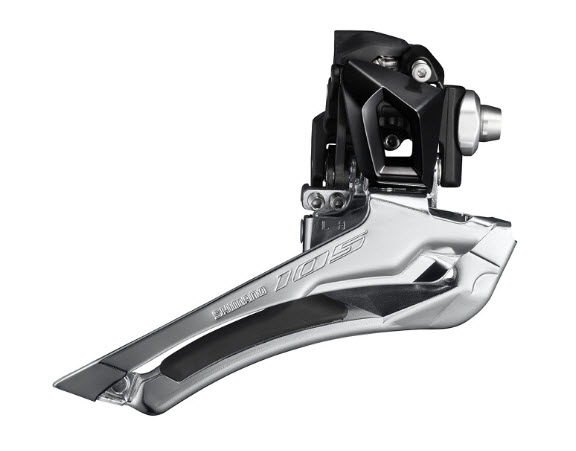 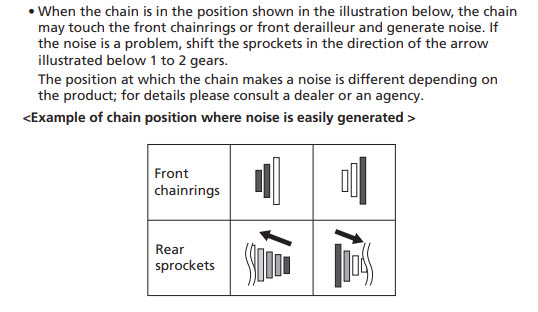 I'm aware of the high and low screw adjustment but don't want to tweak anything if it's going to throw the indexing out of alignment on the 34T ring.

I don't know about the R7000 in particular, but your FD most likely has a 'Trim' function to help with this. This is usually activated by light/half click as if you were going to the small ring but not actually doing so.

I'd say if you are getting rub on the lowest 5 gears in the big ring, but no rub at all on the small ring your FD position is slightly out. It is common to have rub in the 2-3 gears at the extreme ends (small ring high gears, big ring low gears) of the gear range.

Taking a slightly different tack here. The question is related to cross-chaining, i.e. big ring & largest few cogs, or small ring and smallest few cogs. The generally accepted wisdom is that this is bad, and that riders should avoid it if possible. It is one of those skills you can learn - alternatively, you could splurge for electronic shifting and set up your group such that it handles shifting the front derailleur for you, or you could get a 1x system (i.e. single front chainring, pronounced "one-by"). When road.cc put the question to major cycling component manufacturers, Shimano and Campagnolo said don't cross chain if possible. Although, interestingly enough, SRAM and FSA weren't as absolute about it!

Relating cross-chaining to the original question: I believe that on most doubles, it will be impossible to avoid some chain rub in some extreme gear combinations. I have 2 bikes with Shimano mechanical drivetrains. On both of them, the big ring and biggest 3 cogs have chain rub, but trimming the front derailleur (FD) eliminates the rub. Small chainring and the smallest two cogs have chain rub, and trimming the FD doesn't alleviate it. I have one bike with Shimano Di2, and that bike won't even let me shift to small chainring and smallest two cogs (although one can set up the firmware to allow this). I haven't been able to find an objective source for the statement in the first sentence of this paragraph, but based on the answers from Campagnolo and Shimano in the first paragraph, they probably don't design their front derailleurs to avoid chain rub in the extreme combinations.

The green circles are the gear ratios from the small, 39t chainring with a 11-34 cassette. The red circles are from the big, 53t chainring. Basically, when you're in your 53-34, you could just downshift to the 39t chainring and shift to the 25t cog. You would get an equivalent gear ratio. You may not care that much about the 1 watt you'll save, but common wisdom is that cross chaining also wears your chain out faster. (Note: I don't know that anyone has tested that specific claim empirically.) Same in the 39t chainring and 11t cog: the 53-15 gear has the same ratio, about 4 watts less friction, and likely a lot less chain wear.

Also consider, if you were in your big ring and your had to downshift to your 53-34, then very likely you're climbing. If the road gets steeper, you are now out of gears in your big cog. Conversely, if you needed to engage your small ring and small cog, then presumably your pace is picking up, and you're now out of gears in the small ring. In both cases, even ignoring drivetrain wear and friction, you're tactically better off making that shift.

I don't think that Shimano and Campagnolo double drivetrains are designed such that you will never have chain rub in any extreme combination. I believe you can set up a Shimano drivetrain such that there's no chain rub in the big ring if you use the trim function. This is probably why @AndyP said your FD position is slightly out. I don't believe you can set up your Shimano or Campagnolo drivetrain such that you can achieve the above plus have no chain rub in the small ring, even with the trim function. Even if you could achieve this, and it's possible SRAM has managed to design their FDs such that you can (I have no direct experience with SRAM), it is not best practice to do it regularly, and I think it's better if you learn not to. Treat the chain rubbing as a signal to either trim the derailleur, or to shift the FD and do an opposing shift in the rear.

Are there other options apart from trying a SRAM setup? You could try a 1x system, which has no chain rub because there's no front derailleur. However, you will either trade off some gear range at your high and low ends, or you will have bigger steps between gears. Additionally, the Velonews article indicates you'll have slightly higher overall drivetrain friction in a 1x system. Alternatively, you can learn to shift so as to avoid cross chaining and chain rub.

Not the answer you're looking for? Browse other questions tagged road-bike shimano crankset derailleur shifter or ask your own question.