What is this aluminum plate that started rattling inside my Ksyrium rims?

During my last ride I noticed a rattle coming from the rear wheel at slow speeds.

I removed the wheel but shaking and rotating it did no good. After some head scratching I thought about inserting some plastic tubing inside it to isolate where the moving thing is. Turns out there is an aluminum plate that slides near where the rim is welded (see pic).

I drilled a small hole into the loose part, thinking that maybe I can pull it towards the nipple insertion hole (the large hole in the pic, sorry but that's the best I could focus) so I can drill it to pieces. But it won't budge past that point. Only thing I can do is lock it into place with polyurethane foam.

But what is it and why did it start moving now?

Edit: I contacted Mavic and they confirmed that it's a non-structural part that holds the ends together during welding. IMO polyurethane foam is the best bet as it will expand and hold it in place.

2nd edit: FWIW, Mavic replied again with suggestions for fixes. They recommended the center punch method or glue. The warned against using foam as it can create a "heavy spot" that causes wheel imbalance. IME foam is very light, way lighter that the valve stem anyway and it's guaranteed to work so I'll go this way. 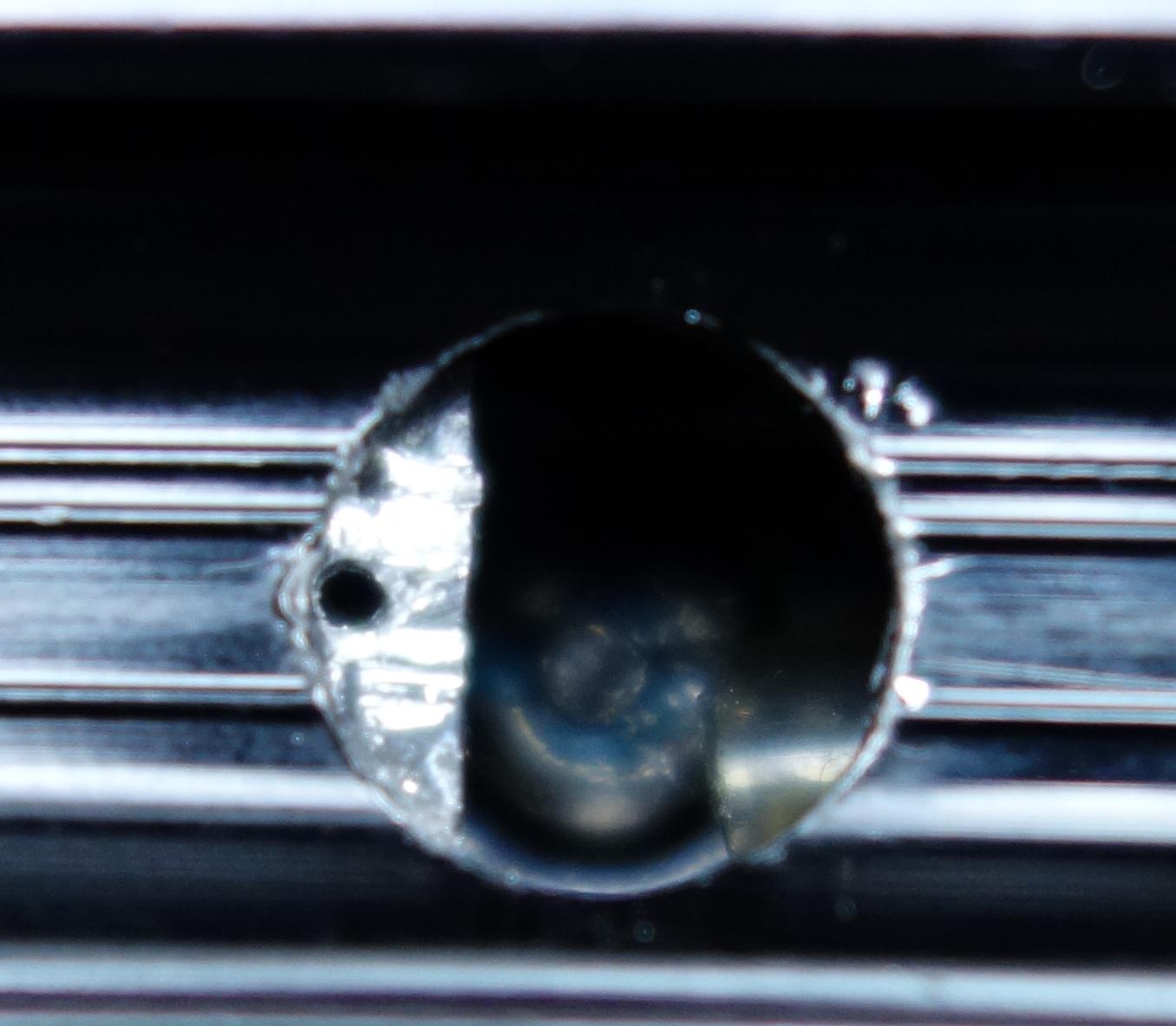 This is a more detailed answer. I cautiously don't agree with Chris that the OP needs to stop riding the wheel, but it does depend on how the rim is constructed. Basically, the aluminum piece is a sleeve of some sort. The sleeves are structural elements in some but not all rims. I believe it is not a structural element in this rim, which the OP described as a 2008 Mavic Ksyrium Equipe. I shall explain why, but this requires a review of how rims are constructed and joined.

There are 3 ways to join rims. Astral Cycles is a rim and wheel manufacturer in the US, and they explain:

A: To understand why the joint matters, it is important to know the process. We roll our extrusion into a helix that will eventually become two rims. After a rim is rolled, it is cut and then requires the two faces from the cut to be joined together. There are three main ways to join a rim: pinned, welding and sleeve.

Pinned: Only the cheapest of rims are pinned. Pinned uses two steel dowel pins jammed into formed or extruded holes in the rim to hold the rim together. Pinning only holds the mating rim faces at the two pins so the brake track and spoke bed of the rim have a lot of flexibility to move relative to each other. This is why some cheaper rims tick in the brakes at the seam.

Welding: This came to the forefront to replace pinning on nicer rims about 30 years ago and was a big improvement. Welding can create a nice, finished looking joint but it has some tradeoffs. The material in a rim is heat treated to increase the strength of the material. Without this heat treatment step, aluminum is not strong enough to be a bike rim. The flash welding process generates an enormous level of heat at the joint area creating a “heat affected zone”. This heat affected zone degrades the heat treatment of the material surrounding the joint making the material at the joint weaker than the material everywhere else in the rim. This is not to say it doesn’t work, just that in our experience this unnecessarily makes the joint the weakest part of the rim. We have full welding capability in our Oregon facility, but with all of our experience, we have decided to sleeve join our rims.

Sleeve: Sleeve joining uses a form fitted sleeve in the exact shape of the inner cavity of the rim to span the joint. It is about 2.5” long and weighs typically 4-5g. In our process, this sleeve is a press fit - meaning it is incredibly tightly fitted and requires a specialized press to insert. We use epoxy as an insulator to minimize the potential for any noise but the epoxy is not a structural part of the joint. What we like about this process is that the sleeve effectively doubles the wall thickness in the immediate area of the joint making it the strongest part of the rim and it does not affect the heat treatment of the material. We then machine the brake tracks after joining so the brake track is completely smooth.

One further point: at least some welded rims are held together by a small sleeve during the welding process. After welding, the sleeve plays no structural role, i.e. it does nothing to hold the rim together. The sleeve also acts as a heat sink during welding. This may reduce the probability that the rim warps, and it may mean that the welding process doesn't affect the rim's heat treatment as much.

So, what went wrong here?

This non-structural sleeve can sometimes come loose. This link from Wheelworks, a New Zealand company, documents this assertion. It names Pacenti and Stans rims. I have personally had this happen on a Pacenti SL23 rim, as have a few other cyclists (the link provides one example).

I believe Mavic Ksyriums are welded rims. If the wheel has a sticker saying "SUP" anywhere, this means it will be welded; the Fitwerks link documents that SUP is a standard Mavic acronym referring to welded rims. Additionally, I have found several links identifying rattles from the sleeves in Mavic wheels, including the Ksyrium Equipe of the late 2000s / early 2010s. The links seem to corroborate that many Mavic rims were welded with a non-structural joining sleeve.

I believe the original poster could epoxy the non-structural sleeve back into place. The Wheelworks site linked previously described one way to do this: drill two small holes into the rim bed straddling the sleeve, inject epoxy through the holes, then put the rim sleeve-side down and let the epoxy cure. This does seem like it could weaken the rim, and I am a bit uncertain about this advice.

In any case, the sleeve in the question above is more accessible. It does seem like the OP could put some epoxy between it and the rim bed, then slide the sleeve back and wait for the epoxy to cure. In some cases, simply adding lubricant has solved the issue; this did the trick on my Pacenti SL23 rims, and it worked for several other consumers. However, the sleeve was in my rim not quite as loose as on the OP's Mavic rim. I could not physically locate it, and I believe it was just rattling in place.

If I am wrong and that rim actually has sleeved construction, then stop riding it immediately. This means a structural sleeve, i.e. the rim isn't welded together, and it's held together by the sleeve plus spoke tension. I'd urge you to verify the rim construction method. If anyone knows that the 2008 Ksyrium Equipe actually is joined by sleeved construction, please comment.

Regarding Astral's assertions about sleeved vs. welded rims, my impression is that most current performance aluminum rims are welded. Thus, the relative advantages between welded and sleeved rims are probably up for debate. I don't think consumers should categorically avoid either welded or sleeved rims. Having the non-structural sleeve come loose should not be a common event, either.

That plate was probably reinforcing the join in the rim, and the rim is significantly weakened without it, probably to the point where it's no longer useable. Only the manufacturer can know whether it's structural or not, as these plates are used as both permanent and temporary (on welded rims) fixings. If you've also drilled the rim, it won't be strong enough to ride on.

I contacted Mavic about the issue and this is their answer:

Thanks for your email and we are sorry to hear that you have developed a rattle. The loose part in the rim is from when the rim was welded together during manufacturing, they use a small metal plate to hold the rim in place when it is being welded and it is this that has come loose in the rim. The good news is that this is not a structural issue, however the bad news is that due to the size of the plate compared to the holes in the rim (valve/spoke) then you would not be able to fish it out. If you use something to hold it in place to stop it from rattling round then this may work, however if you use anything which adds weight to the wheel then this may have an effect on the rotation of the wheel as there will be a heavier spot on the wheel. I am going to send an email to a colleague in the service centre to check and see if they have any recommendations for holding the part inside the rim. As soon as they get back to me then I will forward any details on to you, but please let us know if there is anything we can help with or if you have any further questions in the meantime.

Thanks for your patience whilst we have been looking into your case details. Our colleagues have been in touch with some possible recommendations: You can try and maneuver the plate back into place and use a punch to punch it back into position, this can work sometimes, however it is not always successful. You could try to use a glue to hold the plate in place on the inside of the rim. This would be better than using a foam or similar which would create a heavy spot in the wheel, and this can lead to vibrations in the wheel when riding, and at speed this could be dangerous. Unfortunately as the plate is in the internal sections of the rim then there are only limited options to securing it again and it can not be removed either. I hope that one of these methods works for you, and please let us know if you have any questions or if there is anything else we can help with.

10
Crack in aluminium rim?
3
Crack on bike wheel rim
7
Cycled through pothole on carbon frame - damaged?
4
How do I compare seemingly equal wheelsets?

8
Should I seal the open spoke holes on my front rim?
3
Strange noises when using brakes