Prescription glasses getting dusty and greasy

I cycle to work each day, about 2.5 miles in each direction through a moderate sized town on paved roads (I don't use any dusty trails or go offroad etc).

The climate is somewhat dry and arid with temperatures varying between 30c and -15c (I wear a scarf covering my nose when it is much below 0.) This issue does tend to get worse when it's very cold, but that could be due to it being more dry then also. I am in Colorado, USA if it helps, not right in the mountains but still at substantial altitude, thus the arid climate.

However when I get to work each day my glasses invariably seem to be covered in both road dust, which I know how to deal with, but also a greasy film like layer which I do not notice until I try and clean off the dust then ends up smeared everywhere and requires several through cleanings with soap, cleaning solution and cloths and is nearly impossible to fully remove, giving a cloudy smeared look to the lenses.

This is less of a problem on my way home as I can soak the glasses in appropriate solvents which eventually seems to clear them fully, but at work it really makes my day difficult.

I would really appreciate any advice on either different prescription glasses I could use to avoid this issue, or some way to avoid this stuff depositing on them in the first place, or even something to wear over them. Though if possible I would prefer avoid anything that would look enormously out of place doing road biking in a city (if it makes a difference, I am female and in my late 20s). Given I mostly road bike I am not an expert on the various equipment used for this kind of thing.

Eventually I might just get laser surgery to bypass the issue entirely but this is not an option for the next 6 months at least as I am recovering from another medical procedure.

An ex-coworker of mine got a pair of goggles that he could put over his prescription glasses. In his case not so much because of dirt on the lenses, but because wind bothered his eyes.

A lot of the ones you'll find are the high-durability ones for mountain bikers (with thick heavy frames), but it is possible to find lightweight (and not so ugly ones) like these: 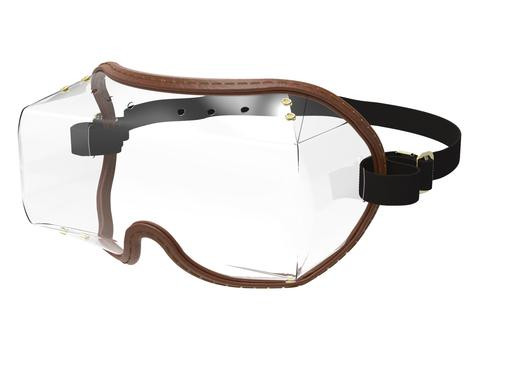 (Note that this is not a product recommendation; I don't recall the make of what he actually has, this is simply the closest in appearance that I can find in reasonable time.)

The other answers assume your lenses are contaminated by external sources.

A different alternative is that you're the source of the greasiness, from sweat or perhaps hair products or similar. Greasiness implies a biological source to me.

Check your helmet's foam padding, and if its manky then remove it carefully and wash it. You can also try a headband or even a cap/casket under your helmet to "capture" sweat before it gets too near your lenses.

There are cycling helmets with integrated detachable visor. The visor covers the eyes. Yet the helmet is open below.

I see them frequently on my commutes on rainy days. Most are urban style helmets. Ventilation might be a little lacking for very high temps and high exertion. 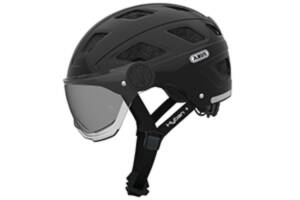 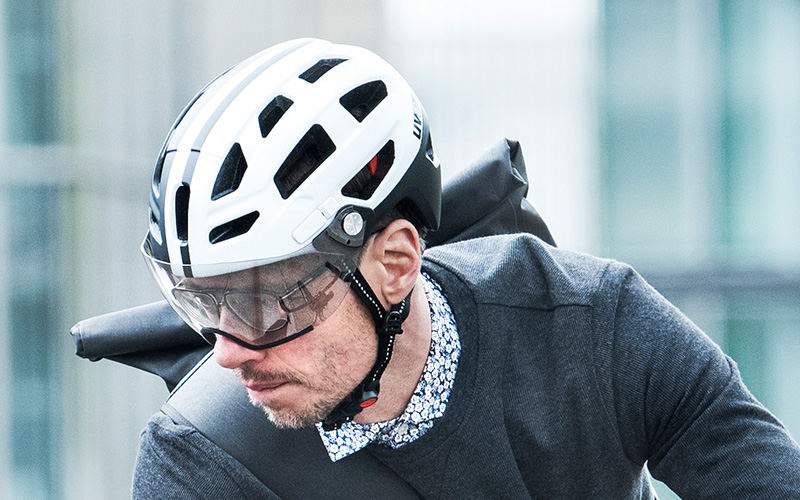 I can't think of a way to keep your glasses from getting dirty. It sounds like the dirt could be carried by the air. As you ride the air hits your glasses and gets them messy.

If you get laser surgery so you don't need glasses then all the stuff you clean off your glasses will go straight into your eyes.
You need something to protect your eyes and is easy to clean.

There are some interesting choices if goggles are an option. They make mountain bike goggles that have tear-offs - disposable plastic covers. When one gets dirty they tear it off and are able to see again. I don't know of any goggles that fit over glasses and they might look a little silly while on a road bike.

It would be nice if they made tear-offs for regular glasses. I couldn't find any

Not the answer you're looking for? Browse other questions tagged commuter road equipment city glasses or ask your own question.