I'm looking to buy an ebike for my partner, and have been researching how best to store them to protect them from the weather.

We live in a south-facing house in a New Zealand city notorious for its southerly storms and icy horizontal rain. There is no shelter at all on the outside of the house, and there's very little space to store a bike on the inside. The current (pedal) bikes we have are both stored outside.

The advice I see online for storing ebikes seems to be some combination of old, somewhat contradictory (geared towards different levels on the hobbyist - true-believer-enthusiast scale) and geared towards places with deep freezing winters, which we don't have here.

My question is twofold:

It would depend on the bike itself. The electronics on a high end e-mountain bike are pretty much waterproof, and the bike itself is susceptible to the same issues as any bike from rain etc.

Regardless, any bike will have its life and service intervals shorten by being left in the rain.

I'd suggest a small shed to store the bike in or at least covering it with a tarp would help a lot.

but ultimately no, e-bikes cant be left in the weather with no adverse affects like you could with a car.

This is not a full answer, but i had my e-bike outside for 2-3 months because we had no room in the shed. This is in the Netherlands which has a reputation for rain but it was not that bad during that time-frame. I did try to cover it, but the covering came off often. It was just a sheet of plastic, maybe you can get a motorcycle cover.

After this the bike set unused in the shed for 2 years, it's 10 year old battery died, I had it replaced and now I'm happily cycling 15kms to work.

YMMV. My bike is an old Koga Miyata Tesla with a NiMH battery. Check how the battery reacts to frost, maybe you have to charge it inside.

@Rhys already said that in general, bikes will do very badly if left out in the rain. The mechanical components will get destroyed.

Focusing on the lithium ion battery's usability: their charge capacity is affected by temperature. This is an inherent limit due to chemistry and physics. Batteries simply do not generate as much power when cold because the reactions in the battery slow down. Electric cars do lose significant range in cold weather. Moreover, their batteries appear to have internal battery heaters to get their batteries to their preferred operating temperature. I do not believe these heaters are common on bike batteries.

Bosch, which makes electric bike motors, recommends that if you're storing your bike in an unheated area, you remove the battery when parking and bring it indoors. They also advise that you charge the battery at room temperature. As outlined in an answer on a different SE site, if you charge a lithium ion battery under freezing temperature, you will damage it irreversibly. Good batteries are expensive, so you don't want to do this. Note that you don't want to charge the battery while it is under freezing temperature, so you may have to wait for a battery to warm up a bit after you bring it inside to charge.

I can't find anything specific on how storing a lithium ion battery at cold temperatures affects its service life. So, simply being outside for a long time at temperatures above freezing may be just fine, as maybe corroborated by this SE answer and this post by a battery manufacturer.

Side note: Bosch's recommendation leads me to suspect that their batteries don't have heating circuits. You can't take your Tesla's battery out and carry it into your office, so clearly the heaters are vital for cars. But they'd add weight to e-bikes, which are already quite heavy.

As pointed out by @Rhys, higher end bikes may have waterproof batteries. Whatever bike you get may not be this waterproof. You might want to check the battery's water resistance rating for interest. It's sort of a moot point, because I would highly not recommend storing the bike uncovered - never mind the battery, a lot of the mechanical components will fare miserably if exposed to weather (chain, hubs, bottom bracket, and headset).

I assume that that's Wellington and not Invercargill :-).
I an electrical design engineer, not a cyclist, and accustomed to motorcycling survival in NZ in decades past. Most of the advice given by others is OK - ignore outliers in either direction.

Charging LiIon at below freezing is usually a bad idea. It depends somewhat on battery model and brand, but only somewhat. Above freezing is generally OK.

It would be relatively easy to make a "shedlet" that removed most of the weather effects. eg a lean to sheet of ply (roadside surplus) forming a triangle against a wall with whatever paint it took to make it look half decent and last a few years. Fasten at top so it doesn't blow away or bang in the wind. This removes direct rain impact and wind speed reduction 'can't hurt'. Covers made from ex billboard tarps are cheap and utterly waterproof but more annoying to use and to keep in place than a sheet of wood. PVC tarp tacked behind a layer of roadside-found pallet pieces would be waterproof and more robust.

You'd hope that electronics and battery packs would have a reasonable degree of weather sealing, such as would be reasonable for equipment liable to be used in typical bicycling environments. That hope may not be matched by practice in some cases. While you could add adequate sealing if a manufacturer has not done so, the need to do so suggests a general lack of design adequacy or care. The suitably competent can turn sow's ears into something somewhat resembling silk purses - but the effort is usually not worthwhile.

I'd expect battery packs to be able to withstand a 'hosing down' at low pressure. Electronics should have boards conformally coated and/or sealed to withstand water jet washing levels of pressure. Claims of IP66 sealing, if valid, indicate adequate sealing.

Overall, if it did not fall apart from the weather effects of day to day use then I'd expect a modest shed of the type mentioned above would be all that was needed.

If you are in Invercargill cold is liable to be a problem when winter battery charging.

Not especially. Rain actively degrades any bike, electric or not.

Bikes use steel for most gears and chains, which rusts, and aluminum for low-range gears and everything else, which corrodes galvanically on contact with steel in a wet environment.

There is no structural protection from the rain like a car's body. Bike lubricants can be washed off by the rain, so their protection goes away quickly as well.

As much as a normal bike.

A day in the rain won't do meaningful damage, except for washing off some chain lubrication, if you get the bike dry soon. A season in the rain will have you come back to a bike that's aged as much as it would have in a couple years of active riding with insufficient maintenance. This will manifest in degraded gears and chain, less smoothness in the steering, considerably noisier ride, clunkier controls.

It will still ride after one season, but it's best to avoid doing it to any bike that's held to a standard higher than "it does ride".

The electrics, if factory-made and intact, will be the least-affected parts.

What about a folding electric bike so you an keep it inside? They have small wheels so are not as good on rough ground, but can be seen daily on London's roads. 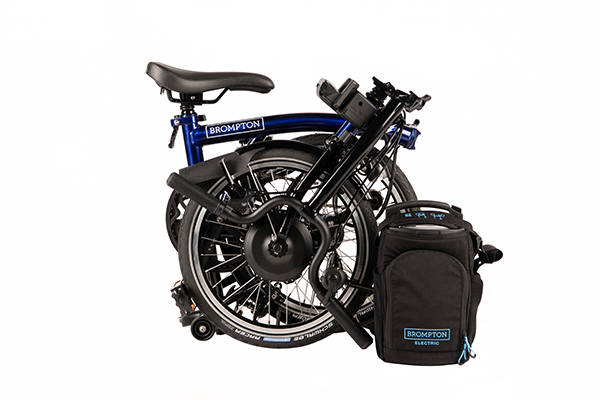 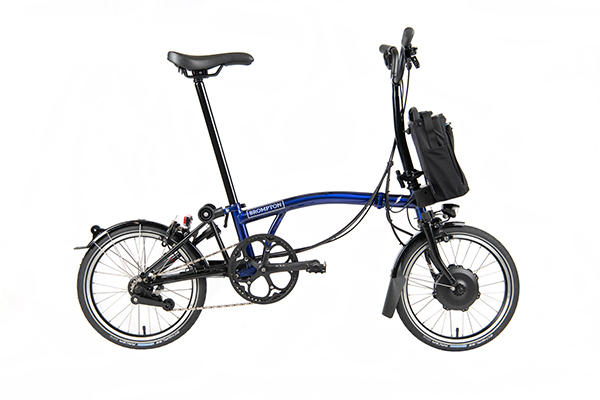 There are many makes, and also 3rd party conversion kits, the images are of a Brompton.

Not the answer you're looking for? Browse other questions tagged electric-bike storage rain or ask your own question.

20
Winter maintenance before putting bike in winter storage?
7
What's the best way to lift a bike onto a storage hook?
1
What is the maximum safe storage temperature for a bike?
0
Has anyone tried this “poor mans” homemade electric bike idea?
4
Efficient bike parking/storage that younger kids can handle?
15
Safety - Improve braking power in wet conditions
1
Tips for amending apartment/condo bylaws around bike storage
2
Minimum dimensions of bike storage shed
6
What's the best way to stow (winter storage) an all-carbon bike?