I am not familiar with track cycling at all but was wondering what type of bike computers, if any, are used in track cycling (in competition as well training)?

I am assuming that at least in training some people will use bike computers in order to keep an eye on speed, cadence and possibly power but I have read somewhere that in some velodromes the use of bike computers is discouraged as it is seen as a distraction and thus a potential cause for crashes? I would be grateful if somebody who has track experience could shine a light and "what is usually done", i.e., would I be able to take my road set-up (Garmin Edge 520) onto the track without getting funny looks?

In track (velodrome) racing, visible cycle computer displays are generally not permitted. So the only funny looks will be from the commissaire who will request it be removed.

This is the UCI rule:

3.2.005 Riders may carry no object on them or on their bicycles that could drop onto the track. They may not bear or use on the track any music player or radio communication system.

In addition, any electronic device with display (for instance speedometer or powermeter) must be hidden to that it cannot be read by the riders.

My track bike has an SRM power meter and SRM Powercontrol bar mounted computer. The display may only be used in this manner for training. I used to use an under saddle mount for racing so I could still record the data. In the early days of this rule being implemented I was able to use a cover on the display to comply but that soon gave way to no devices permitted on the handlebars. Then we started to put computers on the top tube behind the head tube, and that was frowned upon as well. So we moved to under saddle mounting sort of like this: 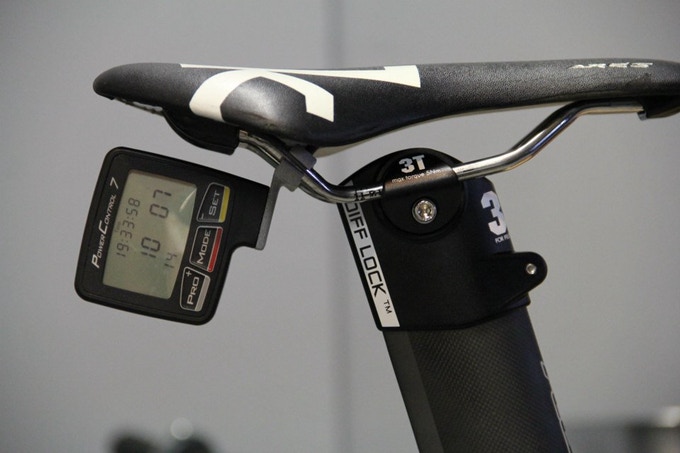 GPS is of course useless on indoor velodromes, and not that great on outdoor ones as its resolution when changing direction is not that great. If you ever look at the map plot from a GPS device of a bike ridden around a tight enough curve at a decent speed, like on a velodrome or descending a twisty road, you'll see the track plotted by the GPS data cuts the corners. Speed is assumed to be the straight line distance divided by the time interval, when actual distance is around a curved path.

This is why on tracks we prefer the use of wheel speed sensor. Better precision, resolution and accuracy in wheel speed measurement. Of course wheel speed on a velodrome doesn't equal bike speed, since the wheels travel a different path to the rider (wheel follow a larger radius arc due to the lean angles involved in riding on a track).

It's possible to compensate for this with some maths and knowledge of the track's geometry. It sort of depends on what you need the speed data for. e.g. for aerodynamics testing you really want to know the velocity of the rider relative the surrounding air, and not the speed of the wheels since it's the rider that makes up the bulk of the aerodynamic drag.

For the track taster session I did a while back, anything like a bike computer, GPS etc was expressly prohibited. I think because anything 'loose' shoved in a jersey pocket might fall out and cause a hazard for other riders.

When commissairing track races in the UK, I (and all of my colleagues) insist on the rider as an absolute minimum having the GPS/Computer/Power Meter on the underside of the stem so the display cannot be seen, or for preference mounted behind the seat-post or back of the saddle out of temptation's way.

alexsimmons has quoted the relevant UCI rule in his excellent reply and most (if not all) national federations will also have their own rules regarding the use of computers in track racing. For example, the relevant British Cycling regulation is contained in Technical Regulation 3.2.4: "...any electronic device with display (for instance speedometer or powermeter) must be hidden so that it cannot be read by the riders"

Simple cycle meters, those from pre-GPS, still exist. Although they'd need magnet actuated wheel and cadence sensors they have the advantage of being tiny thus fitting easily under the saddle. If they are ANT+ they would couple with motion sensor activated hub and crank-arm sensors that don't require magnets.

On a Garmin GPS at least, speaking from experience with a roller trainer, you may switch sat reception off and just use ANT+ heart-rate, speed and cadence sensors. Your activity will be registered in the way the unit would register a stationary trainer session. A light and simple device without fancy routing capabilities would do the job nicely and could even be mounted under the saddle with some skill.

A GPS watch that is ANT+ or Bluetooth capable should work in the same manner. If the track has a non metallic roof GPS might even work properly.

Not the answer you're looking for? Browse other questions tagged bike-computer gps track-racing or ask your own question.

0
Bicycle GPS Devices
3
Edit gps recorded track
7
Cycling computers fits on any wheel size?
3
How long do Garmin's cycling GPS devices take to get an initial GPS lock?
0
What is the use of GPS/Elevation on Bike computers
4
Windows Phone as a Bike Computer - What is the current State of the Art?
21
Why is track cycling done counter-clockwise?
5
Do GPS computers always need online account
1
Is this summary for seeking an understanding of the landscape of cyclocomputers in 2020 accurate?
5
Are there any bike GPS computers / devices that can create routes themselves out on the road?