Why does a tire patch leak near the lip, and how to properly patch the flat?

I had a flat in my back wheel because the tire was worn out. I removed it and patched it as in these directions, except for the abrasion with sandpaper, which I never do. I put the tire back in and mounted the wheel, but it deflated again overnight. The leak is under the lip of the patch, which didn't completely seal, as in these pictures: 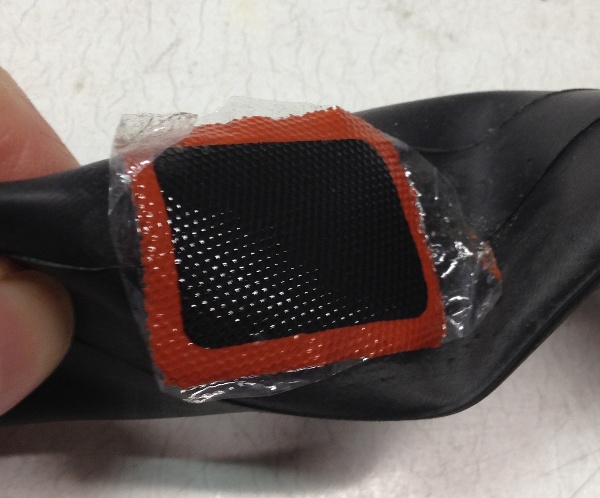 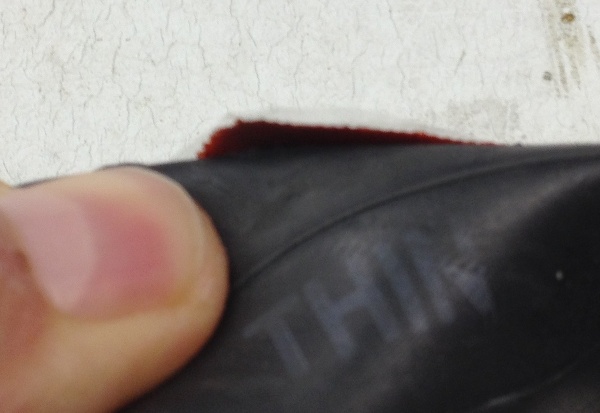 The hole was around 0.5mm so it is well covered by the rubber cement and the black area of the patch. I have patched many dozens of flats without this problem.

Why does the flat still leak? Is the orange area different from the black area, and does it have to be perfectly glued to the tire?

Sanding the patch area really shouldn't be considered optional. Innertubes are coated with mold-release compound that prevents the vulcanizing agent from reacting with the rubber. You can abrade it off or wash it off with soap and water. The sandpaper probably also creates a little more surface area for the vulcanizing agent to react with.

In the case shown here, the vulcanizing agent doesn't cover enough area under the patch, as Argenti commented, so the edges don't have a chance to adhere. In my experience, the tube of vulcanizing agent usually dries out before I've used all the patches that come with a kit, so there's not much point being stingy with it.

The edges of patches tend to come unstuck because you are attaching a stiff flat patch to a curved surface. To avoid this, make sure that the vulcanizing solution covers the entire area of the patch, apply pressure to the entire patch while it is curing, and wait a sufficient amount of time before reinflating the tube. And as others have commented, abrading the tube before patching does also help get a good seal. Sometimes you’ll get a secure patch without it, but your chances are much better if you do it.

I took all of the above suggestions: I removed the previous patch, applied glue generously, let it sit for 10 minutes, and applied the patch. I took the "thorough pressure on the patch" too literally and used clamps; the tube adhered to the clamps and had another puncture, which I fixed in the same way without the clamps. It all works now.

I had used too little glue because the patch had the width of the tube and the glue on one side didn't entirely contain it. I started using smaller patches instead.

All my punctures have worked without sanding, except maybe three occasions similar to this one where I ended up putting a patch on top of the previous patch. @Criggie suggested that one could rip the previous patch and that works.

7
How to Patch a Bike Tube?

2
How could I have fixed a flat tire?
6
Flat tire: white liquid inside the tube
5
Does riding on the sidewalk make it more likely to get a flat tire?
2
Why would each patch produce a new leak before resintalling tube?
5
Tire Continually going flat
13
Mystery flat keeps happening 3-5 times a week. Do I weigh too much for my tires?
2
Inner tube valve cut from stretched rim tape?
8
How to best quick fix worn out tyre
5
Does leaving a flat for months damage the wheel?