What is the difference between Shimano TZ50 and Shimano RD-FT55-SS? 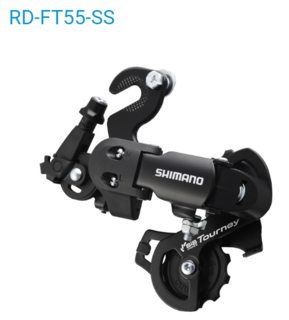 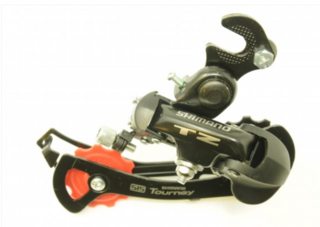 I understand, that both of them a very basic. (But it's the only options for rear derraliuer with reverse hanger.)

A quick compare of both linked websites shows that the TZ50 is rated for a total capacity of 34 whereas the FT55 is only listed as capacity of 17.

Both are rated for a biggest big of 28 teeth, which is also their smallest big cog supported. IE its 28 tooth only.

That means the FT55 is really only intended for a 1x setup, because 28-11 is 17 which is its maximum capacity.

The TZ50 is rated to be used on both a single and double chainring.

Additionally, the FT55 has a pulley wheel in the rear to reduce the amount of outer cable required. Your inner cable could be shorter and have less loop to catch on things. All up, I suspect the FT55 is intended for folding bikes with a 1x 14-28 freewheel.

These are $10 / £10 / €10 parts. Realistically, noone cares about weight or colour or anything at this end of the parts spectrum. Even the orange jockey wheel is pretty irrelevant.

And remember Shimano's specs are very cautious. I personally have used a TX-50 6 speed derailleur very similar to this, and it now runs an 8 speed cassette with a triple on front and the cassette ranges from 11 to 32 tooth, and works well enough. 30 tooth would have been less clattery, and I suspect 34 tooth wouldn't work at all.

Not the answer you're looking for? Browse other questions tagged shimano derailleur-rear or ask your own question.