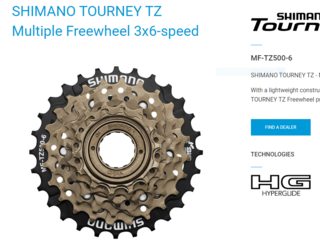 They're both freewheels, so likely the design has been around for decades. At this price point in the market, noone really compares features, a user is more interested in specs like max/min toothcount and number of cogs. Thats about it.

Specs are identical - they're both 6 speed with 14 tooth minimum and 28 tooth maximum cogs.

The TZ20 is probably a later version, possibly made in a different way to reduce manufacturing costs. Notice t that the TZ500 has a black large cog, where the TZ20 has the same colour cogs all the way through.

Minor difference is that the TZ20 pictured has a black plastic spoke protector included in the picture, whereas the TZ500 does not show one.

As for being fake, that's always possible given the age of these designs. But there's also minimal profit in these low-end low-value items, and realistically even a fake one should work fine.

Not the answer you're looking for? Browse other questions tagged shimano cassette tourney or ask your own question.