I've got this mountain bike, it's probably about 12 years old now, and it was sitting in the shed for years, in dry conditions. I recently decided to strip it down and I was going to respray it as it was rusted and peeling.

The thing is, I don't know what kind of metal the frame is made of, but it seems to be a total and absolute rust magnet. The paint had totally peeled off of a lot of it, and there was rust everywhere underneath about 60% of the frame. I used paint remover to remove the rest of the paint, and the next day all these "clean" parts had rusted as well!

I went at it again with wire brushes and sandpaper, and got most of the rust off, and came back the next day and it was rusted again! It seems to be (I'm assuming) rusted inside the frame too, there's, like little (air?) holes in several parts of the frame.

So, basically I'm wondering if it's even worth the bother to clean and respray it, will it just rust again?

Is it just some kind of cheap junk metal\frame? Should I just prime and spray it anyway, or will it just rust again in a few months, and all the paint fall off again?

The rest of the parts, while some were rusted initially, cleaned up just fine, and they've been sitting for a few weeks now with no signs of rusting again. So it's just the frame that's the problem.

I was using paint remover to remove the paint a few weeks ago, and about 50% the paint just fell off where it was rusted underneath, and the rest of it was really stuck on there. Everything that's not rust is the leftover grey paint. I was going to start priming it at this stage, and so I went at it with a wire brush and sandpaper last week and I had just about all the rust removed.

Then I was busy for a few days, and it was sitting in the kitchen, and I came back and it was like this. The rust on it is like a layer of dust and particles, that almost rub off on your hand if you touch it.

The second image is one of the holes in the frame. It's like the manufacturers put them there on purpose, but I don't know the reason. I can hear "stuff" in there if I shake the frame, I thought it might be sand if it was sandblasted.. 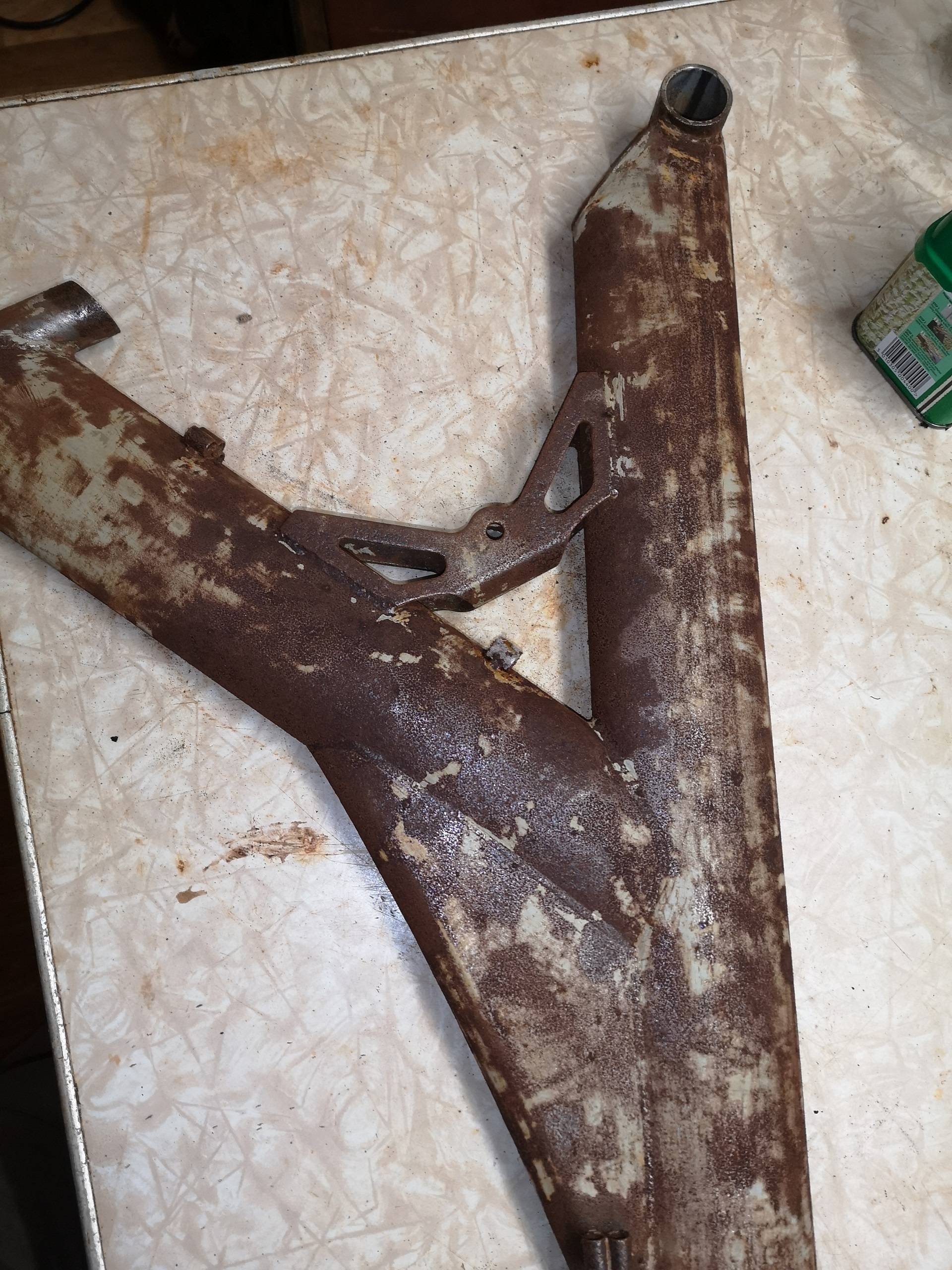 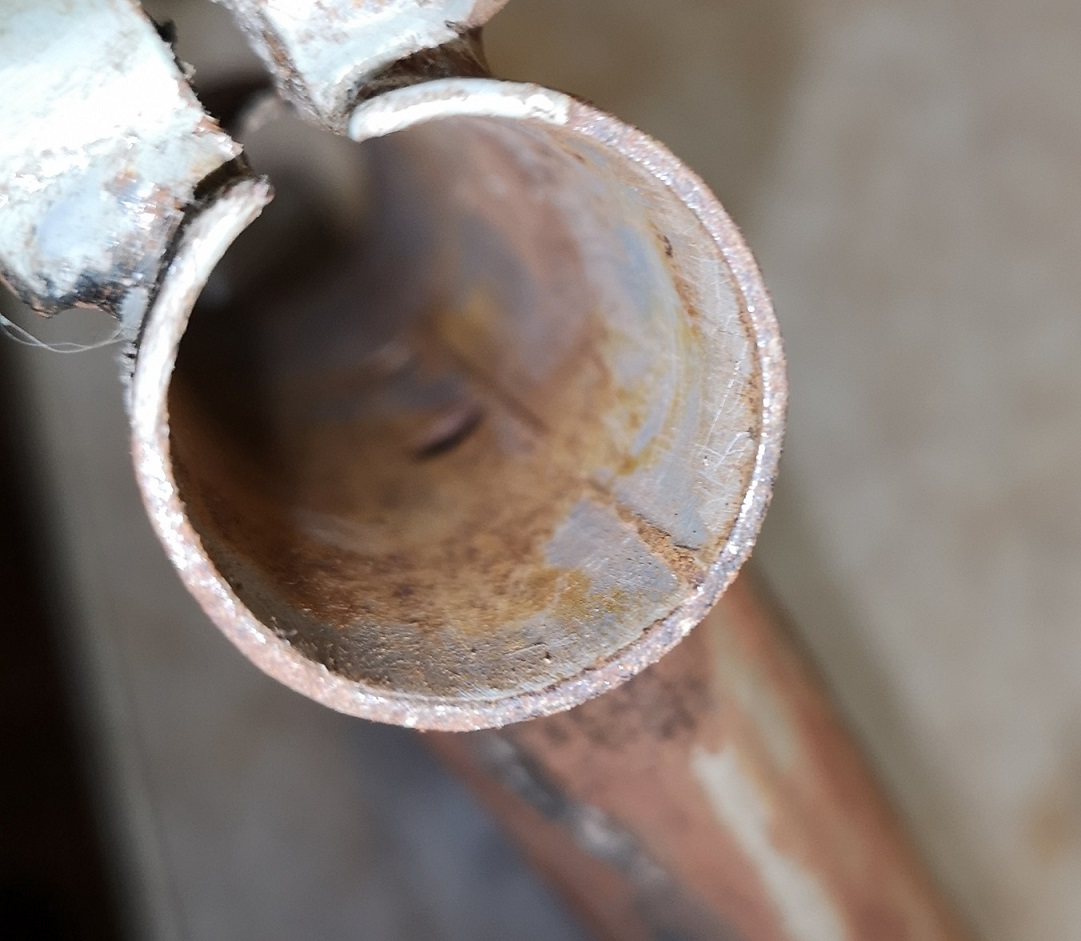 The fact that the frame rusted and the paint came off over 12 years is probably the fault of the paint not the steel. Even high quality strong steel alloys rust. Also, the conditions in a shed may look dry but there could be high humidity. The frame you have may not be the best, strongest steel alloy, but if you like the frame it’s worth refurbishing.

If you strip steel down to bare metal it will react with oxygen and water in the air. You need to protect the metal with some form of oil or primer paint.

If you want the frame to look nice you’ll need to prepare the surface carefully and apply primer coats, color coats and clear coat. You can find many resources in how to do that in the internet.

What I would do is protect the frame with WD-40 or similar while removing paint and sanding to get a good surface, then thoroughly clean with solvent and apply the first primer coat in one session. You don’t want the environment to be too humid or cold when you are doing this.

Update: I read through your question again and saw you mentioned rust on the inside and holes in the frame. You can remove rust inside with rust remover chemicals, but if the frame has holes all the way through (rather than pits) it's likely junk.

If it's bubbling up under the paint it's probably rusting from the inside, which would explain why it carried on doing it after you cleaned the outside up. You need to get some kind of oil into the frame but if it's so bad it's bubbling up under the paint I would scrap it frankly as bike frames don't have a huge amount of redundant strength being designed to minimize weight.

Rusting of a consumer product steel is 99% the result of surface conditions and environment, not the steel itself. I understand some high strength frames are "chrome moly" ( eg 4140 ) , this 1% chrome would give a small advantage in corrosion resistance compared to carbon steels. To measure this small difference , a sample of each steel with the same surface condition , would need to be simultaneously exposed. No difference between these steels would show if they had good paint coatings. Weathering steels typically contain small amounts of copper, phosphorus, chrome , and possible others ;But are left with a bare rust surface which is adherent - not painted. To paint a previously rusted surface , treatment with phosphoric acid and additives ( eg. Navel Jelly or other "conversion" treatments) will help before priming. First remove as much rust as possible. .

Rusting of steel requires the presence of water, so move the frame and the location where you're doing work on the frame to somewhere dry if possible. Assuming the environment in your shed is the same as outdoors, it probably gets plenty humid in there especially when it's raining.

Consider paying a powder coating shop (or car body repair shop) to sandblast the frame and powder coat it. The DIY frame spray painting approach is also an option, but be careful to make sure you use the right protective equipment (respirator, etc.) depending on the type of paint that you use; 2k spray paint and clear coat can be very toxic. There are lots of guides online for DIY painting of bike frames, so check these out if you go that route.

Not the answer you're looking for? Browse other questions tagged rust or ask your own question.

21
Dealing with rust on a steel frame
10
Are rusting screws a sign of cheap/bad material?
7
Should I Get the Paint Job Touched Up
8
How can I determine whether rust has made my bike unsafe?
9
Is my bike getting ruined?
4
Clear coat on top of old paint in order to preserve it/frame?
4
Is this bike salvageable?
14
What caused all my chain links to become stiff after a month in a tent despite having been cleaned and lubed beforehand?