I'd like to avoid solvents, or use less solvents when I re-wax my chain.

Are there any features I need to have in an ultrasonic cleaner?

My current chain cleaning process is

Could I get away with a cheap ultrasonic cleaner and pour in boiling water + maybe a little detergent instead of using the solvent I currently use to clean my chains?

Some notes from my experience:

If you are in a 220-240 volt country avoid the cheap Chinese cleaners, they are designed for 110 volts and remove a rectification diode as a hack to make it work on higher voltage. This doesn't work well as the peak voltages are still higher and the output transistors fail.

Secondly, I found ultrasonic cleaning in just water and soap is nowhere near as effective as using a solvent. I use kerosene, however its very smelly so I only use it outdoors, but it does clean everything well.

Lastly, I haven't noticed much increase in chain life vs just wiping with a rag and oiling the rollers. Because of this I don't bother ultrasonic cleaning chains unless I am cleaning something else like a cassette. My theory is the oil aids in flowing out contaminants in the rollers but I have no evidence to back this up.

Some models have multiple frequencies. Most operate between 28khz and 120khz. Depending on the frequency the size of the bubbles that form on the surface of the object changes. Lower frequency gives larger 'cavitation bubbles'. The larger the bubbles the more cleaning action happens when they implode so this would be desired for cleaning a chain. For fragile objects one might want to aim for smaller bubble size. Some expensive models are even infinitely adjustable (the frequency)

Keep in mind that if you're buying from China or if you're buying a rebranded Chinese product the listed tank capacity if often exaggerated. The actual capacity of a 3L tank might be 2.6 liter for example. I've seen quite a few of such examples on aliexpress reviews. The bigger the tank the larger power the transducer (the ultrasonic vibrating element) must have.

Some models allow the user to limit/adjust the transducer power. Thus removing the need to buy a separate machine for less aggressive cleaning.

Check this page for some more info: https://sonicpro.com/choosing-an-ultrasonic-cleaner/

The heating of the chain in an ultrasonic is critical to removing the wax if that is the method you use for protecting the chain.

I also wax all of my chains as I detest the oily residue that inevitably builds up on wet-lubed chains, then transfers a greasy stain to any surface it touches. My waxed chains can go about 500 miles between cleaning/waxing (less if rained upon), which works out to about once per month during the main riding season.

I know it sounds involved but the whole process literally takes only about 20 minutes and, like I said, the heating of the ultrasonic and wax takes longer than the actual cleaning process.

I maintain two waxed chains for every bike and label them. When one gets dirty or rained on and breaks down the wax, I swap them out and try to do multiple chains in one ultrasonic/waxing session. 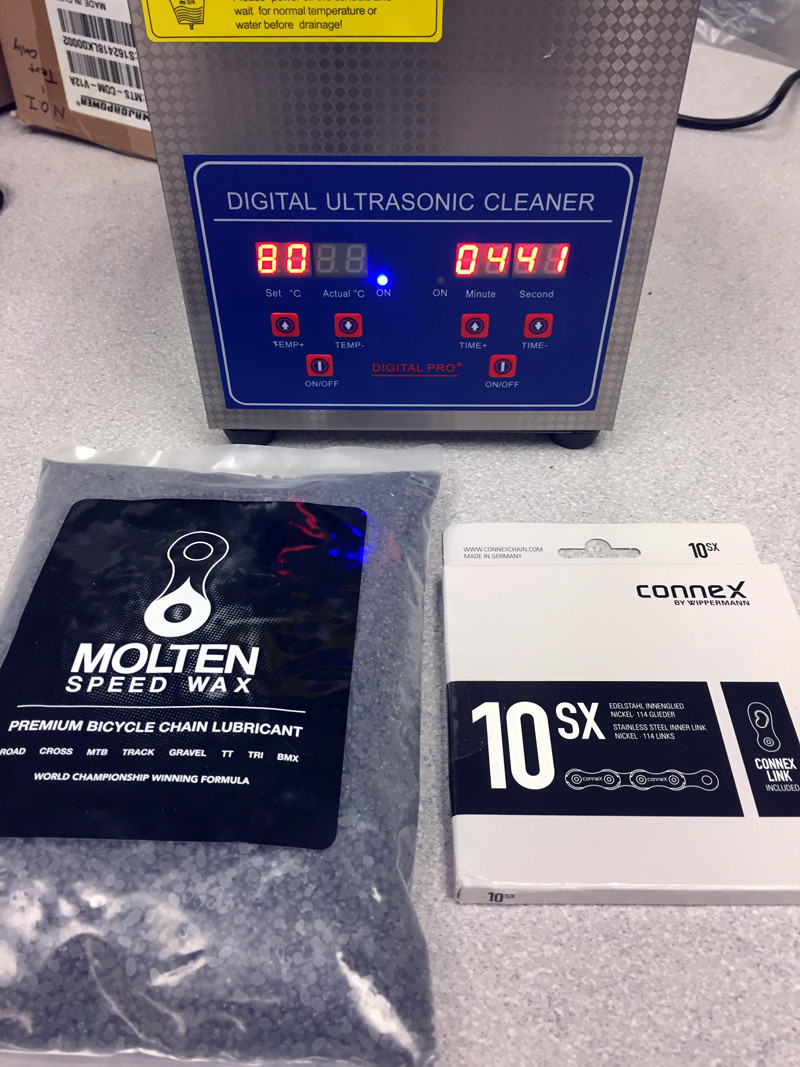 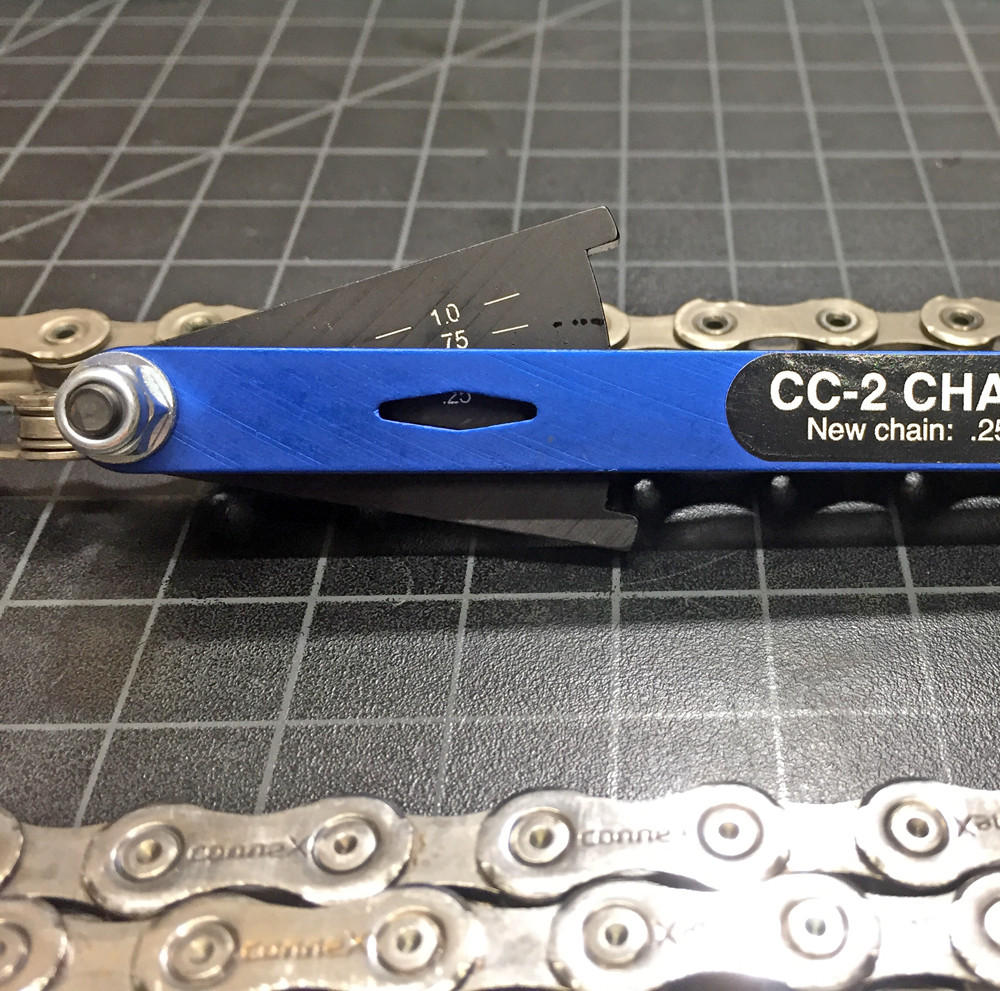 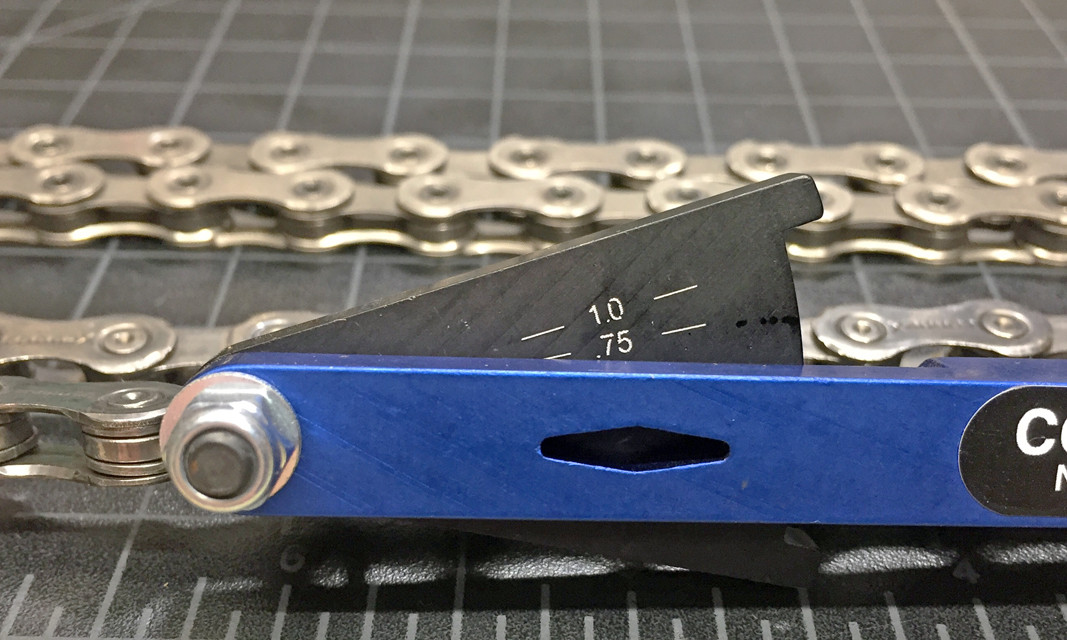 I just noticed that the OP was asking about the cleaning process for re-waxing a chain, not for cleaning a new or previously wet-lubed chain. If using hard paraffin wax with minimal oil content, I believe that solvent cleaning when re-waxing may be unnecessary. There appear to be two schools of thought on this issue.

Molten Speed Wax, which has sold paraffin-based wax for some time, says that if a chain was ridden in dry or mostly dry conditions, it can simply be dipped in the wax pot without prior cleaning. The contamination inside the chain will melt off into the pot of wax. If the chain was ridden in the wet, then it's good to swish it in boiling water. This will melt off the wax on the chain, and with that any contamination that's in the wax. Zero Friction Cycling, which distributes MSW and some other lubricants in Australia, concurs with these instructions.

It's true that with this method, the pot of wax will gradually accumulate contamination, and eventually it will need to be replaced with new wax.

Cleaning the chain before waxing

The alternative is obviously to clean the chain before immersion waxing it (i.e. before putting it in a slow cooker or other device full of molten wax).

Wax treatments need to be refreshed regularly, or else they will sound noisy and wear will accelerate. I've heard 200 miles as a guide for wax service intervals, less if you want to really maximize chain life. (NB: The principle applies to drip lubes as well, it's just that the liquid likely damps the sound.) This could be a lot of work every week to clean the chain. You could mitigate this somewhat by having multiple chains in rotation, but having to clean the chain before re-waxing would still be a burden.

One plausible alternative is to combine hard waxing and drip wax lubes like Squirt, Smoove, Tru Tension Tungsten, Silca Super Secret Chain Lube, Absolute Black's Graphene lube, and probably a few others I haven't heard of. (NB: no product recommendations, I am just listing lubes I recall hearing of and that there's evidence are well-formulated.) You would immersion wax the chain, then top up with a drip lube every few hundred miles. You would then do a full clean and re-immersion waxing at a longer interval, e.g. every thousand miles. Josh Poertner of Silca is a proponent of this technique. His rationale is indeed that it keeps the pot of wax cleaner.

In terms of economics, Molten Speed Wax is significantly cheaper than Silca's wax. If you were using MSW, plain food-grade paraffin, or another good hard wax of similar cost, then you might bias yourself towards cleaning by immersion waxing. If you are using a relatively premium wax like Silca or Absolute Black's hard wax, then you may wish to consider combining with a drip lube and cleaning before waxing. Absolute Black's lube is absurdly costly, so you really want to minimize contamination in the wax pot. In a season where you're doing indoor training only, external contamination should be minimal, so contaminating the wax pot may be of minimal importance. Also, different formulations of wax use different friction modifiers, e.g. MSW uses molybdenum disulfide (MoS2) and PTFE, whereas Silca and Tru Tension use tungsten disulfide (WS2) and unknown other secondary modifiers (but Silca does not contain PTFE), and Absolute Black uses some form of graphene. WS2 is more expensive than MoS2. If you're using a WS2-based hard wax, it may be worth sticking to another WS2-based drip lube.

@Rider_X made a comment asking why not just use heated plain water in the ultrasound cleaner when cleaning a previously waxed chain. Indeed, this is the crux of the matter, and an ultrasonic cleaner isn't even required for this step. For that matter, chain waxing should not require an ultrasonic cleaner at all, nor is an ultrasonic cleaner alone sufficient to guarantee a clean chain. Nonetheless, if the OP used an ultrasonic cleaner with sufficiently heated water, I'd expect the cleaner to extract more contaminants from inside the chain than simply swishing it in water. Again, this would lengthen the service life of the wax. But again, this comes down to a trade-off of convenience for better lifespan for the wax, which is not that expensive considering that it's also extending your chain's lifespan.

As a side note, the OP's stated process neglects a step to remove the solvent. Typical degreasers, including acetone or mineral spirits, will leave a sticky film on the chain. This film will inhibit the wax's adhesion to the chain, which will increase drivetrain wear. The typical recommendation is to shake the chain in a bottle of denatured alcohol to remove the degreaser film. I would argue that if the OP must solvent clean their chain, then the alcohol bath is also required. I am not certain if the degreaser film will contaminate the wax itself.

Not the answer you're looking for? Browse other questions tagged chain cleaning wax or ask your own question.

11
Is a self cleaning lube enough for chain maintenance?
4
Is "Greased Lightning" safe to use for bicycle cleaning?
5
Using WD40 for cleaning (not lubricating..)
2
Are there any suitable alternatives to alcohol/brake cleaner for cleaning brake rotors?
5
How dirty should the chain and the cogs be before I should consider cleaning them?
2
How many chains before the cassette is replaced?
4
Ultrasonic cleaner power requirements, for cleaning chains before waxing
2
Wax lubricant - what components need wax applied to them, and what is the recommended re-application procedure?
5
Marking chains permanently for later identification