How do sidewinds affect forward speed?

If this is on a perfectly circular course, is the effect of the side wind (I should have said 'the angle of the wind') smoothly proportional? I.e. assuming constant power output, when doing a lap and so experiencing each angle of wind for the same amount of time, would my speed show a smooth trend from 20-X mph, through 20mph, to 20+Y mph, and then back again, maybe like a sine wave? Or do side winds mess with the cyclist in a way that pure head and tailwinds don't?

For extra credit, do you know where the wind would be coming from for me to be travelling at my original speed of 20mph?

The answer to your questions is not straighforward, as shown below.

The easiest to answer is your first question: are X and Y the same? No, they are not. This follows from the formula for the air-drag power Pa = ½.rho.Cd.V.(V-Vw)² , where rho is air density, Cd is drag coefficient, A is frontal area, V is forward speed, Vw is wind speed.

For any V0 and Vw, you can calculate Vt and Vf by solving a cubic equation. It is easy to verify by substitution that for a no-wind speed of 20 mph and a wind speed of 10 mph, the headwind speed becomes 13.95 mph and the tailwind speed 27.16 mph (neglecting rolling resitance). So Y>X.

However, I find it more elucidating to consider a return trip along a road heading straight in the direction of the wind first and returning in a tailwind on the same road. Suppose that the trip without wind takes a time T0. It can be shown that the total time Tw is always larger than T0 and that the ratio Tw/T0 does not depend on A, Cd and rho nor the distance : Tw/T0 = (V0/Vh +V0/Vt)/2.

A few years ago I made a graph where the ratio Tw/T0 is plotted against the wind speed, assuming a wind-free speed of 20 mph, shown below. 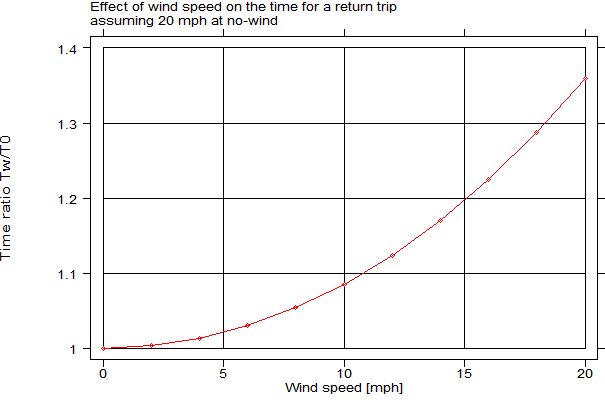 The graph shows that a wind always increases the return time. At 10 mph wind speed the return time increases by 8.5%. At 15 mph wind, the increase is about 20%. This calculation assumes that the rolling resistance is small compared to the aerodynamic resistance, which is roughly the case at 20 mph.

Your question about the effect of a side wind is much more difficult to answer, because the wind-exposed area plays a big role. This takes a much more elaborate study. There is a free-access paper on the internet by Osman Isvan that investigates this question in depth.

For constant input pedaling power, a sidewind will slow a cyclist down.

Unfortunately headwinds have more effect than tailwinds, because aero drag force is proportional to velocity squared.

You can see the difference in force is greater for an increase of velocity than a decrease in velocity of the same amount.

I think this was what I was looking for, just didn't quite know how to search for it: https://www.sheldonbrown.com/brandt/wind.html

The diagrams show that if you have a perpendicular crosswind, if you turn 10-15 degrees so that it is coming from slightly behind you then that is about the same as no wind at all, in terms of energy expended vs speed.

Mathieu van rijswick has already given an excellent overview of the headwind/tailwind situation. I won't repeat that. However, what's missing is a good answer for side winds.

TL;DR: Even a perfectly perpendicular side wind slows you down.

Why? Let's start with a brutal simplification: We model the cyclist as a single vertical cylinder so that they have exactly the same drag coefficient in all directions. Yes, this is an oversimplification, but it serves our purposes.

Now that we have a perfectly rotationally symmetric cyclist, we can easily calculate the effective wind speed v_e that they experience by adding the vectors of the cyclists speed v_c and the wind speed v_w:

At first, this result seems a bit counter-intuitive. However, it becomes more easier to understand when you consider that the side wind increases the amount of air that the cyclist interacts with. And the more air the cyclist needs to accelerate, the more drag they experience.

Not the answer you're looking for? Browse other questions tagged speed wind or ask your own question.

25
How can you speed a road-bike up?
5
What subtle factors affect performance in unsubtle ways?
5
At what slope will the best bikes keep a constant speed?
6
Riding into a headwind faster than my top speed - how is it possible?
3
Spinning bike speed vs outdoor ride speed
11
How to know you have tailwind?
3
Rear view ears at speed
6
How much does wind affect the speed of a professional cycling peloton?
1
How do I increase my average speed?
3
How to estimate the speed of cyclist with given parameters