Is there any reason there are not yet LASER bicycle lights, given some cars already have them?

It makes more sense in bicycles, has they have not a 12V bulky battery like a car, and are more energy efficient than LED lights.

I am speaking about lights which directly illuminate to the front or rear, not things that project a straight line, or a bicycle or a lane on the floor?

The most important part of a vehicle light is the optics because you want a beam with a precise shape and distribution in order to illuminate the road evenly, without wasting light into the sky or blinding people coming in the other direction.

These optics are very difficult and expensive to design. It is easy to make a circular lens which will throw half the light into the sky and blind people coming towards you. A proper beam, which results in even illumination of the road regardless of distance, has to distribute light in a special way which is very un-even: low power at close distances, high power at long distances, a sharp cutoff to avoid blinding other riders, and it has to have the proper pattern in the horizontal direction also: 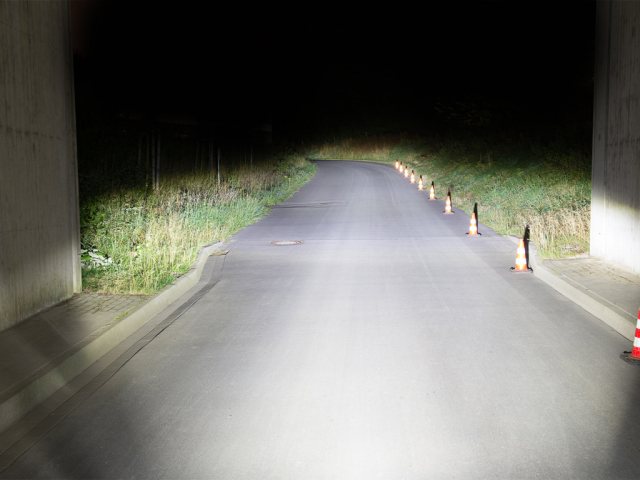 This lamp costs € 189 which is quite expensive. These beam shots tell the rest of story. It is very difficult to do a sharp cutoff without wasting light.

Now, you mention laser lights. The reason these are interesting for car lights is not the efficiency. No-one cares about the efficiency of headlights when the car burns tens of kilowatts just to move. Besides, I found a 160lm/W efficacy figure for laser headlights. LEDs can do that already. The interesting bit is that laser-excited phosphor lights can create a really tiny point source, which is what makes these excellent optics possible.

But do you need that on a bicycle?

If you travel at 250 km/h in a fancy sports car, you'll need a light that illuminates the road very far away, at least several hundred meters. But a bicycle is a bit slower, so most people will be happy with a light that allows them to see, say 50m ahead, maybe 100m going downhill, and that can already be done with LEDs at a much cheaper price than laser.

There is also the fact that an optic that can aim a beam at long distances has to be aimed where the beam needs to be, which means a computer and several precision actuators. Since a bicycle leans in turns there would have to be extra actuators to compensate for that. It gets silly very quick.

Conclusion: even if laser-excited phosphor lights get cheap in the future, their advantage is enabling fancy optics you don't need on a bike, not efficiency. LED efficiency is driven by very strong economic factors (ie, the lighting industry) so LEDs will get more efficient. I don't think you'll get laser bike lights anytime soon.

There is simply no advantage in using a laser over an LED. The only advantage would be that the driver with such a light could feel cool, but that's about it. However, the last point above means that it is very hard to design such a light in a safe way. And that light would still have the downside of the erratic color perception. You only get problems from using a laser for illumination.

I've never seen a laser-based front light for a bike, though I have seen rear lights that use a laser to draw "virtual cycle lane" markings on the ground. 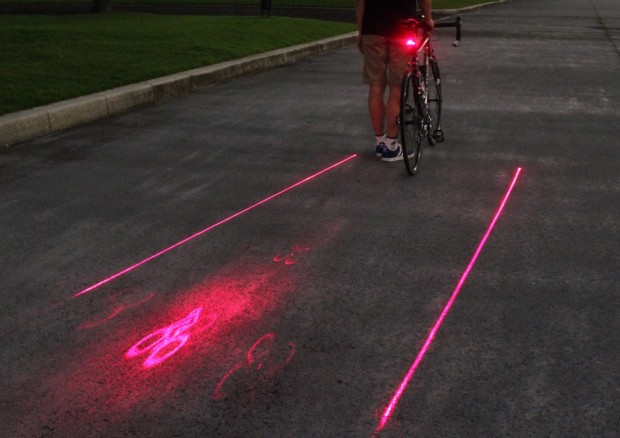 These have conventional red LEDs as their rear-facing illumination, and the laser or lasers are used to draw the line.

Also the example I saw was broken....

These rear lights use either one, two, or three red lasers, but create the line using a scan system like in a photocopier or laser-printer. That's essentially a small mirror on a shaft rotating at speed. The laser's beam is reflected through an arc toward the ground, and stopped by the casing/design at other angles. The line seen is due to persistence-of-vision and is really a dot moving at speed.
Upshot - a bike has far too much vibration to make a high speed motor work reliably for an affordable price.

The bike logo is simply a fresnel (silhouette cutout) and a focusing/keystone lens, possibly with its own laser.

Second, there are no cheap white lasers. While "white lasers" were demonstrated first in 2015, they're created by using a large blue, and a smaller red and smaller green laser. These three beams have to be focused and combined to form "white" light.

Downside 1 - its a point, not a broad illumination. If riding, I want to see a cone around my path, I don't want to spotlight things.
Downside 2 - more parts, more power draw, more complexity all add up to more size and more cost.

At this time (Jan 2020), LEDs are affordable, well understood, cheap and robust. You can generally find a workable light for an hour's wage in much of the world.

What need does a laser-based light fulfil that cannot already be done by existing LED tech?

Not a bicycle light, but Wicked Lasers has an add-on called Phosforce to their blue Arctic handheld laser that converts the blue laser light to bright white light. It's a phosphor screen that fluoresces when hit by the blue light, just as the coating on the inside wall of a fluorescent tube produces white light when excited by the ultraviolet photons produced in the gas inside the tube. This is what the BMW lights do as well of course. The Phosforce is listed for $50 and the Artic laser for $200.

There's a video there too.

I don't know if this would be any good as a bicycle light. The light may be designed for a short duration high output: the laser may not be cooled very well and the battery life may not be good. The beam pattern may not work well on a bike either. But these are just my guesses; I don't own one.

I don't know if the claim about higher efficiency than LED is true. LED's are pretty efficient. It's probably just a gadget on those cars, a way to make them seem sexy.

Not the answer you're looking for? Browse other questions tagged lighting headlights led-lights taillight or ask your own question.

7
Where to find a good bicycle-trailer lighting system…in Canada
10
Choosing lights for my bike
2
Bicycle lights- Indicating in the dark
10
Pedal-powered head/tail lights
1
Shimano Hub LED lights working sporadically
4
Dynamo bike lights - unknown short circuit cause
2
Can I get a bright rear light using AA batteries, or is there a compelling reason why nonreplaceable batteries are so widespread?