I have a universal spoke wrench. It used to work on any spokes I've owned, until now.

I have a bike with 2mm spokes. The nipples are between a 13 and 14 on the universal spoke wrench's sizes.

I have been able to find a mapping of gauge to mm/in.

Can anyone please answer with a definitive, trustworthy mapping like this (except correct):

Nipple wrench flat sizes don't correspond to spoke gauge in as clean or universal of a way as you're suggesting.

This depends a little on where you are in the world (and in history), but 2mm aka 14g spokes are by far the most common for bicycles, and there are three different common size nipples associated with them: 0.127", 0.130", and 0.136". (These correspond respectively with the black, green, and red spoke wrenches that several tool companies use.) Of these, the 0.127" wrench flat size is the standard one for 2.0mm spoke nipples by all the modern premium quality spoke makers (DT, Sapim, Wheelsmith, Marwi), and the other two are used seemingly at random by various lower-tier spoke/nipple producers.

So there is no 1:1 mapping, especially because looking back into history there can be found any number of now-unusual permutations. The gauges listed on ring-type spoke wrenches are arbitrary and outmoded in actual use even if once they were based on some kind of real system.

Also, spoke wrenches in shop use get a lot of reps and do develop slop and eventually wear out.

There are spoke wreches which compare many different sizes in one tool. Not that expensive either. They look like this: 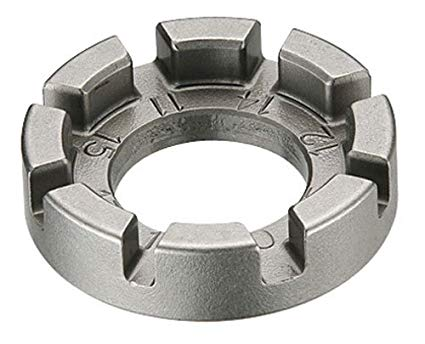 I have two of these and have thus far not come across a size that wasn't on the tool (working on over 30 bikes.)

Not the answer you're looking for? Browse other questions tagged spokes nipples or ask your own question.

5
Does anyone make a clamping spoke wrench?

4
Spoke nipple broke, should I replace more than one?
5
Spoke and nipple compatibility
1
Why are spoke nipples called nipples?
3
Wheel building - ever encountered nipples that are screwdriver-only?
1
Why do spoke nipples keep falling out?
18
How precise do spoke sizes need to be?
5
Does anyone make a clamping spoke wrench?
1
148-to-141 conversion effect on spoke length?
3
Spokes are too long for wheel build. What did I do wrong?
2
How to determine which size spoke wrench I should buy?