I am always having a broken spoke once in every 500Km

I have a Giant Escape hybrid bike, which I bought as a secondhand bicycle. After I had bought it, once in every 500km, according to Strava records, I am always having a broken spoke in rear wheel. Yesterday, I got my sixth broken spoke and I have noticed the old spokes broken always, not the ones I had replaced.

I asked from a few repair persons but they just replaced the spoke without reasoning. Is there anything I can do to stop this? Because I think this is strange. 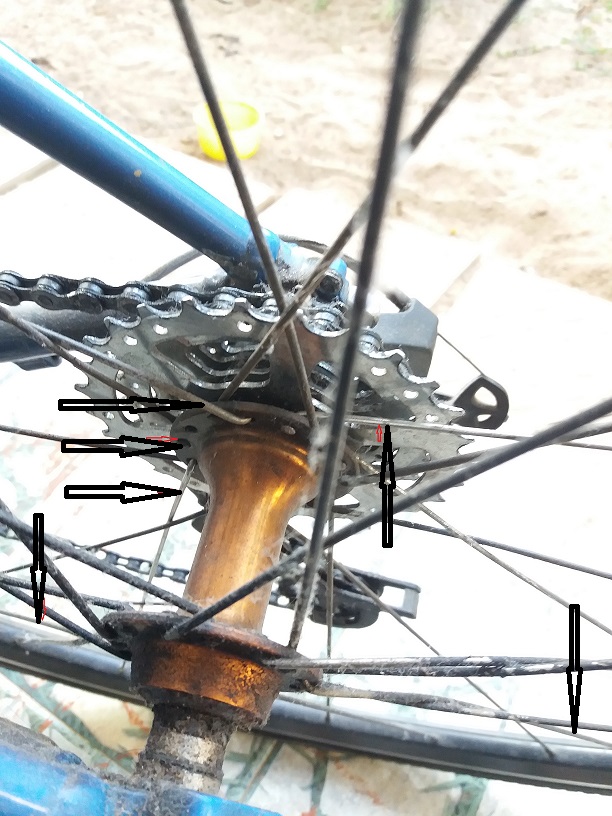 As you can see in this picture most of the broken spokes are on drive side. As I remember I heard sound of breaking when I tried to speed up quickly.

Most of the time the spokes break at the J Bend, not the nipple/rim. They all broke in the rear wheel, none in the front wheel. Most are on the drive side, and few are on the non-drive side.

Check if all spokes are properly tightened. if some spokes are too loose that can put extra stress on the rest of the spokes which can cause premature failure. If so (some of the spokes are not properly tensioned) you should true the wheel (or have it done if you don't feel comfortable doing it yourself).

How old is the bicycle/how old are the wheels? Metal gets 'tired' after a certain number of load cycles ( https://en.wikipedia.org/wiki/Fatigue_(material) ). (If the spokes break when trying to tighten them to a normal level the problem is most likely metal fatigue and you should either replace all spokes or replace the wheel (the latter is a more realistic option)). If the wheel is indeed quite old, the spokes are all properly tensioned and there is no other reason to suspect spoke failure metal fatigue might be the issue, if so (as afore mentioned) either replace all (old still remaining) spokes or replace the wheel (which is more conveneint/also cheaper in most cases). Spokes are quite cheap but rebuilding the wheel will take a considerable amount of time.

Where are the spokes failing (at what point on the spoke do they break, near the nipple, near the j-bent?) Can you add an image of the surface of the spoke at the break point? The type of surface at the failure point can give an indication of the failure mode (if it failed due to fatigue or overloading (putting too much stress on the spoke).

Fatigue usually begins from a stress concentration at the surface. The fatigue cracks grow slowly and usually leaves a striated pattern that looks like a smooth sea shell. Then, when the crack has gone far enough, the object will break suddenly due to the stress in the small remaining area exceeding the ultimate strength. This sudden fracture will usually look different - rough or torn looking. 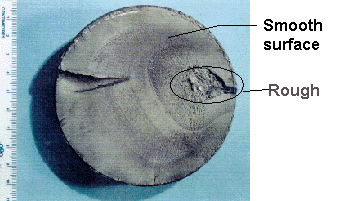 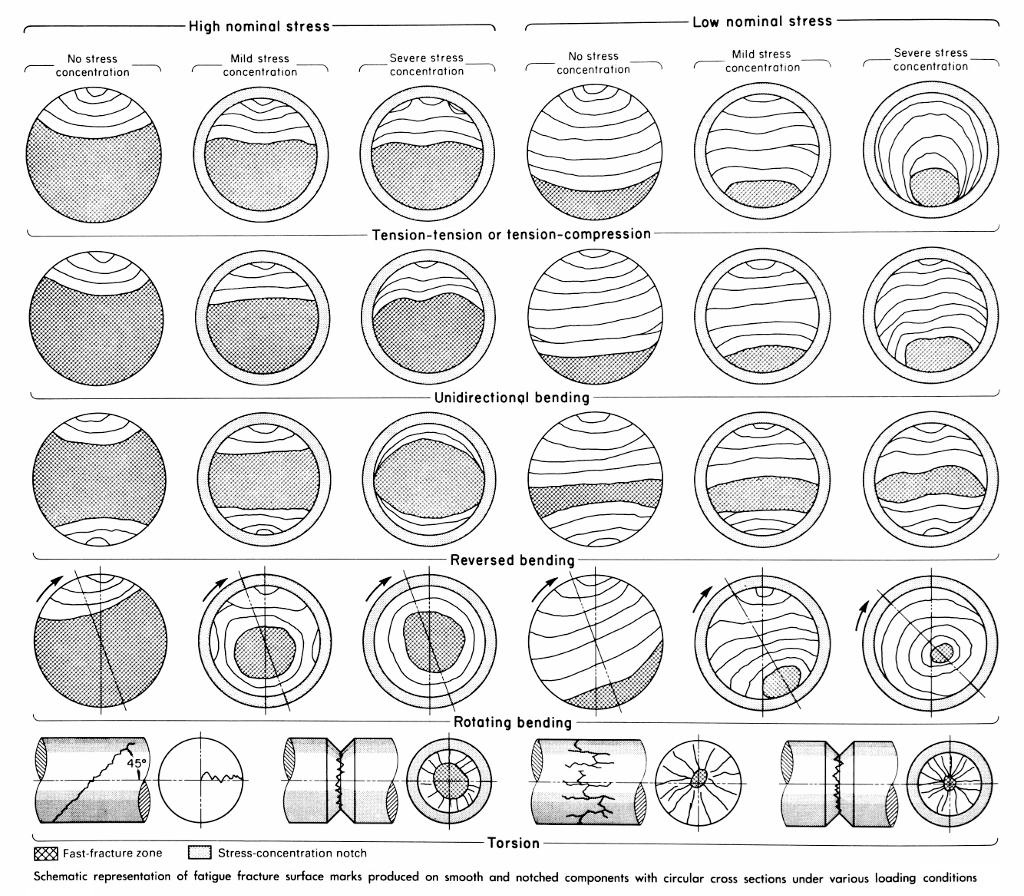 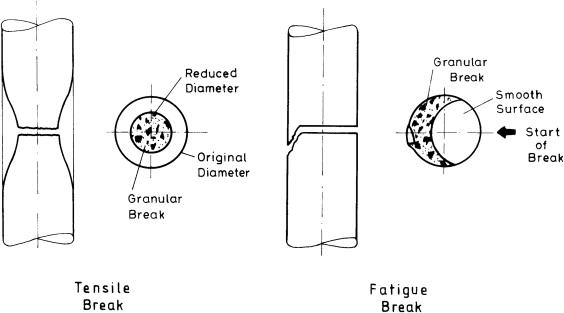 Unless a spoke is damaged by external forces (e.g. chain falling off the largest cog) they usually break because of insufficient or uneven spoke tension. A spoke should always be under tension. When it’s repeatedly unloaded it can rub a teeny tiny bit against the spoke holes in the hub and the accumulated wear usually causes it to break at the bend after some time.

All the pictures of the Giant Escape I can find show entry-level wheels with 32 spokes and normal, double-walled aluminium rims. They should be sufficiently strong for light off-road use, light luggage and a not-too heavy rider (let’s say less than 100kg).

I think your bicycle mechanics are reluctant to replace all spokes because it’s much easier and cheaper to replace a single spoke only. The labour costs of rebuilding a whole wheel are often greater than getting a new, entry-level wheel.

You have a few options:

First, start going to a different bike shop. The one that is putting in one new spoke at a time on that wheel each time you break one isn’t doing you any favors.

Consider having your wheel rebuilt (i.e. all new spokes) by someone who knows what they’re doing or buying a replacement wheel. If you think you’re a little heavy relative to the strength of the wheel (for example, if you have a 20-spoke wheel and you’re 260lbs) just buy a new stronger wheel. A competent bike shop mechanic can guide you here.

I have a Giant road bicycle, a 1999 model. At about the same interval that you describe, I would break a spoke on the drive side of the rear wheel. That side is where the spokes almost always break, because the stress on that side is much higher.

After replacing several spokes, I asked the owner of my LBS why they were breaking. "Cheap spokes from Taiwan," he replied. He said that spokes from Taiwanese manufacturers from that era were prone to breaking. I weigh about 90 kg, which makes the problem worse of course.

The owner of the LBS predicted that once I had replaced all the spokes on the drive side of the rear wheel (with spokes that he sold me), then I would have much less failures. And so it has turned out to be: I broke a few more after I talked to him, but soon afterwards the breaking stopped. I haven't broken a spoke in over two years now.

If the failures happen to be at the bend on the non drive side it's almost certainly metal fatigue arising from insufficient tension. If the fatigue damage to the unbroken spokes hasn't gone too far it MAY be useful to increase tension in all spokes, say 1 nipple turn each. It may already be too late :(

Not the answer you're looking for? Browse other questions tagged spokes rear-wheel giant or ask your own question.

18
Why am I breaking a ridiculous number of spokes?
23
Spokes keep breaking - bad hub or bad build?
9
Is this an abnormal rate of spoke breakage?
3
Replace hub from old cassette to new fixed
0
New wheelset, spokes losing tension
5
Mixing various spoke widths in a single wheel
2
2 broken spokes same side, can I replace with one from the other side?
2
Two spokes broke in 10 days interval on rear wheel, should I worry?
1
Replacing multiple spokes (9/36): more like replacing spokes or rebuilding a wheel?
3
Spokes are too long for wheel build. What did I do wrong?