Recently I've installed a front derailleur and while doing it used nearly all hex screwdrivers from my multitool. For example, on the left hand of the handlebars I have a brake, a shifter and a fork lockout. To unscrew them I have to use 3 different screwdrivers (the one on the grip is the same as on the lockout). Needless to say that to put a cable on the frame I have to use different ones. 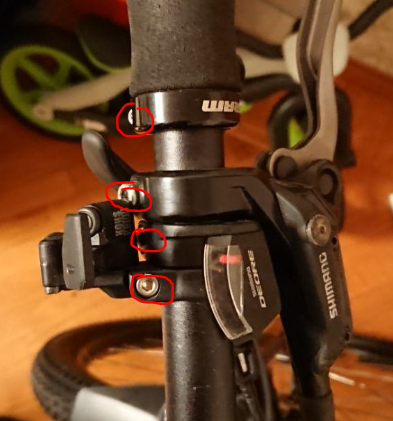 What is the reason for that (except for the multitool manufacturers conspiracy)?

Generally, bigger sizes of screw heads allow higher torque to be applied to them. This is also often expressed in lengths of wrenches used for them in workshops: typically a 3 mm L-shaped hex key is shorter than a 4 mm one, which in turn is shorter than 5 and 6 mm ones etc. Multitools are exceptions because of size constraints of tool bodies; it is typical to see a 8 mm hex head on a multitool with inadequately short leverage.

An unnecessarily big screw would also mean more "dead" space is needed in the parts such screw connect. These parts are collars of brake levers, derailleur shifters, grips etc. "hugging" the handlebar's tube. Collars interfere with each other, preventing you from finding the most comfortable position of e.g. brake lever. By the way, this is why top-level brake/shifter combinations basically use a single collar and are connected together (Ispec, MatchMaker etc.)

Bigger torque is needed to counteract bigger force × leverage applied to a specific component. For handlebar components, forces are produced by user's hands/palms and have the same order of magnitude regardless of which component is being "touched". The applied force being fixed, it is the leverage (in centimeters) that should decide achievable range of user-supplied torque and thus required screw-supplied counter-torque.

1
Do brake hoods come in different sizes?
2
loose brake calipers
1
Slipping shift cable barrel adjusters
2
9sp/10sp compatibility in Shimano SLX drivetrains
2
Reason for handlebar diameter
3
Troubleshooting a new shifter
5
Bike shifts well for low gears OR high gears - but not both
4
What is the name of the hex screw that holds the brake cable
4
How to lower gearing on Tiagra 4700
2
Easily misaligned handlebars when using stem raiser