My bike frame is a Wilier Imperiale with Campagnolo crankset. I am changing the crank to a Shimano 6800. The bottom bracket does not fit to the Shimano one. It is old version WILIER OVERSIZE BOTTOM BRACKET. I searched it but someone says it is BB94 while someone says it is BB90. I am quite confused about the real specification of the bearing cups. Now I don't even know what key words I should use to search the replacement item to buy. Thanks.

You stated that your frame is a Wilier Imperiale. I'm not certain what year this applies to, but it is very likely to have a proprietary bottom bracket standard known as the BB94 or BB93 standard. Per the Cyclingtips link:

Wilier designed its BB94 (later re-named BB93) around Campagolo’s Ultra-Torque cranks. Seats for the bearings were moulded into the frame à la BB90 so there was no longer a need to install cups. Wilier was able to provide two bearings sets, one to suit Shimano’s Hollowtech II cranks, and another for SRAM’s GXP axle, that could be pressed into the seats so that those cranks could be installed. This design was subsequently replaced by BB386EVO.

As you may know, many modern carbon frames have press-fit bottom brackets. With threaded BBs, you would buy the bottom bracket as a unit. That unit has both the cups (metal cups that are threaded, and you screw those into the frame), and the appropriate cartridge bearings are pre-installed into the cups. With press-fit BBs, the cups aren't threaded, they may be made of plastic, and you press them into the frame, but the cups also contain bearings.

Why your crank doesn't fit and what bearings you need

The reason you can't just slot your Shimano crankset into the Wilier is this: Campagnolo Power- and Ultra-Torque cranksets have 25mm diameter spindles, and the bearings have an internal diameter of 25mm. Shimano Hollowtech II cranks have 24mm spindles, and fit too loose in the bearings. Also, SRAM GXP cranksets have 24/22mm spindles. Wheels Manufacturing sells a number of replacement bearings. All you need to do is to select the ones with internal diameters of 24mm. A side note: don't get a crank with a 30mm spindle, as your frame appears to be incompatible.

This isn't a recommendation to use Wheels specifically. Other manufacturers like Enduro may also produce replacement bearings. If you wish to source your own bearings, you'd want an outer diameter of 37mm, an internal diameter of 24mm, and a depth of 7mm. I believe this corresponds to a 2437 bearing. (A previous version wrongly stated that this is a 6805 bearing; that bearing has an internal diameter of 25mm and will accommodate Campagnolo cranks.)

Is it a good idea to seat bearings directly in the frame, rather than in cups?

From what I've read, I don't think it's a good idea to seat the bearings against a carbon surface. Kogel, a manufacturer of bottom brackets and pulleys with ceramic bearings, contends that

Another problem that I have seen is that the BB shell ovalizes over time from repeated compression of the carbon under pedaling forces. Trek’s solution for either problem is to send out a custom sized ‘V2’ bearing, which is a slightly larger version of the 6805 size that should have fit initially.

BBinfinite, which also makes bottom brackets, seems to agree with this, but they think that the issue occurs when the bearing is not installed tightly. If it develops movement, it will gradually enlarge the BB shell by fretting against it. The bearing will thus fit loosely in the shell, and it will creak. BBinfinite advocates applying loctite to the bearings, which stops them from moving. This Slowtwitch thread, contains a report of the BB shell becoming out of spec, likely due to the phenomenon described above.

In most other press fit arrangements, the shell is at least protected from wear like this by the BB cups (which can be plastic or metal). In addition, the Wilier in question may have had an aluminum tube bonded into the frame to serve as the bearing seat (see comment by Robert). That said, even regular press fit systems are notorious for creaking problems. We could revert to threaded BB shells, and Trek appears to be replacing BB90 with the T47 oversized threaded system (note, their 2020 model year Emonda and Madone frames appear to still use BB90, but the Domane and Crocket bikes switched). However, this involves bonding an alloy shell into the carbon bottom bracket. This process can also be imperfect, e.g. the shell might not be bonded properly. It does add weight as well, but the amount of weight actually in play is of little consequence (and it can be safely offset by light parts in other areas, if you must play the weight weenie game).

One original Wilier owner on Slowtwitch.com reported that they received a bag of hardware with their Wilier. This bag may have contained bearings for the bottom bracket. If you have this bag, it might be worth checking it for the Shimano bearings.

Do recall that you can service your bearings without replacing them. This involves gently prying the seals off, flushing the interior with WD 40, and then re-greasing the bearings. I'd probably recommend this, in fact. It's cheaper than replacing the bearings, and it avoids wearing out the carbon when you press out the old bearings and press new ones in.

Trek does sell BB90 bearings whose outer diameter is oversized by 0.1mm as a fix if the shell becomes slightly enlarged. In principle, if this ever happens to your frame, I believe you could use those bearings. Trek's BB90 specifies a 37mm internal diameter. The dimensions of the BB90 bearings that Wheels Mfg. lists for the BB90 seem identical to the ones listed for Wilier's BB94. The BB90 shell is a couple mm narrower than the BB94 shell, but this appears not to affect the bearing dimensions. If you suspect this, you should measure the diameter of the bearing seats with a pair of calipers in several places to make very sure that they conform to the specified 37.1mm diameter of this oversized bearing.

You will need two 6805RS bearings (likely already in your frame if you had campag on) and two plastic sleeves that reduce the inner diameter of the bearing from 25mm to 24mm outer diameter of the Shimano crank spindle. Campag crankset doesn't seem to use sleeves. Shimano uses two.

In case that PDF link goes broken, here's the screenshot that shows what part you need for each system 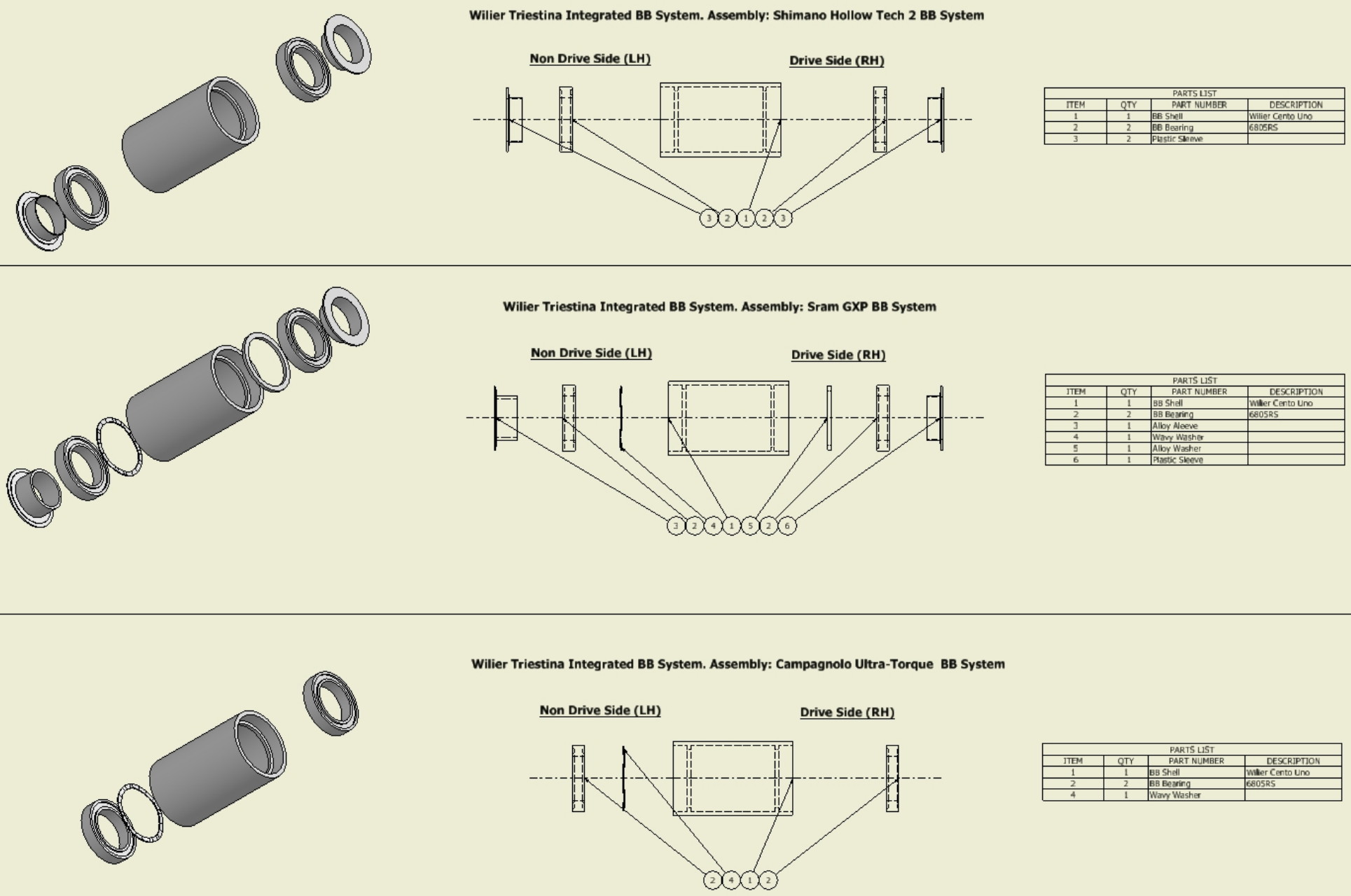 I've used the same info when fitting Ultegra 6700 to my Cento1. I got plastic sleeves at the local Wilier reseller/service. They're dirt cheap.

I believe I mistook mixing English words PLASTIC SLEEVE, DUST CAP, SPACER and SEAL into one thing so make my words hard to be understood.  I have installed the Ultegra crank but I am not sure whether it is the best way. I am now trying to explain what I was facing and my solution as best as I can. (sigh, language is a big issue)

Not the answer you're looking for? Browse other questions tagged shimano crankset bottom-bracket bearings or ask your own question.

10
Is it a good idea to buy second hand bike model that has been discontinued?
2
How to fit BB bearings to install Ultegra Crank on road bike Wilier Cento 1