Wheel Building - Should key spoke be inside or outside flange?

I’m working on my first wheel build and reading a lot of articles about spoke patterns. Some articles say the key spoke (drive-side, to the right of the valve) should be on the outside of the flange, but others say inside of the flange.

In my current build my key spoke is on the outside of the flange. The parallel spoke on the other side of the valve is inside the left flange.

Here’s my finished wheels showing the lacing pattern. I followed Shimano’s recommended pattern but would love to know if it looks in/correct to anyone. In both pics, the wheels are drive-side up, with the valve at the top-center (in the T of WTB). All spokes on drive-side go to holes on drive-side of rim, same for non-drive side. 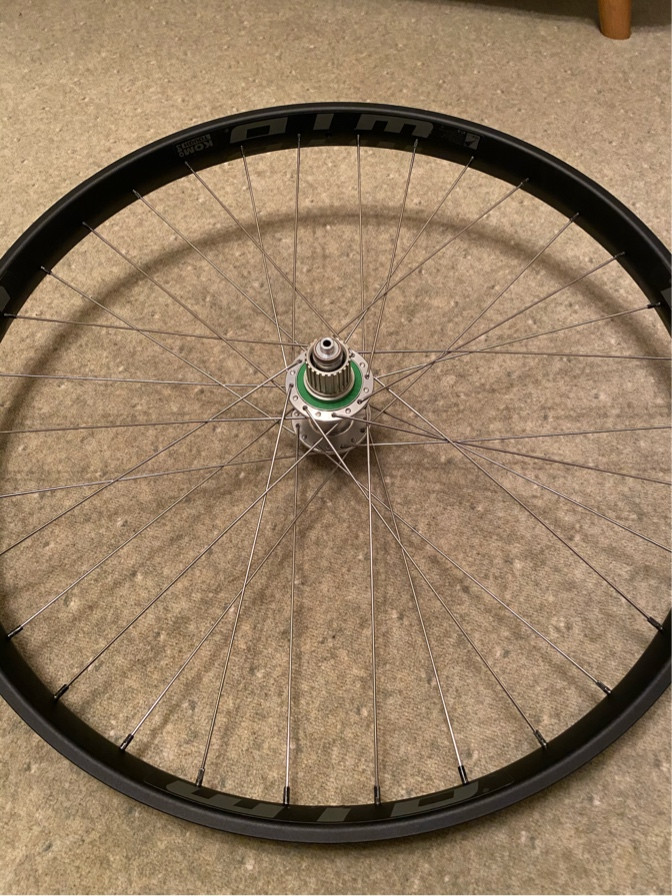 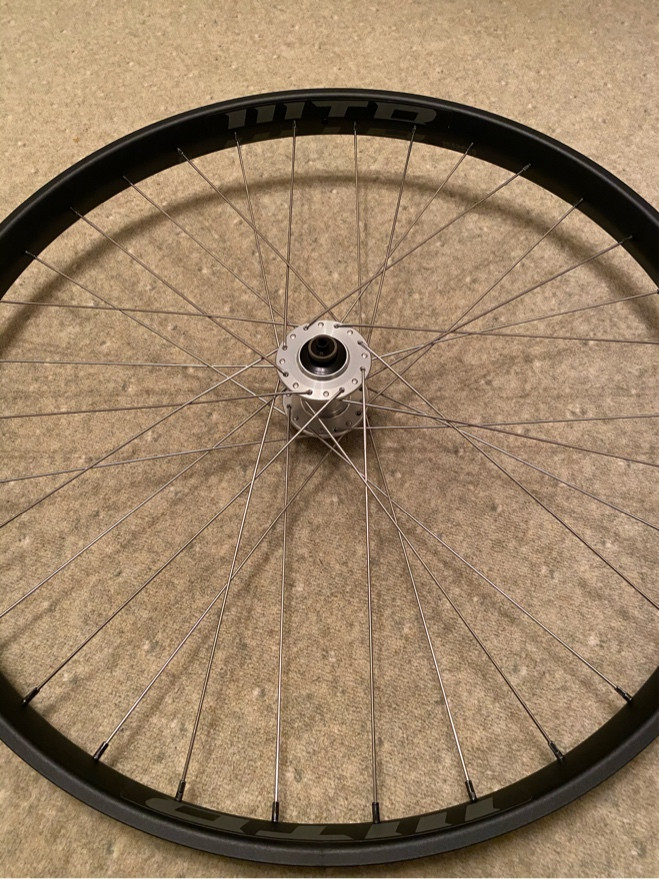 For the pulling spokes, the knee should be at the outside of the hub flange (i.e. spoke heads inward).

If you look at the wear marks of a used hub (picture below ; pulling direction clockwise) you see that the pulling spokes leave a strong impression on the hub flange. Such marks are absent on the inside. The knee of a spoke is the most vulnerable spot. With the pulling spokes running tangential on the outside of the hub the load on the knee is shifted to the line of contact of the spoke with the hub. Also the dish (see https://en.wikipedia.org/wiki/Bicycle_wheel#Dish) is larger when the pulling spokes run outside, which increases lateral stability.

In building a wheel and making final adjustments in spoke tension, you often have to add or reduce a small amout of tension on each spoke. It is difficult to avoid a torsional wind-up because the nipple doesn't rotate freely. There are many craft practises to reduce and release this wind-up, but often they leave some residual tension. If the pulling spokes are running inside the hub, the wind-up tension is mostly concentrated on the knee of the spoke. If the pulling spoke is outside the hub, the wind-up tension is more distributed between the nipple and the hub.

For disc-brake wheels, the spokes on the disc side running forward share most of the braking force. So they also should be mounted with the spoke heads inward. 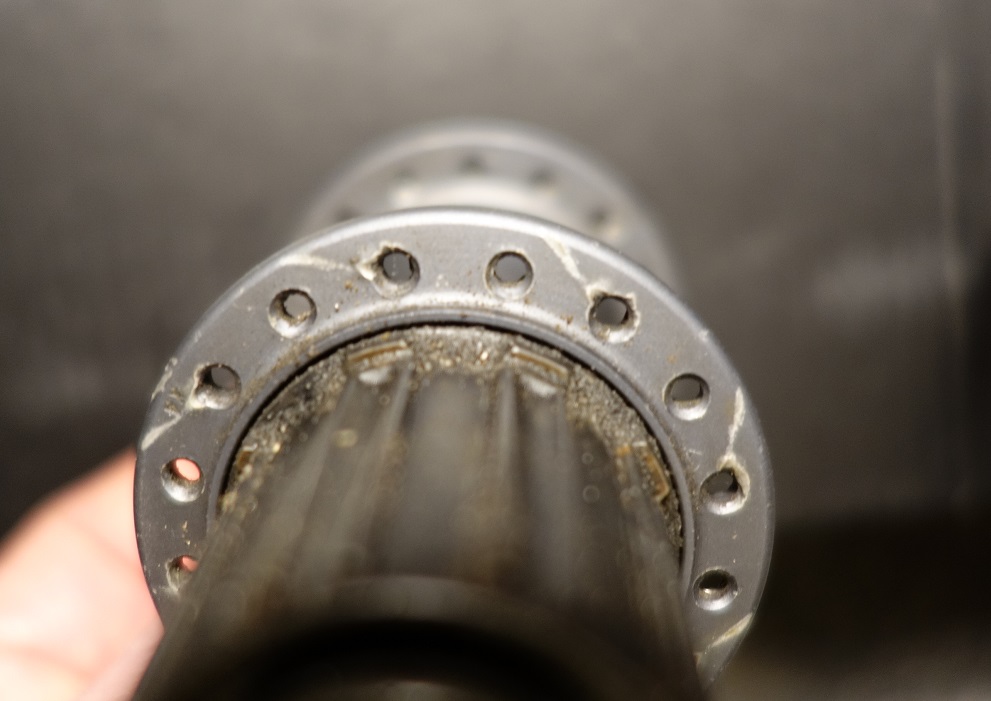 In the end I discovered and followed Shimano's recommended lacing pattern for the front and rear wheels. If I understand the terminology correctly, this means the front is symmetric, and the rear is asymmetric.

There are two ways you can think about this.

If building wheels according to the bible, the first spoke to be installed will be a right side spoke. It's easiest to make it be an inside spoke. For rim brake front wheels it doesn't matter. For disc brake front wheels it will be a pushing spoke for braking loads so making it an inside spoke is optimal. For rear wheels, it will be a pulling spoke on pedaling loads so strictly speaking it should perhaps be an outside spoke according to Shimano's way.

However, a lot of wheels have been built according to those instructions by Sheldon Brown. Such wheels don't have a high failure rate despite the fact that the rear wheels don't have the spokes that will be pulling spokes for pedaling loads optimally oriented.

So, whether you follow Shimano or Sheldon Brown, the front wheel will be the same anyway. For rear wheels, Shimano vs Sheldon Brown disagree on the right side spokes -- Sheldon Brown is easier to implement but Shimano might have a slightly better durability especially if you are one of those who thinks it's a good idea to purchase a 85 Nm mid-drive e-bike, put a 20-tooth chainring and a cassette with a 51-tooth sprocket, put as much load on the bicycle as you can and pull a trailer with heavy stones in it, and repeatedly accelerate up the steepest hill you can find, pedaling standing with the highest assist level.

simple question. pulling the spokes, outside. Nowadays bikes more or less come stock like this though lots of people disagree.

I don't think it makes much difference, but I usually build with the pulling spokes heads out. With disc wheels, braking forces are probably greater than pedalling forces (and of course the front hub sees torque that isn't there with a rim brake) so you should build them the opposite way than you do for rim brakes, if you think it should make much difference. Or you can build one way on the drive side and the other way on the brake side - I used to see lots of cheap factory wheels like that. How about crossed on the brake side and radial on the other side for a front wheel? (Which of course starts the debate "radial spokes - heads in or out?" Heads out for me, from an aesthetic viewpoint, heads in for a laterally stiffer wheel, however the customer wants it, but I just don't like radial wheels anyway.)

Not the answer you're looking for? Browse other questions tagged wheels spokes wheel-building or ask your own question.

4
Can I lace my hub with all inward or outward facing spoke heads?
2
3 cross pattern what's the right way?

22
Is it really necessary to physically cross (interlace) the spokes on traditional wheel lacing?
3
Oil/Anti-seize on outside of nipple when building a wheel?
4
lacing Alfine wheel, trailing spokes inside or outside hub flange
7
What tolerances should I use for spoke tension when building a wheel
3
Why is it important to keep equal number of turns when building a wheel?
0
Different tension on one spoke
4
Rim dish and flange angle problem
3
Can the HED Tomcat wheels be made stronger?
4
How to avoid damaging spoke nipples when wheel building
1
Trying to understand the impact of different tensions between inner and outer spokes