I have a 2008 Trek 4300 MTB (v-brake version) and am looking to replace the RST 100mm suspension fork with a rigid fork, but am having trouble finding something suitable. I measured the fork length to be roughly 19 3/8" (~492mm). All the rigid forks I've found (Surly 1x1, Sunlite) seem to not quite have the a long enough fork length. I'm hoping someone here might have a suggestions. Thanks. 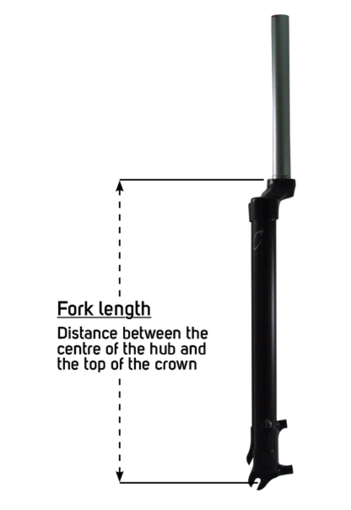 That is a very big axle to crown number for a 100mm 26" fork. 490s for 26" is more associated with dirt jump/downhill/etc, hence the lack of options you're finding for a mass produced rigid conversion fork. What you'd want if you could get it is something around 465-470mm, which represents what the front end ride height would be with around a quarter of the travel used up statically, which is kind of the baseline rule of thumb that manufacturers go by to figure out what the axle-to-crown is going to be on their rigid conversion forks. Most 100mm 26" forks, say an F100 or Reba, were in the 470-475 range, so most of the rigid conversion forks for that sort of bike are around 445-455. It's all a game of approximations.

There were a few rigid suspension corrected canti post forks in that era that were kind of in the dirt jump/"BigMX" genre, with long, heavy, non-tapered chromoly legs. There was a Redline one in particular I'm thinking about that I'm unable to find numbers on currently, but I wouldn't be surprised if it was longer than everything else. It was very long and heavy.

If you can find a 1x1 canti fork, at 453mm they're on the longer end of what exists for this. That plus a 10mm extender headset lower gets you about where you'd want to be - maybe a little shy if the bike really is designed around a 492mm fork, but it really shouldn't be a big deal riding. Even without the extender it would still be perfectly rideable, but the rider position change would probably come into play more.

I replaced the suspension fork on my old mountain bike with a shorter rigid fork, about 25 mm shorter from axle to crown. It noticeably changed the steering geometry. The on-center stability is reduced, making it easier to turn. The quick steering and reduced weight make the bike feel more agile.

It also lowered the bottom bracket, maybe 10 mm. I sometimes hit the ground with the pedals when leaning in a turn. Then I switched to shorter crank arms to prevent that.

Take a look at Somafab. I believe it is a threadless fork, and they have a pretty good selection.

Probably the CRMO MTB 26″ DISC FORK. You could contact them about exact measurements to see if the geometry is compatible. I used a True Temper steel fork as a replacement for a 10 year old carbon fork and the quality is very high. This was on a road bike. I don't have experience with the MTB fork specifically.

Not the answer you're looking for? Browse other questions tagged mountain-bike fork conversion or ask your own question.

13
Replacing suspension with a solid fork
2
Suspension fork swap for rigid: axle-to-crown confusion
1
How much steerer tube length do I need on my suspension fork
3
Uncut steerer tubes too short for 21" Frames
3
How to adjust RST fork travel?
0
Would longer axle to crown be ok?
2
What do I need to make this new fork aesthetically pleasing?