Why are rear wheels dished?

Suppose on the drive side, the spoke flange is offset 20mm from the hub centerline, but on the left, the flange is offset 40mm. Obviously, 20mm of offset is sufficient offset for the drive side, in order to impart sufficient strength and stiffness to the wheel. In fact, I postulate that the larger offset of the non drive side is unable to add additional stiffness vs. the 20mm offset of the drive side because the wheel must be in equilibrium. Any additional offset of the non drive side must be compensated for by looser spoke tension, anyway, giving no benefit. So why not just make it 20mm on both sides, and reap the benefits of a shorter, stiffer axle?

It cannot be true that dish provides a laterally or vertically stiffer wheel. The wheel must be in equilibrium, so the stiffness of a dished wheel should be the same as a wheel where both flanges were simply the same distance from centerline as the drive side. In other words, the drive side is the limiting factor. The only advantage I can see to dishing is that the lower spoke tension on the non drive side might allow thinner (but longer!) spokes and thinner hub flange, saving weight. But this seems unlikely to compensate for the weight savings that could be had with a shorter axle.

Another possible reason is an aesthetic desire for a laterally symmetrical frame dropout spacing. But in a world of Lefty forks, is this really a barrier?

I thought of this after seeing a heavy duty touring bike with an un-dished rear wheel.

The Bicycle Wheel by Jobst Brandt touches on this: 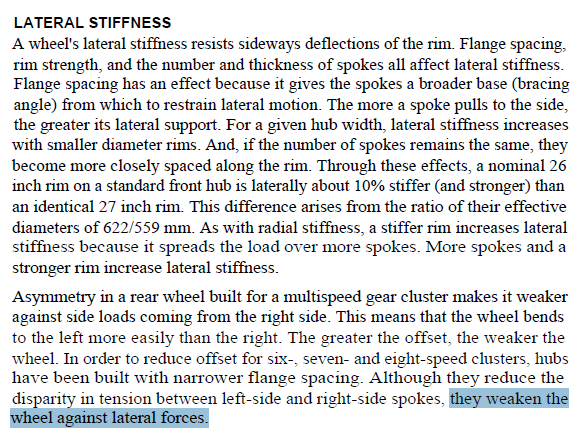 Some rear hubs that have done a version of this include the Ritchey Zero or Z-hubs. The road Zero hub had a 21.3mm center-to-right flange measurement and 28.6 center-to-left, so combined with a 3.65mm or so offset rim it was dishless. (It didn't need an asymmetrical frame, but moving in the left dropout is secondary to whether this sort of idea can work.) These wheels do function and didn't seem to have any grievous reliability problems, so maybe they should have been copied more, but they also don't push the concept all the way to total symmetry.

I believe the deal with this is that there are some physical reasons why if you take the center-to-right flange measurement off a road hub and say, "Okay, if that's strong enough for lateral loads in one direction, then let's make the left one the same," you wind up with a wheel that buckles easily from lateral loads in either direction. In other words it's not just a matter of what bracing angle is good enough per side; in the highly tension-disparate wheels we have, the better bracing angle side is somehow making the whole thing more stable.

I haven't done the deflection tests that would be needed to test whether this is true, but what I have done is build a number of SP generator hubs with their dainty 23.5mm per side center-to-flange dimensions. Those wheels have the unlovely trait that when you do routine side-loading on them to reduce spoke windup, you can feel that they're extremely laterally flexible, and it's easy to induce a "column buckling" type failure if you're not careful, something I have no trouble with in other wheels. People ride them and they work, but from what I've experienced it's clear to me that once you're down to bracing angle numbers like that on each side, the wheel threatens to become too unstable.

Another piece of the puzzle is that, as with so many aspects of bike component design, competitive and sport use is the economic backbone of the industry and so what works there drives what gets made. How it applies here is that existent rear road wheels have been strong enough for competitive use under athletic riders, so doing anything about their lack of strength from being so heavily dished has never been seen as a priority by the mainstream, or worth compromising anything else to fix. Virtually no advantage is ascribed to increasing the strength of the wheel against vertical loads, so why sacrifice any lateral strength to get it, even if it were just in one direction? Were this not the case, offset rims would be ubiquitous, because they work against the problem in a manner that gives up nothing other than some additional costs (and have become common on prefab sets).

The main point is probably history:

When chain-driven bikes were invented, they were single speed, only. The rear triangle was symmetric just as the rear wheels were, as the single sprocket didn't take up much space and could fit easily into the gap between the frame and the spokes.

Then people realized that it would be good to have a number of different gears, and added two more sprockets and a derailleur to the bikes. This was pretty much an after-thought. It did not change the existing parts, it just added parts.

However, as more and more gear were demanded by customers, there was simply not enough space to squeeze the required sprockets in between the frame and an undished rear wheel. So, in order to keep compatibility with existing frames, the rear wheel had to be dished.

That said, there is a second point, the chain-line:

If you were to construct an 11 speed bike with an undished wheel, you'd either end up with a very thin wheel (unstable!) or you'd have to move the right dropout significantly to the right. Your chain rings would need to follow.

This would mean that you either loose space for the crank arms and move the chain dangerously close to the pants, or that you would need to move the pedals outwards. The later would feel quite awkward to most cyclists, and would make cornering much more dangerous (pedal strike).

I'm not saying that you can't do this, but the result would not look and feel like the bikes we ride today.

This is where your thinking is going wrong. The emphasized sentence in the quote above is false. You are confusing spoke tension with the ability to withstand a lateral force.

And the restoring forces in case of deflection are also expected to be the same from both sides, regardless if flange spacing differs

Again, that's false. You are assuming the reaction force in response to a rim deflection is only determined by the balanced lateral force the drive and non-drive side spokes exert on the rim.

What you need to think about is how the forces exerted by the spokes changes as the rim is deflected. The greater the angle the spoke has to the plane of the wheel the more it will elongate for a given rim defection away from it. That means the rate of increase in force as the rim deflects is greater for a larger spoke angle. That's why the non-drive side spoke can exert a higher force in response to rim deflection despite its static tension being lower than the drive side.

Good question. The only reason I can think of is that the average spoke tension of a narrow symmetric rear wheel (i.e. same spoke angle on both sides) would be higher. Wouldn’t this increase the compression force on the cross-section of the rim?

In recent years some asymmetric rear rims have been released which improve the drive side spoke angle a bit (e.g. DT Swiss RR411) and allow for higher non-drive side spoke tension.

3
Replace hub from old cassette to new fixed
4
Rim dish and flange angle problem
3
Any tricks to disassembling an Easton R4 rear hub?
3
Tightening straight spokes
2
Which spokes go on the non drive side and which go drive side?
2
Wheel Building - Should key spoke be inside or outside flange?
3
Why would non-drive side leading spokes break?
3
Spokes are too long for wheel build. What did I do wrong?
8
Why is my wheel going out of true after I mount and inflate the tire?
1
Wheelbuilding a rim with offset holes - how to lace?