My girlfriend would like to take up road cycling and join me, but hasn't had a road bike before me. So, I'm gleefully eyeing up an excuse to go bike shopping :-)

I'm used to the idea that road bikes are also offered in 'women-specific' frames - not as in the old style with the lower crossbar, but a different geometry to an otherwise standard two triangle frame. When reading up, it seems this can be significantly a smaller frame - which wouldn't be an obvious benefit for her, because we're both 5'9 give or take and fairly similarly proportioned.

I know why women-specific saddles are a thing, but they're an easy swap at a friendly bike shop. Is there any other reason why a 'mens' frame wouldn't be perfectly good for her?

The term you may be looking for is "unisex" bike - although you're right that if a bike manufacturer is lazy, "unisex" will basically mean made for men.

One major element of bike fit is the position of the handlebars. Basically, you want to select the frame that will enable you to put your handlebars in a comfortable position where you can generate enough power. The image below from road.cc depicts frame stack (how tall the front end is) and reach (how long the bike is). Frame stack and reach influence where you can put the handlebars. Riders can further modify their handlebar position by putting spacers under the stem, and by selecting stem length. Secondarily, they can select handlebars that have a different amount of reach and drop as well. 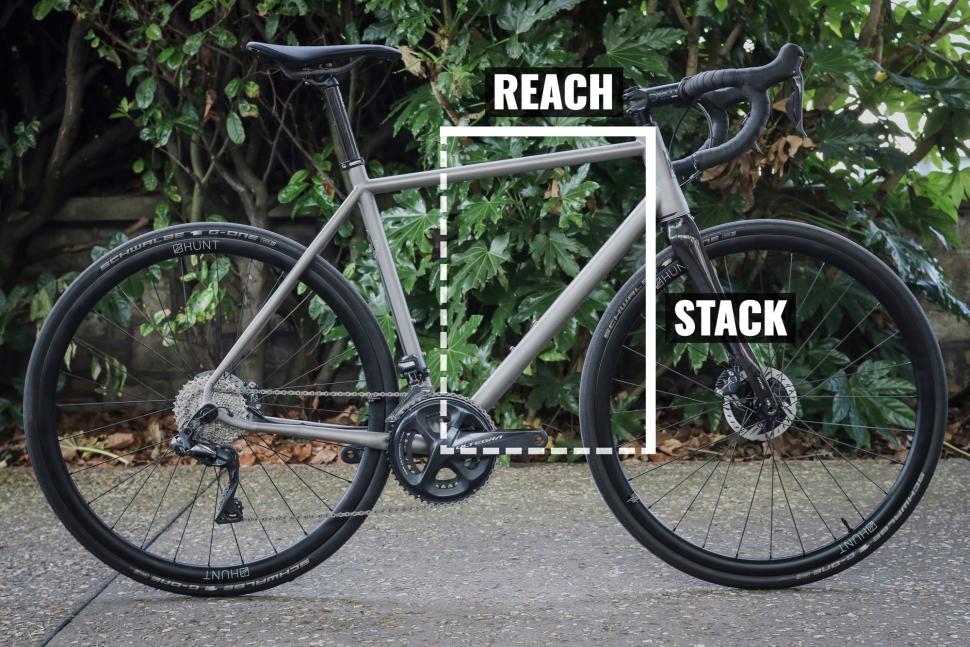 Now, all humans have different ratios of leg length to torso length. Two of us linked previous answers about WSD bikes in the comments. Some of those answers showed that controlling for height, the average woman may have longer legs and a shorter torso than the average man. That's based on (I believe) some anthropometric data gathered by the US Army (see my answer in the Q&A I linked). If that assumption is true, a WSD bike is slightly more likely to fit your girlfriend than a unisex bike. Based on her personal preferences, there are other aspects of WSD design that may appeal to her more; e.g. a less aggressive position, different tubing to accommodate relatively lighter female riders, pastel colors. Some of these are substantive changes, and some are not - in fact, "shrink it and pink it" describes the a superficial approach to design for women that some bike companies have used; it very likely under-served competitive female athletes.

Some other companies dispute the paradigm above. They feel that they can meet the needs of both female and male riders with unisex sizing, although they change the bike's contact points (different saddle, narrower handlebars) for female riders.

In both design paradigms, it's important to offer small sizes to accommodate women. When I first got into road cycling in 2001, I got a 48cm Specialized Allez. I believe this was the smallest size of that bike at the time, and it was a unisex design. I'm a 5' 5" with a relatively long torso. If I had a short torso, that bike may not have fit well. If I were shorter and I had a short torso, I would have needed a smaller bike, and I believe there were very few bikes smaller than that. This cut off a lot of women (and some men!) from easy access to good bikes.

To your question, bike fit depends on your girlfriend's leg and torso length. At 5'9", she's well within the range of heights served by unisex bikes. Actually, she might be at the upper end of the height ranges served by some companies using the traditional WSD paradigm. There's no intrinsic reason a unisex bike can't fit her, unless she has unusually long legs, an unusually long torso, or some other unusual attribute (just spitballing, but maybe unusually short or long arms). Even if it's true that the average women has longer legs than the average man of the same height, there will be many women who have long torsos and many men who have short torsos. It all depends on the individual.

Not the answer you're looking for? Browse other questions tagged road-bike women-specific or ask your own question.

32
What are the differences between men's and women's bike frames?
23
Why are male and female model bicycles different in the between-legs part?
3
Is this bike suitable for a male