Bearings vs. bushings in rear derailleur jockey wheels - which should be more resistant to contamination?

This question came up in a forum I frequent. As background, many of us are familiar with ball bearings, as they are used in many places on bikes: the bottom bracket, the hubs, the headset, etc. Not all of us may be familiar with bushings, which look like this image from the Wikipedia link: 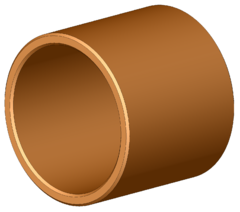 Basically you just put an axle through there. The axle rotates against the bushing. Bushings may not be as frequently used on bikes, but they are often part of MTB suspension components, and they may be used in your rear derailleur. Bronze has been used for bushings in other applications, but on bikes, plastic bushings appear to be more common.

This test by Ceramic Speed showed that some rear derailleur pulleys (aka jockey wheels) rotate on bushings, and some rotate on ball bearings. In particular, they showed that for Shimano's 105 rear derailleurs, both pulley wheels use bushings. In Ultegra, one wheel uses a bushing and the other uses a bearing. In Dura Ace, both wheels use bearings. And Ceramic Speed measured about half a watt of friction savings going from 105 to Ultegra, and the same from Ultegra to Dura Ace. So, perhaps bearings have lower friction when not contaminated.

However, some of the posters in the thread said that in their experience, bearings wore out faster, or they could seize in a muddy race.

The question is: are bushings actually more resistant to contamination than sealed bearings, or do they operate better under contamination than sealed bearings? If true, can anyone explain why this is so? In cycling, this is potentially a big deal if you just regularly commute in bad weather, plus it obviously might be a concern in mountain biking, cyclocross, or gravel.

I'm aware that you can clean both bearing- or bushing-based jockey wheels. However, I have to be frank - I basically just replaced the pulleys when they were worn. I bet many riders do the same. That said, I do intend to pay more attention to cleaning those things out now that I have a gravel bike, and to do so on my road bike also. This post on SE asked about cleaning jockey wheels, and the poster referred to the innards as bearings, but the picture does seem to show a bushing, as indicated by Nathan Knutson.

TLDR: if you are enough of a bike geek to read a post about jockey/pulley wheels, then you probably don't need a summary of five measly paragraphs.

It really depends on the quality of bushing or bearing being used. In the past (i.e., 20 years ago) bushings were much more commonly found in Shimano derailleurs, especially the upper guide pulley. The Ultegra bushing was a ceramic-ceramic bushing and they were tough as nails (sadly newer Ultegra derailleurs now use bearings). You could run them until the grease became dry, wipe them clean, and some new lube and they would run as good as new with no slop or loss of efficiency. While not quite as efficient as a bearing, although not that far off, they also excelled at lateral stiffness ensuring crisp shifts. The guild pulley is what guides the chain to derail from one cog to another and cartridge bearings pulleys will typically have more lateral play and therefore less precise shifting. Roller bearings could be be better here in terms of tolerances to lateral deflection, but I suspect they would fail quickly in the poor conditions they are expected to operate in (i.e., wet and dirty).

Lower end derailleur with bushings typically had metal-metal or metal-plastic bushings in the pulley wheels. Either type of metal bushings were not particularly robust as they could easily get pitted or corroded if they were run in poor conditions without sufficient lube (e.g., winter riding). This would kill their efficiency would mean that you would have to constantly pull them apart all the time and ensure that they always had sufficient grease. That said, if you did this basic maintenance (e.g., every couple months in the winter) they ran fine.

The small cartridge bearings used in pulley wheels have gotten much more reliable over the last two decades and are generally great until they suddenly become crap. While some claim you can do maintenance (i.e., pull the shields and repack) from a practical standpoint they are disposable. The moment you pull the shields you have caused some damage to the seals so that when you re-assemble they won't be as good as they were before. Furthermore, when you start noticing that the cartridge bearings may need this type maintenance they are likely already nearing the end of their lifespan so repacking will only have a short-lived benefit. Trust me I have tried, I have even popped out the cage, removed all the ball bearings, thoroughly cleaned then re-greased and reassembled, to have the bearing begin to fail a short while later.

So this brings us to the main question which is more reliable?

Like so many things in life it depends on how much money you spend! The most reliable are probably the ceramic-ceramic bushing. Ceramic is just so hard that they don't score from contamination, and they don't wear, they just keep going, and are easy to maintain. New cartridge bearings are also very reliable, but become less reliable as they age and the seals start to wear and the lube is used up or becomes contaminated. The quality of the seal impacts the speed of this progression. I have had cheaper bearings fail within a few months of really lousy conditions (e.g., cyclocross), but high quality bearing last for much, much longer, sometimes almost indefinitely until that is when they suddenly start to fail. Finally, metal bushings are really cheap and not particularly reliable unless you are willing to do constant maintenance.

As a mechanic, I've seen umpteen seized cartridge bearing jockey pulleys causing no end of problems. I've yet to encounter a seized jockey pulley running on a bushing, ceramic or metal, that is otherwise undamaged. I have seen cheap metal on plastic bushings become so worn they no longer guide the chain well enough to shift properly but they are very cheap to replace. I would assume ceramic hybrid cartridge bearings would not seize due to corrosion and would provide the longest, smoothest service life but at the highest cost.

For every day commuting, bushings win. High end road or mountain, cartridge bearings for performance but with the caveat of added maintenance.

I've replaced bushings with bearings in derailleurs I've had and noticed improvement. I've had bushings get gunked up and bind or freeze, and have had bearings do the same, but over all when my derailleur is clean, there is less friction and the benefit is noticeable.

Derailleur pulleys, like all other parts of the drive train should be kept clean. I do most of my riding on trails, so gunk is an issue. I occasionally pop the cage off and wipe everything down, spritz with some citrus degreaser, and reassemble, about every fourth or fifth time I pull my chain off to clean it.

I think bushings are cheap and useless. It makes absolutely no sense why any company that manufactures bicycle components would sell me a drive train component with bushings rather than a sealed cartridge bearing.

This is a fun question. I've thought about this quite a bit. This one area that I base my understanding completely on my own experience.

TLDR: I do not believe the claim and I personally think it is the other way round. Sealed ball bearings are more resistant to contamination in my experience.

I would not worry about the watt when they are clean and new. But in practice, I never noticed a problem with my Deore XT RD with sealed ball bearing pulley wheels. Even when I did not take care of the bike enough and the sprockets were very dirty, I never noticed any creaks or friction from the pulleys. However, on my gravel bike with Claris I had to disassemble the pulley wheels often even when I cleaned the bike regularly. It made noticeable friction creaky sounds from the drivetrain. And the pulley wheels did not rotate freely when taken out.

Then I bought alternative sealed ball bearing pulley wheels (cheapest Tacx), removed the original bushing-based ones and the problems are gone so far.