Why aren't winter bicycles camping events common as the motorcycles one?

Here in Europe there is a trend of organizing winter motorcycles rallies in wich the participants go camping in the snow, wearing furs and cooking on camp fires. The first and most important is the Elefantentreffen in Germany, but there are dozens of similar events, and several are still coming to light: as an example, Pinguinos in Spain, Agnellotreffen in Italy and so on. People comes from log distance, often driving for thousands of kilometers in the cold. Part of the thrill is the difficulty of riding in the cold and snow and the necessity of creating strange patchworks on the motorbikes to keep the rider warm or to create motorcycle tyre chains for better grip on the ice. The motorcycle preparation before the event often goes on for months experimenting strange solutions and testing it on the icy roads. 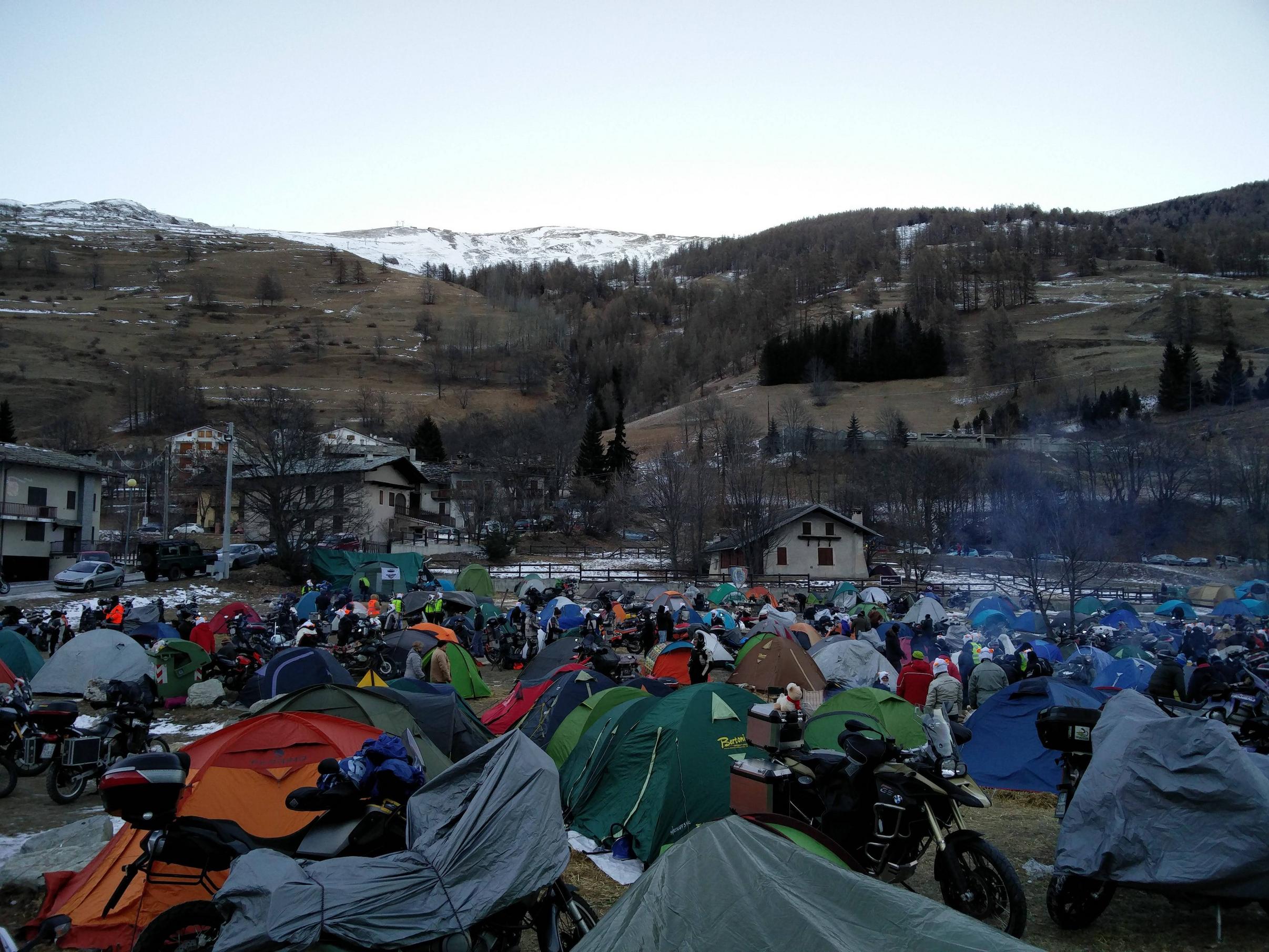 I am a motorcycle and bicycle enthusiast and very often ride in winter. I can say that driving a bicycle in the winter is not only safer, but at least as comfortable as a motorbike, because:

While bicycles camping events are pretty common (an example is BAM, Bicycles Adventure Meeting here in Italy), I'm not aware of one of them that takes place in winter and in snowy places. I think it is pretty strange, as I know several persons that would try something similar.

So, why isn't this format of events available to cyclists while it is for motorbike riders?

I haven't been in an organization that would have considered arranging such event and then decided not to, so this is pure speculation. I have a guess with two reasons: weight and competing activities.

First, winter camping requires much more equipment than summer: heavy sleeping bags, warm clothing, fuel, and taken to extreme a tent with stove. These are not fun to carry on a bike, especially when dealing with snow at the same time. Powered motorcycle lets you put all the effort to maintaining balance and helps with cutting through snow.

Second, if you are camping and traveling under your own power in snow, skis or snow shoes combined with toboggan for carrying your stuff are a better choice. Instead difficult adapting to snow, they have evolved just for snow and allow you go literally off the beaten path. A bicycle would be just trouble.

Third, not directly related to winter, there aren't many cycling events like motorcycle rallies in summer either. Mass events for cycling (or skiing for that matter) tend to be more or less race-like. With motor vehicles these would be very illegal.

25
What type of brakes is least subject to failure in the winter?
16
What needs to be considered when building a winter bike?
4
Stud Tyres - fixing the spikes on new tyres
9
Snow Tire Wraps for Bicycles
8
What to Look for In Gloves for Winter Commuting
2
On which weather conditions should I choose my bicycle with studded/spike tyres?
16
Bike choice for snow commuting
2
Studded tyres on asphalt
13
Why do they not sell bicycles with four wheels?
8
Why are there no snow chains for bicycles?