But for longer tours ( for what I would like to use it too ) would need to mount a rear rack. So the manufacturer does not advice to put on adjustable racks, for example: https://www.amazon.com/dp/B07219CDH7/ref=cm_sw_r_apa_i_BN9EEbNX5G26G

But could it do really harm to an aluminum bike?

It will really depend on how much load you plan on carrying, the type of roads you would be traveling and somewhat your riding style.

I would not recommend the use of that particular rack on a road bike unless it is for little or minimal load on really even roads. Particularly for touring, as damage to the frame would be a trip stopper.

I have used racks that only clip to the seatpost, and also racks with supports for the proper eyelets in the frame.

Seatpost only rear racks are fine for a lunchbox, a few pieces of clothing. Something around 15 pounds (6 Kg.). You can carry a bit more if being really careful while riding over any obstacles, curbs, potholes, etc.

Moderate loads on this type of racks will cause fatigue failures sooner or later, except maybe on the highest quality ones. On low or mid level ones, it's just matter of time. In my case I've had failures on the main rack beam, near the weld to the clamp.

In the case of racks that mount to eyelets near the dropouts, they are the sturdier but the force of impact while hitting a pothole, jumping of sidewalks, etc is pretty direct. In My case I had a cheap rack and the support rods where made from soft aluminum and bent rather quickly. I had to re-make them with rebar. (Mild steel rod about 1/4-inch diameter). With this setup I was able to carry loads heavy enough to lift the front wheel if I unmount the bike without pressing down on the handlebars. I used this bike to commute, for grocery shoping and for delivery service (With a medium sized plastic crate tied to the rack).

The point of this anecdote is to show that the vertical force for a proper rack is rather high. On a bump the supports "see" many times the static load applied to the rack. In the case of a frame with eyelets designed to install a rack, the eyelets are placed on strategic points to transmit the load to adequate points on the frame. For example, near the dropouts (The force is transmitted almost directly to the axle, without applying significative bending force to seatstays or chainstays.)

All of this was done with a mountain bike aluminum frame. They are sturdy enough to cope with that kind of abuse (up to a limit), however, road bikes tend to have minimal thickness wall tubing to reduce weight. They optimize the frames for just the strictly necessary forces, so extreme care must be taken when mounting this kind of accessories.

The rack you have shown uses not vertical but tilted supports, if they are not long enough for the wheel size of the bike, those supports won't be able to reach near the dropouts, and may end upd clamped near the middle of the seatstays, perpendicularly, right where they are most vulnerable. (Imagine trying to break a stick, where do you apply force and in what directions?)

Another concern is that the clamps on the rack may not be the exact shape of the seatstays tubbing, thus will apply a crushing force on them. You risk deforming them and once that happens, they area permanently weakened.

The old time solution for this problem is to use p-clamps and attach a "standard" rack to only the seat stays. 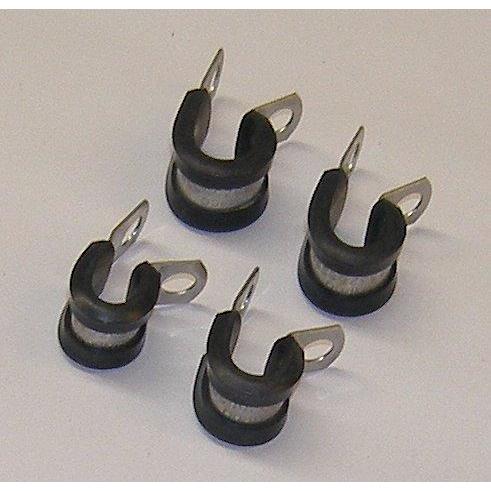 However, they do not inspire a lot of confidence for heavier loads. I think what the manufacturer is objecting to in your example is clamping on a carbon seatpost. If the bike has an aluminum seatpost, I don't see a lot of objections to the rack you posted as long as the loads stay light. No manufacturer is going to say seatpost clamp racks are okay due to the liability issues involved. A poorly designed or installed seatpost clamp rack can be a real problem and the manufacturer has no control over that.

FWIW, there are a lot of solutions these days for bike packing for gravel bikes that don't require a rack and standard panniers. Big seat packs, frame packs and bar bags can hold a lot and distribute the weight and width better for a bike that might see some single track. These bags also have an advantage in rougher terrain, in that their mounting hardware is relatively soft and stretchy nylon. Bumps won't directly transmit the force into spots on the frame tubing that aren't designed to take those kinds of point loads.

If you want some examples of the kinds of bags available, look into Relevate Designs.

The rack you have linked to looks like is functionally a seat post rack with sport stays.

I would replace the carbon seat post with an aluminum one, making sure it is as long as possible to maximize the insertion length into the frame. Use P-clips on the support stays, not clamping too tight.

Not sure what other bags you have or what you mean by 'longer tours' - add a handle bar bag and frame bag and even a small back pack and you need have no need for more than 5kg on the rear rack.

The most likely cause of frame damage is compressing from the P-Clips if they are done up way too tight and are too small, and stress on the seat tube from the seat post. If you are a light rider with good technique over rough ground, this won't be a problem, especially if you maximize insertion length of the seat post. poor technique and minimal seat post insertion length and it won;t matter that you have a rack.

1
best rear rack for fuji absolute bike?
1
Pannier rear rack with no eyelets
4
Can a carbon fiber bike have rack eyelets?
3
Which holes to use for mounting rear rack?
2
Mount mirror to front rack
3
Purpose of fork with single bidon mount and no eyelets?
3
The best way to mount a rear rack
0
Thu axle mount for bike lugage rack
8
Will a rack fit on these rear-facing eyelets?