How does the Pog Security Washer work when using it with the Pinhead wheel locks?

I noticed when I got some Pinhead Wheel Locks that they came with an extra funky looking washer that looks like this: 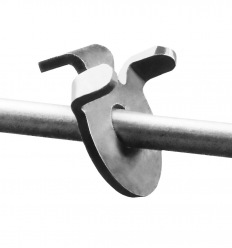 They didn't describe much about it, but I did find some information about them:

I like to keep my bike fully secure from thieves, so I use and recommend the Pinhead wheel locks. I'd like to understand more how they work.

As I was writing the question I realized how they work, so I'll do this Q&A style. The Gator Grip Socket works by forming to the Pinhead lock no matter the lock positions. However, it's larger then the key, so when you put it on, if there's something else blocking the way that doesn't turn (like the pog security washer), then it won't work.

So technically if they created a new tool that was like the Gator Grip Socket but smaller, you might be able to still unlock the Pinhead locks with it. But even that would be unlikely because of the way the pog security washer juts out that would block you from getting a secure seal on it.

Not the answer you're looking for? Browse other questions tagged lock security wheel-lock or ask your own question.

6
Experience with GPS trackers - thieves' reactions?
3
How secure are Security Wheel Skewers like Zéfal Lock'n'Roll?
4
How can I avoid tearing the valve loose from an inner tube with a wheel lock?
3
How to lock up a bike with a rear wheel lock?
8
How to ensure security of panniers when touring