Just discovered this site. My uncle gave me his old bike. The chain has been slipping and today we replaced the chain (previous was worn and stretched, the rear casette (to a used but less-worn one), and the two cogs on the derailleur. Now we can definitely see that the chain is slipping on the crank - on the front, not the back gears.

Could you all please help me determine what kind of new crankset I need that will fit best?

42 teeth in the largest 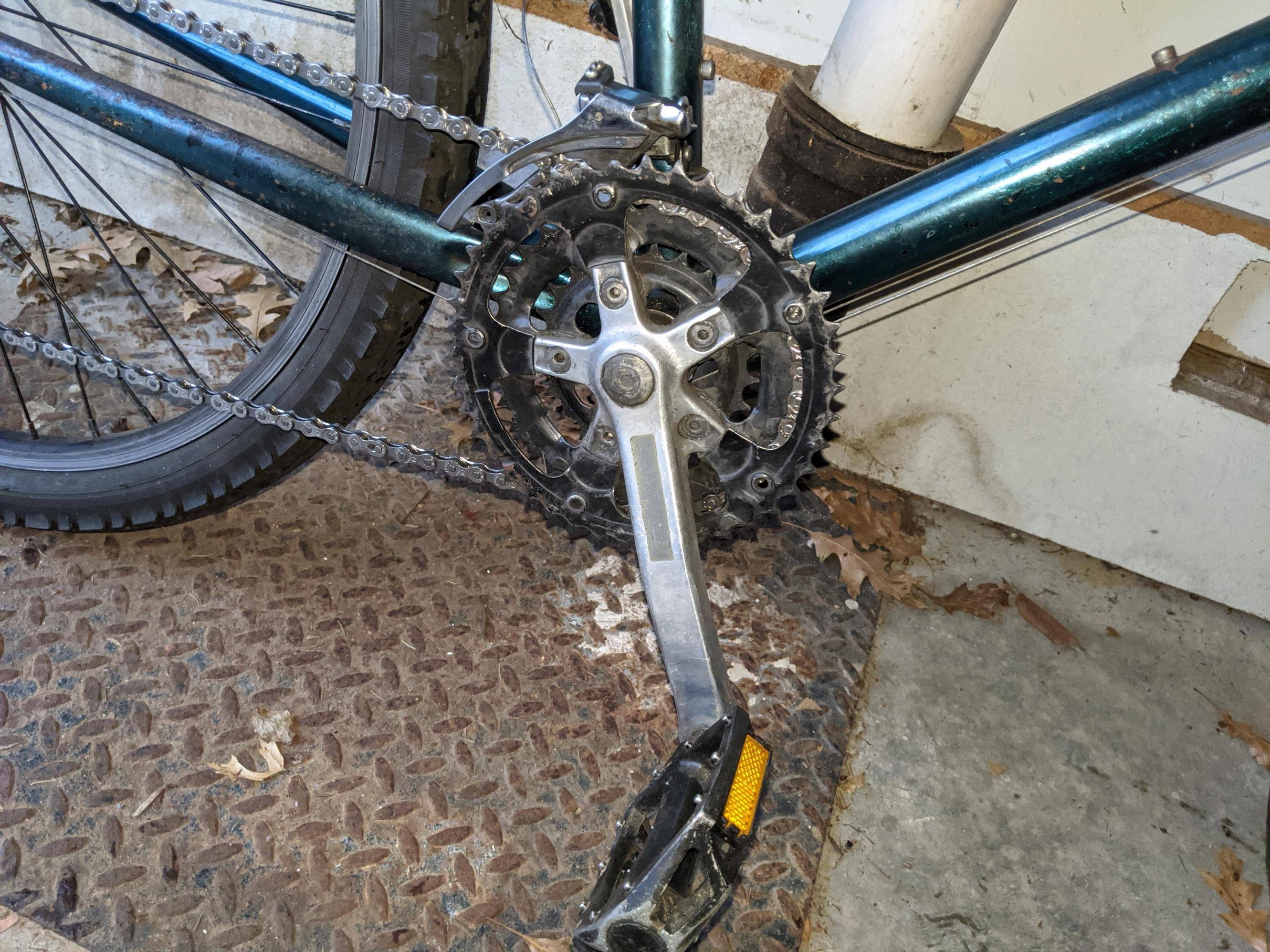 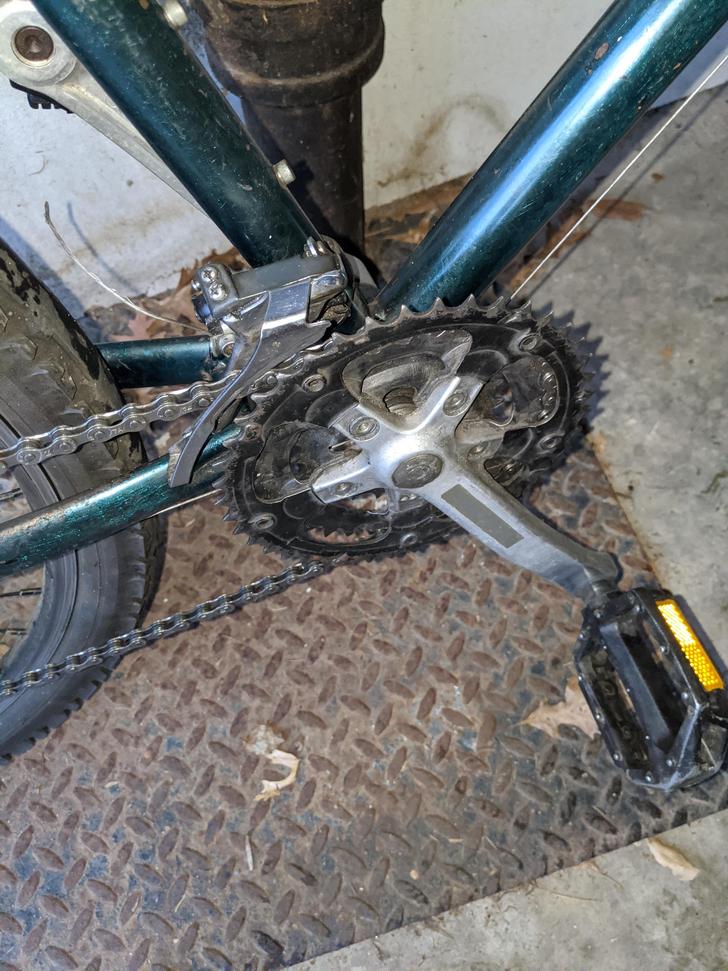 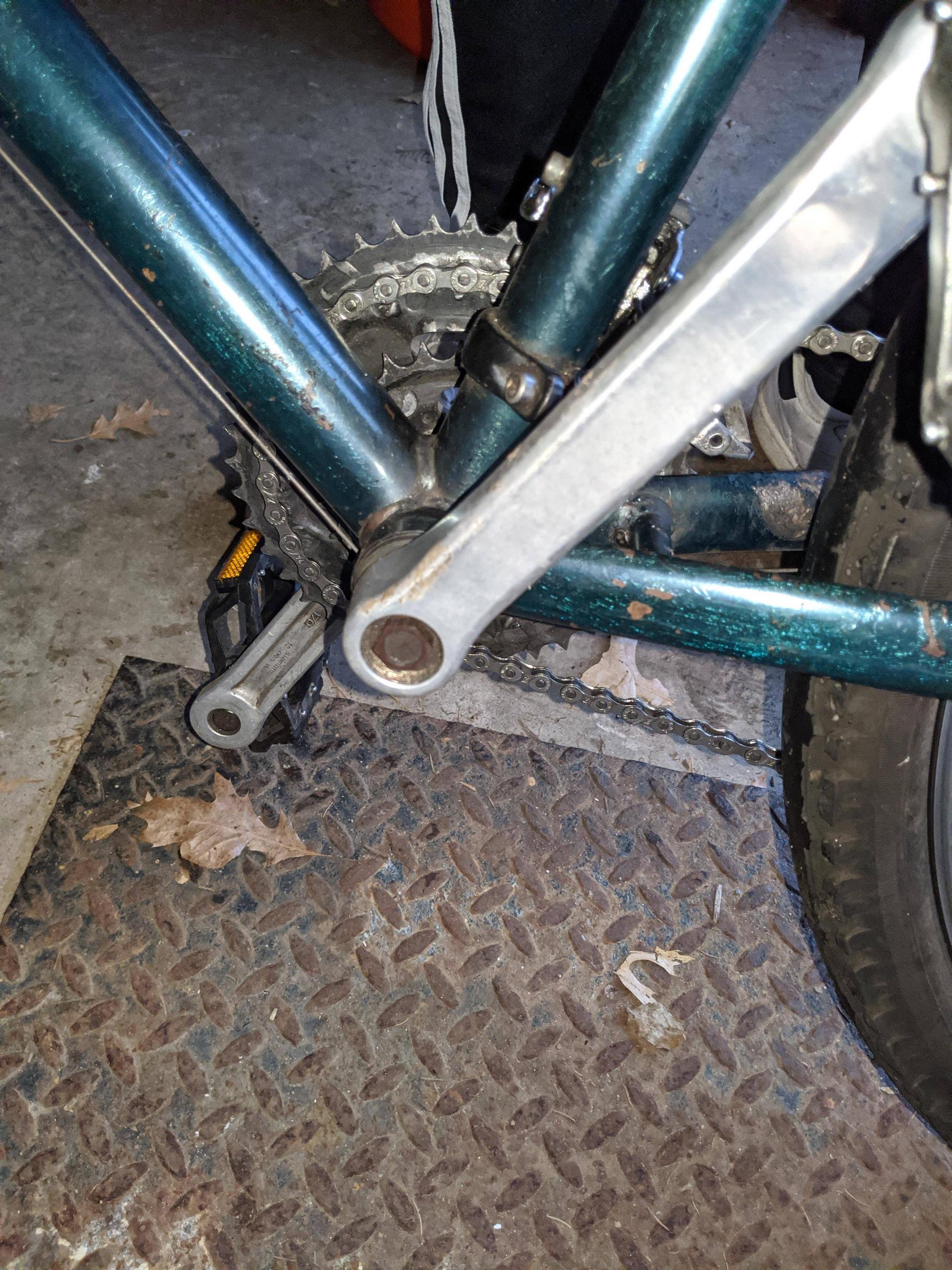 If you just want to go with something basic that's close to what you have, it's easy to get a replacement repair type crankset for this sort of bike. Check your tooth count, but it's probably 42/32/22, and then check the length, which is usually stamped on the inside of the arms. It will probably be either 170mm or 175mm.

The other distinguishing factor is that what you've got is a "low profile" type square taper crank, which is bike parts catalog lingo for "the arms are all bendy," as opposed to flat. They were the predominant type on 90s steel MTBs such as this. Square taper low profile cranks usually use the shorter range of bottom brackets, i.e. 115mm-ish, so if you want to re-use the existing bottom bracket, you'll likely need to get something similar.

However, that leads to the real rabbit hole: matching the bottom bracket. You want your front chainline to come out right. Different cranks use different length spindles to get to the same front chainline. Presuming the chainline is good now, and if the bottom bracket is in a condition that's worth re-using, the best way to proceed is pull off the existing cranks, measure the spindle, and get a replacement crankset that happens to take the same length according to its manufacturer specs. There's a further stipulation here that this bike could be old enough for its rear end to be a little narrower than the 135mm standard that was ubiquitous on mountain bikes from about the mid-90s on. Or not - doing this right would entail measuring. There are a lot of questions on this site about measuring chainline that can help you figure this out. Published BB numbers for the type of repair cranks you'll be looking at will be to give a modern front chainline of about 47.5mm, so if your target front chainline number is different for any reason then you'll have to compensate in how you interpret the listed spindle length.

If the existing bottom bracket is fairly worn and you think this bike is going to start being ridden again, replacing it with a decent cheap new one like a Shimano BB-UN26 probably makes sense because they're so cheap. If you want this to be a minimal cost repair, then do the above.

All that said, if you just search around for "42/32/22 square taper crank" you'll see tons of options.

Not the answer you're looking for? Browse other questions tagged crankset drivetrain-slipping or ask your own question.