As the title says, I lost the original axle hub skewers (both front and back) while moving. I bought this bike secondhand over a year ago, and it's a 2015 Diamondback Century 2. Diamondback no longer hosts the product specifications and won't respond to my customer support request, for some reason. I can tell you the original axle hubs are in place.

I did find the product specifications of this model/year on REI, however, they only list the rear/front hub specifications as DB-24H (rear) and DB-20H (front), with no mention of the dimensions (in any way I would understand).

Could anyone help me understand better how to figure this out, maybe using the information from REI above? Also, any tips/direction on what brand/website would be a good place to find replacement skewers. I'm seeing a wide range of prices online and many of them don't even list their product dimensions.

If you have thru-axles, you probably need to call Diamondback Bikes. Their FAQ lists a number for consumers to call about replacement parts. Because REI is a national chain of outdoor equipment stores in the US, if you're still in the US, you may be able to get to one, and they may be able to help you as well - although they may not have the correct information on hand themselves and probably don't stock replacement thru axles for every bike, so they would probably end up reaching out to Diamondback themselves.

Since you asked, we should discuss the dimensions of thru-axles! As you've noticed, they are more complicated than quick release skewers. QRs can have a bit of the rod poking out the frame end, so they could be made to standard lengths. The over locknut diameter of rear road and MTB QR hubs is slightly different (130mm and 135mm), and that was the only point of differentiation. In fact, an MTB rear QR will fit a road bike, you'll just have some rod sticking out the left side of the bike. Front QRs are the same width between road and mountain bikes. Also, some early disc brake bikes took QRs, although by 2015, chances are you should have had TAs if the bike were disc brake.

First, there's the axle diameter. The current Century 2 has a 12mm diameter axle in front, and a 12mm axle in the rear. Many mountain bikes and some gravel bikes take 15mm axles in front. Many current mountain bikes take wider hubs than the current road standard of 100mm front, 142mm rear. In any case, chances are that your bike takes that standard.

From there, I'd refer you to the Robert Axle Project (note, they make and sell thru axles), or to this page on Modern Bike. Because forks vary in how thick they are at the dropouts, thru axles also vary in their length. So, a 12x100 front thru axle is really longer than 100mm - RAP's site says that a 125mm thru axle would fit my gravel bike.

Another aspect is the thread pitch, or the distance from one thread to the next one on the threaded part. Thread pitches can be 1.0mm, 1.5mm, or 1.75mm.

Last, not discussed on either site, but thru axles can have flat seats or conical ones.

RAP does have a bike database, and it has some information on Diamondback bikes. It is able to suggest a front thru-axle that should fit all Diamondbacks. However, it's not able to suggest a rear thru-axle for your model. It suggests measuring your thru-axle ... which you don't have. This, unfortunately, is a lesson not to lose your thru-axle. If you're transporting the bike with wheels off, best practice would be to thread the axles into the frame. In any case, it does seem like calling Diamondback is the best option. 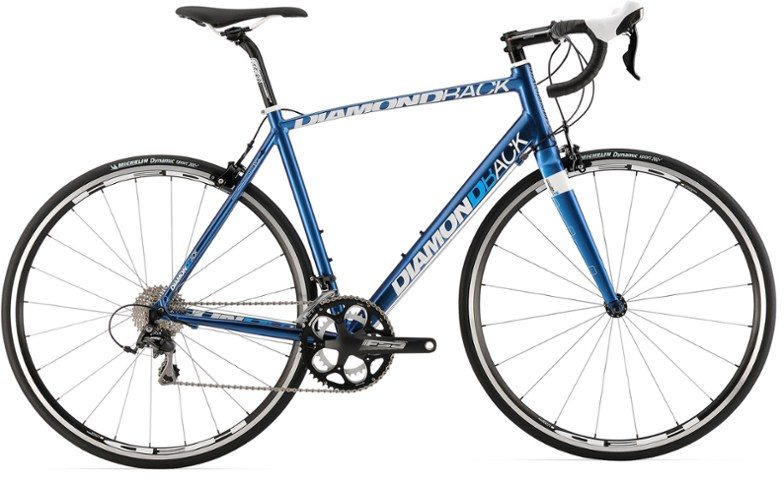 Presuming this is you, tt's a standard 130mm-spaced, rim brake road bike. You need any set of quick release skewers. Get a road type set so the back one doesn't stick out past the nut.

Not the answer you're looking for? Browse other questions tagged hub through-axle century diamondback or ask your own question.