How can I make road-bike rims survive tree roots on trails?

It would be nice if there was in my area an extended network of bike paths on regular roads.

Unfortunately the network is in its early phases, and given the speed it's introduced at, it may be another 100 years until it's done.

But I'm not here to preach to the choir.

Since bike lanes are a rarity, I generally use trails, even though they're not well-maintained. Every few minutes, I'll encounter root damage. It's usually visible enough because they're highlighted with an orange marker. 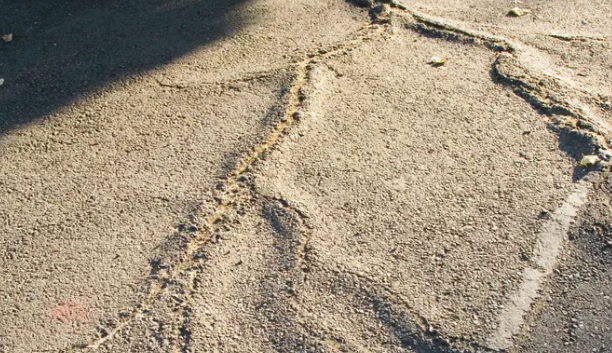 With a mountain bike I don't worry about hitting these obstacles, even when they straddle the path perpendicularly. The tires will take it.

With a road tire on a road bike I'm less sure. What would you / do you do?

The physics of the problem

I was able to appreciate the suggested solution intuitively, but not rationally. If you're also wondering "but why would rising help?", head on over to Physics SE for the answer. Succinctly, you squeeze (crush) the light/fragile frame between the ground and your body mass (which is substantial compared to the frame).

Simply unweighting the saddle is enough to roll over most tree roots even on skinny tyres. On my 28mm tyres I don't even need to bother doing that very often. You may want to lift the front wheel in severe cases, or on the very lightest (low spoke count) front wheels.

The bike can handle those bumps just fine. As noted in other answers, just use the usual techniques for dealing with uneven terrain: get your weight off the saddle, keep your arms and legs loose, and let the bike move with the bumps as you keep your body's center of gravity in one place.

That said, unless you're riding your bike completely stripped down of accessories, you'll probably also want to slow down. It's also useful when dealing with root damage like that to try to not cross them perpendicular, but instead find and ride the line that crosses the bump where it is most closely-aligned with the path (if you're riding the same path over and over, you'll learn the best lines to take). With respect to the latter technique, if the root damage is accommodating in that way and it's done properly, you'll barely notice the unevenness at all.

Not only will this be much more comfortable, not all of the accessories on your bike are built to take the kind of jostling that the bike itself can easily handle. More than once I've lost the cover and batteries from lights going over bumps like that — first time it happened, I didn't even realize until I got home, and I had to go back and search along the trail for my parts :( — and even if it stays on, a pannier will bang around and increase the wear on the rack or on itself having to handle that kind of movement. If you are carrying delicate items in the bag, in a basket, etc. that would also be a reason to make sure the bike itself isn't hitting bumps too hard.

As far as your specifically-mentioned options go:

Per your recent edit:

No, that's not the point. The point is to maintain your body position, while allowing the bike to move ("float", to use a vernacular term). This is the same purpose as a suspension on a bike; indeed, on a fully-suspended bike, you might just ride straight over the bumps and not worry about them at all.

I could unweigh only one instant before hitting the root. Getting it right will take practice. Then I would also be pulling the bike frame ever so slightly up. …

No need for all that. And for better or worse, a road bike just doesn't have a geometry that is very conducive to that sort of handling.

Lifting from the saddle can be viewed as just a "mode" of cycling. Lift yourself as you approach, keep your weight supported as you traverse the uneven terrain, and then when you are finally past the problem, go ahead and sit back down. The goal here is not to anticipate the bumps and try to specifically maneuver the bike in concert with them, but rather to simply allow the bike to react to them without moving your body around as well.

Because the bike's weight is so much less than your own, your own inertia will give you all the feedback you need in order to absorb the bike's movement with your legs and arms. You will move up and down slightly with the bumps, just as a vehicle with a spring-suspension will move a bit. But your own movement will be a small fraction of the movement forced on the bike by the bumps, and with that sort of tree root damage on pavement, that leaves your own body moving in a nearly-perfectly-straight line.

Still not with objective of flying, but to reduce the weight of impact on both wheels

Yes. Because you allow the bike to move with the bumps, the force the bump imposes on the wheels, and thus on the whole bike, is absorbed by the movement of the bike. If your full weight were on the bike and the movement not absorbed by your legs and arms, then a much larger force would be applied to the tires and wheels. Mostly likely they are strong enough to tolerate that force without failure, but a) it's obviously better to apply less force to machines if you can, and b) regardless of how strong the machine is, your comfort will be significantly greater.

Further reading:
How to properly ride over ripples on gravel roads (washboards)?
How can I reduce back pain on a shared bike with poor shock absorbers

…and for more advanced technique/scenarios:
Is it safe to go over roots at high speed on a cross-country bicyle?

Assuming that your wheels are in good shape, they are designed to take bumps like that. Without knowing what type of wheels you use, it does help to have wheels with at least 32 spokes. I keep my elbows lose and my grip firm, and when I see those bumps coming I get ready to lift my butt a bit.

Essentially the problem is because all of your weight as a static mass is trying to be moved upwards by the lift caused by the bump. As you can imagine, you and the path are essentially crushing the bike with all the force of your bodyweight times the acceleration.

The only way to fight this is to unweight your bike. your legs are not bad shock absorbers, however I’ve found via riding a cyclocross bike on corrugated roads, the only way to fix this problem is to add a suspension seat post.

the key to suspension seat posts is that they need to pivot backwards towards the rear wheel. it cannot be a seatpost that springs into itself.

I use the $80 option, my partner has the $500 option, and in my opinion, the only difference is the weight of the device. Mine works every bit as well.

Warning though, once you’ve used one of these, you’ll never go back to a normal seatpost. it’s like riding on a cloud.

1st - PUMP UP YOUR TYRES! I believe keeping the pressure up helps stop punctures and buckling.

2nd - Get out of the seat. Stand on the pedals when you are going to hit something less than smooth, i mean why the hell wouldn't you, unless, like a incompetent boxer, you like getting pounded in the ring.

OP here; just adding one detail. It was misguided to think that the rims are the ones that will get damaged. If the saddle is not unweighed, or even if it is, but the road bumps are "too high" and you don't slow down, you risk damaging the cones. You can see here the kind of deep damage that can occur to the cones.

Not the answer you're looking for? Browse other questions tagged road-bike trails or ask your own question.

11
How to properly ride over ripples on gravel roads (washboards)?
4
How can I reduce back pain on a shared bike with poor shock absorbers
3
Is it safe to go over roots at high speed on a cross-country bicyle?
6
Durability of road bike (25mm tyres, 15mm i.d. rims, 32 spoke wheels) for commuting
3
How do I identify the correct replacement cones, or the right cones+axle?

25
How can you speed a road-bike up?
47
How do on-road mountain bike speeds translate to road bike speeds?
26
How Strong is my road bike?
9
How can I evaluate a used road bike i intend to buy?
4
What brand/year/make is this road bike?
4
Would a hard tail 29er be a good starter bike for road and light trails?
5
can I use my road bike off road?
2
Just how much difference does your bike make?
1
What make road bike is this vintage 1980s bike?