How do mini penny-farthings ride compared to regular size pfs?

I'm considering buying one of these with a 28" front wheel, pneumatic tires and rear caliper brakes. How do they compare to actual penny-farthings? I've read on another forum with unreliable responses (non-riders giving opinions based on movies) that any high wheel bike should only be ridden on pavement to keep from taking a header. Would this be an issue with the kind of bike I'm interested in?

I wasn't actually asking about functionality as a commuter bike. For that I like a cruiser. I want something to have fun with. Oddly enough I don't like heights so penny-farthings make me a little anxious. I suppose it's from being fairly high up without much of anything beneath me. I do know that it is necessary to pedal against the bike when slowing down. Applying the back brake first is helpful in preventing a header within theory. Most people walk a penny-farthing down hills. True penny-farthings have solid rubber tires. This one has pneumatic tires. The big wheels are supposed to just roll over ruts unless they are big ruts. This front wheel is much smaller. Does that mean that it takes a header over every rut? The high wheel bikes put the rider almost over the pedals. This one technically puts the rider slightly farther back since the legs are longer in relation to the radius of the wheel. Does that help keep the bike from flipping forward? Sorry to be so techincal but that's sort of why I was hoping someone here rides one.

My impression is they're a toy only, not to be used for travelling, just tootling around a park or around home.

My unicycling coworker has said that they are essentially unicycles with a training wheel, and are a lot of fun for playing about. Also, I've seen video of them being used in street performances like a juggler or similar.

But no, you wouldn't commute on one, and the ergonomics would make training on one uncomfortable. The 29" wheel would suit a kid, not a grown adult.

Said another way, they probably fixed gears so you cannot coast, you have to pedal.

The rear brake will be mostly useless - the common wisdom is that the front brake of a bike does most of the real work of braking. Trying to stop with the rear brake only simply drags it out longer. Your mini-farthing will likely stop poorly on brakes, relying more on fixie-skills like reverse pedal pressure, and that its overall speed is low.

I'm sure they're a lot of fun, but not a lot more than that. With practice and good technique, I'm sure they can be ridden all sorts of places, but perhaps not aggressive/risky offroad/downhill etc. 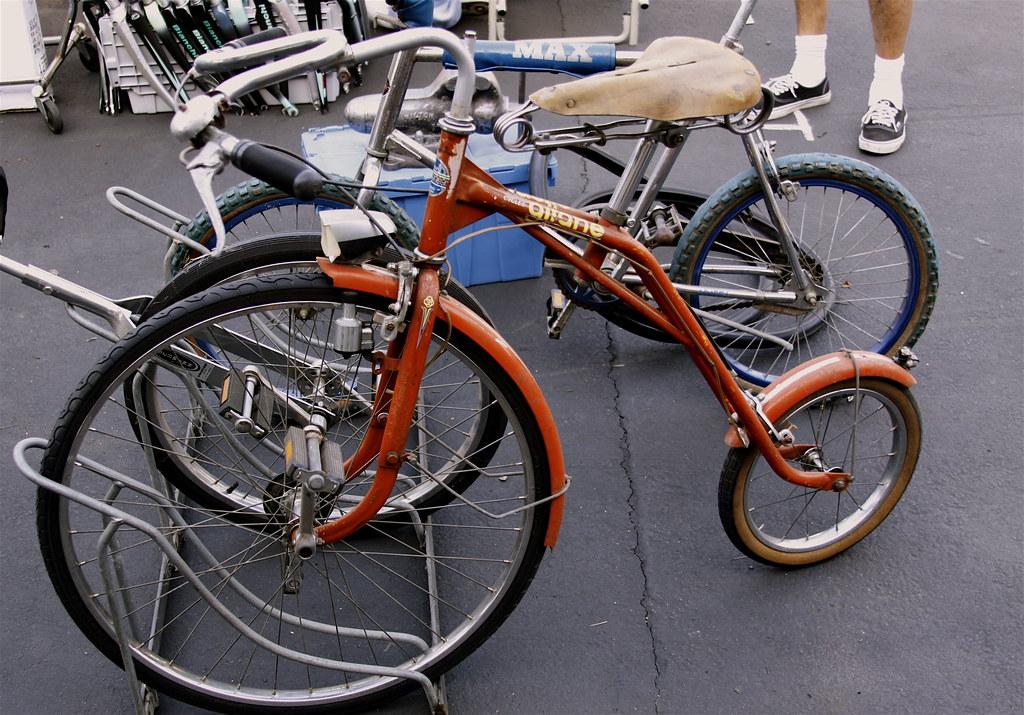 Example of a MPF with quite a lot of rake. 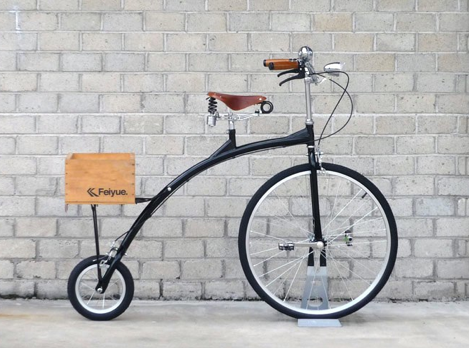 The two bikes above would have massively different handling - no conventional bike would risk having such a vertical head tube.

Being fascinated with Penny-Farthings for ages, but unsure of whether I'd stick with riding them to justify spending an upwards of £1300+ on a proper one, I opted to buy a mini 36" PF first which I paid £325 in 2015. Helpfully, this model had a rear wheel caliper brake. Most PF's don't have mechanical brakes, so having a brake while you're figuring it all out isn't a bad thing. (If interested in the nuances of braking a PF, go HERE)

Whatever the wheel size of a Penny-Farthing, if your weight is over the big wheel, the risk of doing a "header" will be present if you hit an obstruction. That's to say it's not the wheel size that creates the risk, it's the rider being sat over the direct drive wheel. However, I'd actually recommend learning Penny-Farthings on a smaller one- it's not a bad thing.

I gained the fundamental skills of mounting & dismounting with the smaller 36" PF which has a mount peg and must be mounted like any full-sized PF. And more importantly, I really enjoyed riding it. And the smiles on peoples faces when I toodled by (any PF rider will attest to this common phenomenon) validated that this was something I wanted to continue with.

So I bought a UDC MK3 50" Penny-Farthing (current model is the MK4). Compared side-by-side to the 36", the 50" PF was huge. Although it appeared quite intimidating, having gained the skills and confidence on the 36" PF, I got to grips with the 50" quite quickly and most importantly, with no injuries. And I'm not easily intimidated: I'm a skydiver & B.A.S.E jumper. But when I first looked at the 50" I immediately thought: "Hmmm, get this wrong and you could get pretty busted-up..."

So I got my foot into the world of Penny-Farthings with the cheaper 36" QU-AX PF and progressed to the full-sized 50" PF. So I wouldn't dismiss smaller ones as "toys". The key thing is get a smaller one like the QU-AX I learned on which are organized as closely as the proper Penny-Farthings so you can gain the skills to progress to a full-sized PF if you want to later. I do not regret for a moment buying that QU-AX to start my journey learning to ride Penny-Farthings. Penny-Farthings are amazing bicycles

19
How can I safely go downhill on an antique penny-farthing bike?
7
Proper Posture for Preventing Painful Posteriors on Penny-farthings?
7
Are there penny-farthings with an internally geared hub?
26
Are Penny-Farthings Legal to Ride on Public Roads (UK)
1
Securing a Penny Farthing- HOW?
20
Penny-farthings: Skills required to transition from standard bicycles?