I've had an eternal struggle with my current bike over brake contamination. The levers and calipers are shimano ultegra r8000, so the latest and (almost) greatest.

I first noticed it when I took it to a repair shop (i no longer use) for a bleed, it came back and the front brake would squeal like crazy and at low speeds had little to no braking force. You can stop from speed but then struggle to come to a halt without using your foot.

At around 2000 miles I tried to replace the brake pads, when I took them out they were black with grime on both sets (front & back), not to mention worn down to the metal. I replaced them with the L04C sintered pads, gave the callipers a good cleaning with a towel (no chemicals) and fitted the new set.

Annoyingly all of my braking issues are back, now I probably should have cleaned the rotors, I simply used some muc off disc brake cleaner on them. I would like to know the best way to clean the rotors, I've inspected the pads and they are looking fairly black now, with plenty of tread left. I'm going to abandon these pads and fit a new set. For the rotors I plan to completely remove them from the wheels (they are center lock fitted) and try and treat them off the bike, what is the best way to fully clean them? They have plenty of wear left in them but you can see these black grooves in them, and plenty of muck on the back that I struggle to get off.

Below are images of the rotors after soaking them in disc brake cleaners, waiting and then wiping them down with a clean, microfiber towel. 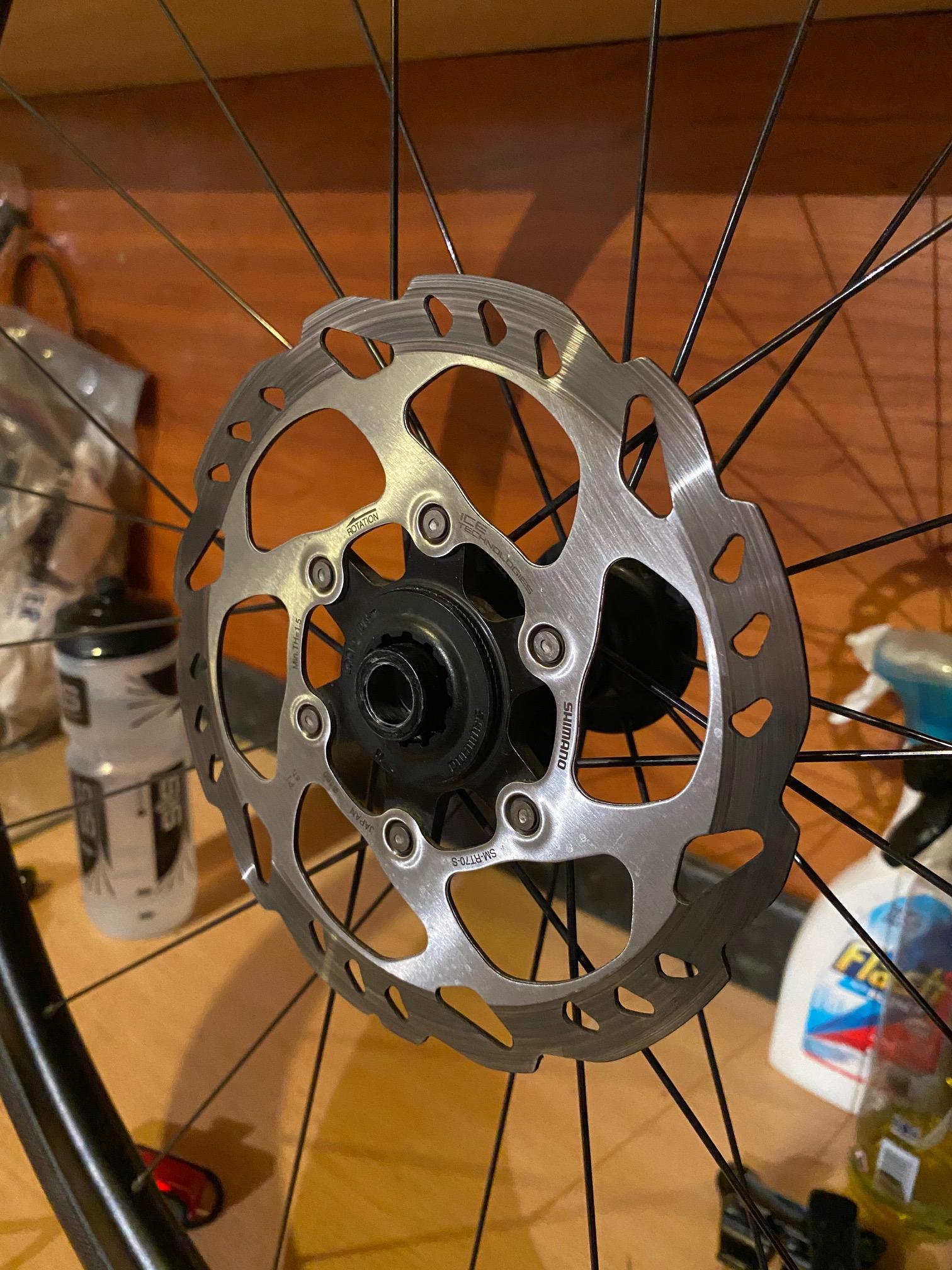 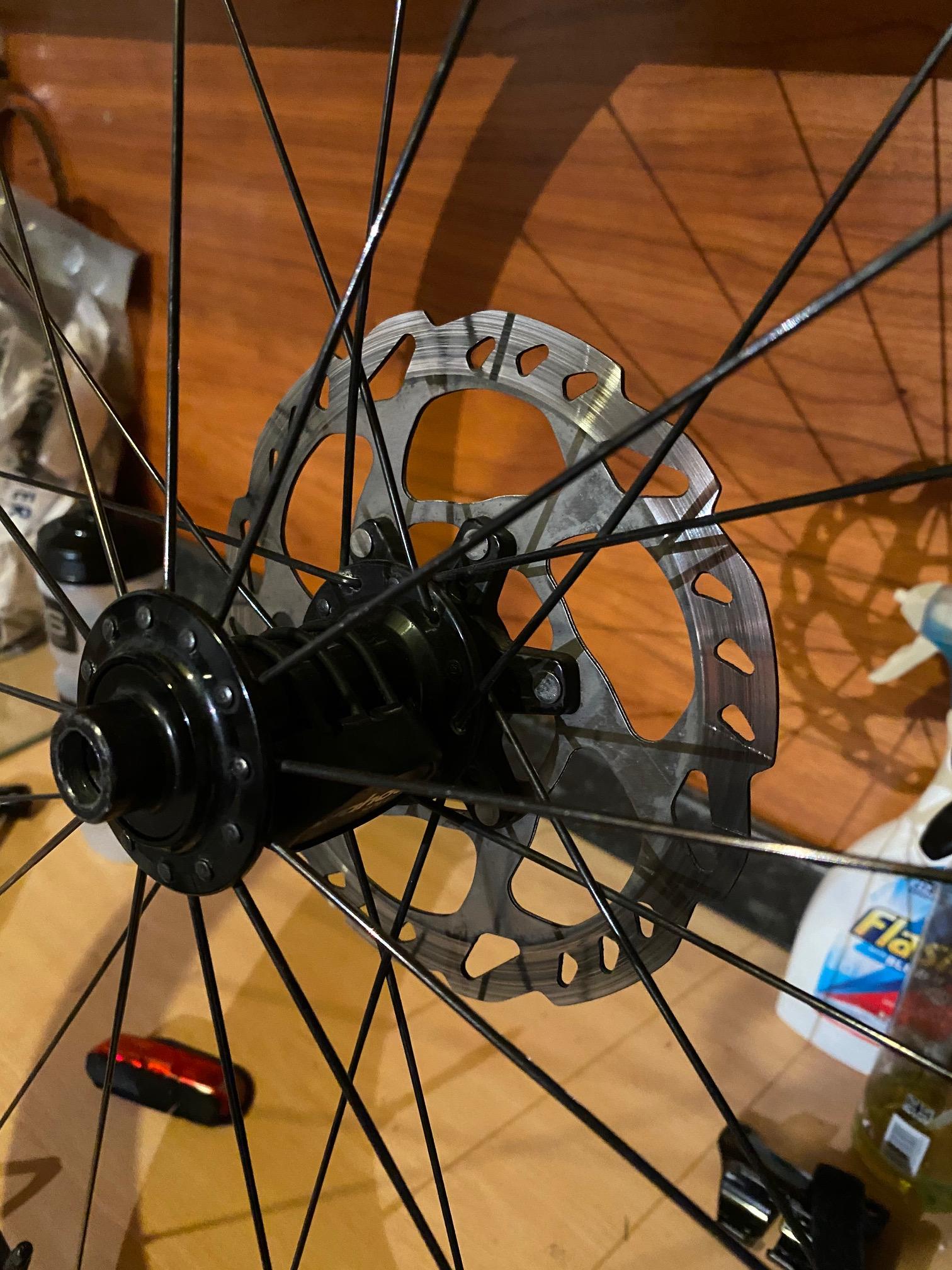 Front Wheel Inside Rotor - note the increased dirt on this side

Looking at ways people clean their disc rotors, I've seen plenty of suggestions that I would need to burn the contaminants off the discs. Would the best approach be to remove them and use a blowtorch, should I soak them in some nasty chemicals overnight before I try to heat them? Do I try baking them in the oven?

And finally, what is the best way to prevent the brakes from becoming contaminated in the future? it's really off putting when they squeal and don't perform how I'd expect because it means I'm more reserved whilst out riding on the bike, leading to reduced time riding around outside. I commute on this bike (50 miles a week) and then ride about 50 on the weekends also, so it see's it's fair share of road use. I tend to wash it once after my big ride on saturdays and will rinse it off if it's been raining, any day that occurs (since I live in north east england, the acid rain..). I've owned disc brake bikes before and never had half the issues I've had with this, I had a cheap trek with tektro brakes and the brakes were sharper and never had any issues with contamination whatsoever (i did around 500 miles on that bike before a motorist happened).

Thanks for any and all advice :)

Isopropyl alcohol and/or brake cleaner from the car trade. Avoid washing up liquid in the cleaning water as it may leave a film of water dispersant. Don't forget the pads or replace the pads if they're too badly contaminated. Heating is a bad idea, it could damage the discs irreversibly.

To avoid contamination cover the rear disc when lubricating the chain and wipe off the excess of lubricant before the ride. Another source for contamination may be slightly leaking seals in the brake callipers.

But then concerning the lack of stopping power after new parts were fitted, did you break-in the pads and the rotors properly?

Not the answer you're looking for? Browse other questions tagged disc-brake hydraulic-disc-brake cleaning or ask your own question.

4
Sprayed Lubricant on Hydraulic Brakes, how to clean?
8
Removing wd40 from disk brakes