I recently bought this bike from a non bike person who didn't know anything about it. I've looked at thousands of pictures and hundreds of websites and I cannot find this frame. So, that means it is either rare, or junk. There are no markings anywhere. No serial number. There is a "1" and "B" stamped/cut on the drop outs. I don't know if this is some kind of logo. Pretty sure the frame is aluminum. Bike is very light. Most of the components are Gran Compe (crankset, seat, seat post, brakes, etc.) Any help would be appreciated. Hate it when I can't solve a mystery. Strange design without a seat tube. Three paralled tubes welded together forms the frame. 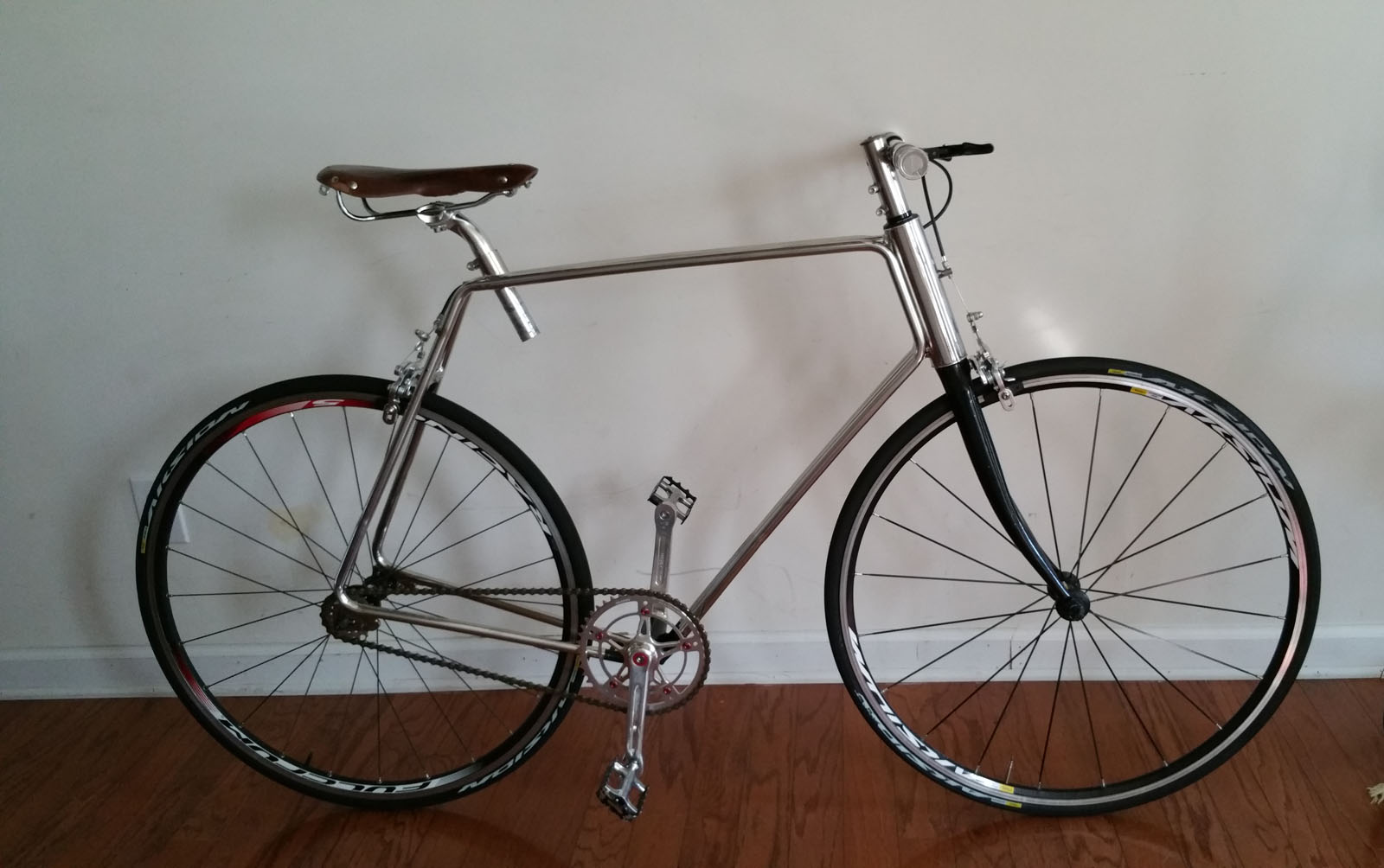 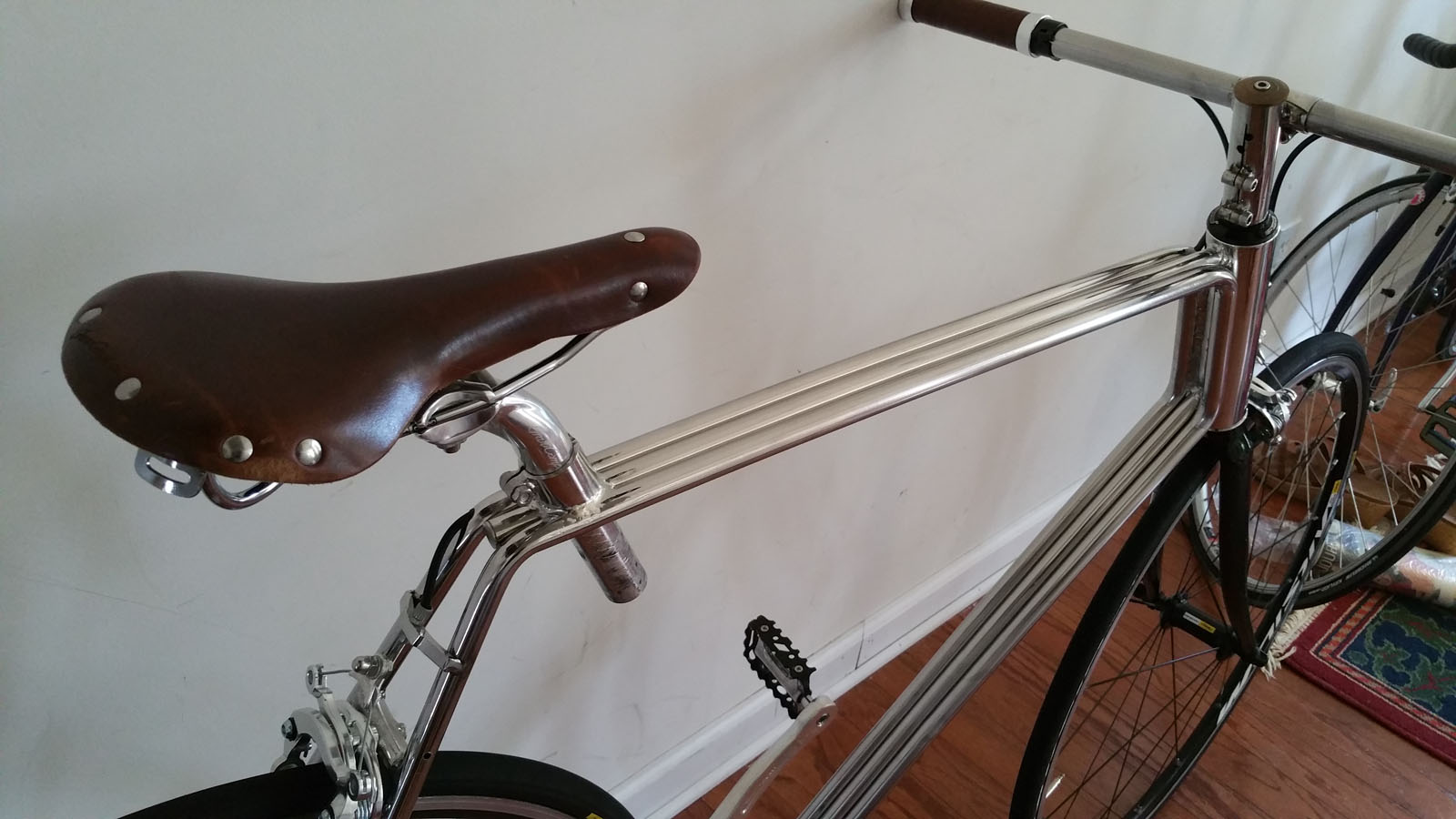 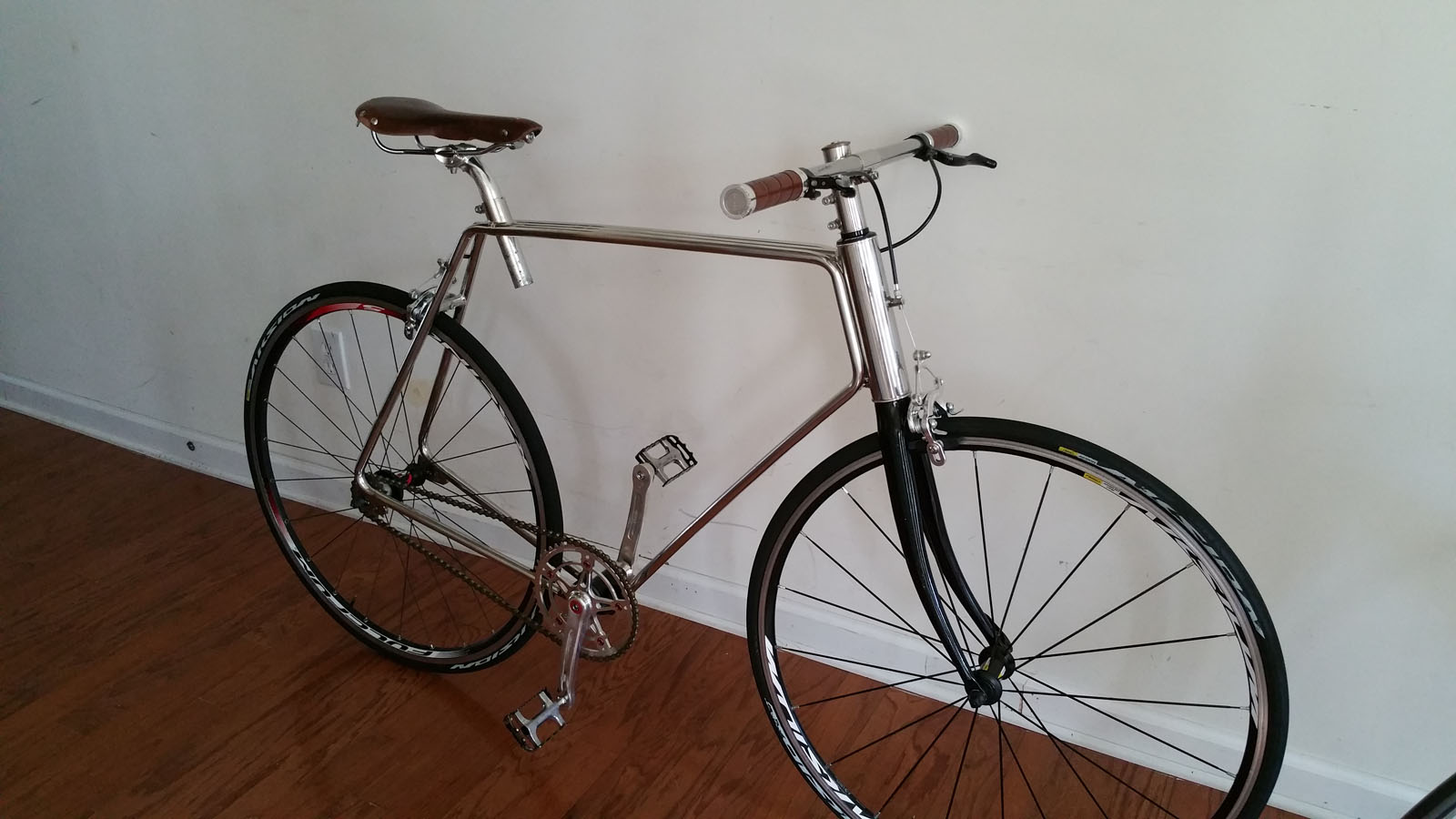 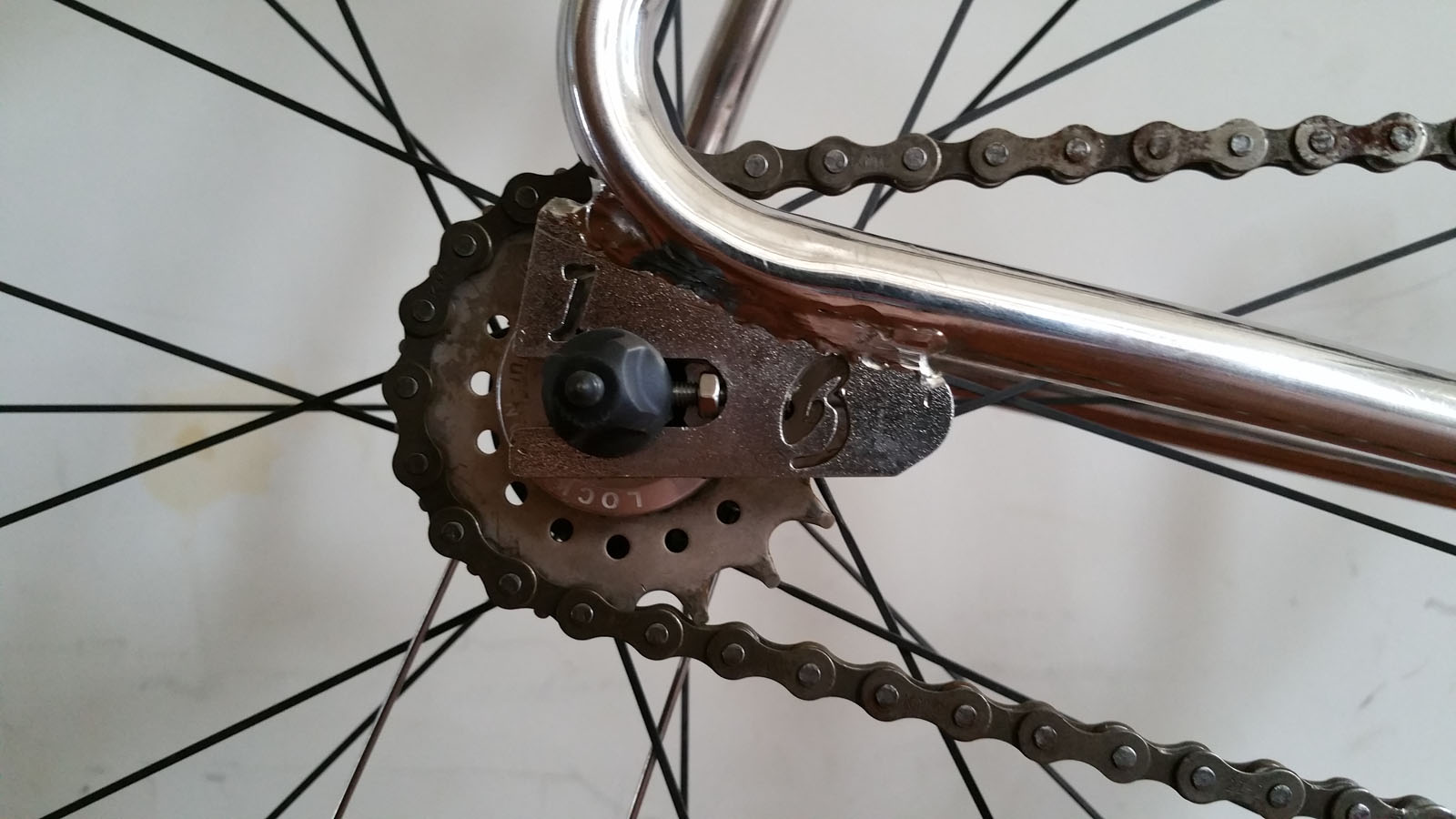 Since you guys have all been so helpful, I thought you'd like to hear the answer to this mystery.

The bike was indeed stolen. I was able to find the rightful owner.

The frame was custom made of stainless steel in Capetown South Africa by BouwerWorks. (So, the 'B' did mean something). This builder has apparently stopped making frames, or else, has stopped any kind of marketing. His website is down. But, I found his Pinterest Board (look at the profile pic) and also found an article on a design site with info.

Most of all, I'm happy that the owner is getting his bike back. Thanks again.

Adding a bit more info. SO, I found the owner first and that is how I got revelation on the frame. I have a friend that runs a local charity. Village Wrench - They go into neighborhoods on weekends and do free bike repair for those who might have no other options - they do a mentorship program to teach people (mostly kids/teens) how to work on bikes, learn leadership, learn job skills, earn their own bike, etc. -- I sent him a message with photos. He suggested a few other people. One of them knew the owner (who moved here after spending time in Capetown) and was aware the bike had been stolen. After we connected, he told me the story of the bike and how it was made. With that info, I was able to find the BouwerWorks info online. A bike is only worth what someone will pay for it. But Bouwer regularly sold his frames $3,000 and up. So this owner was happy to reimburse me the $175 I spent. That low price is the main reason I suspected it was stolen. I provided the name of the person who stole the bike. A police report was filed a month ago. But I don't think the owner is going to bother with pressing charges at this point.

This is almost certainly a custom-made frame, and one that should be regarded as more of an artistic work than a practical device. The layout of the frame means that it will flex considerably as it's ridden (or even just when you sit on it), and likely the flex will be enough to lead to fairly early frame failure.

The first thing you need to do is to take a magnet and see if it sticks to the metal. If it does, the frame is steel (probably chrome plated), and that is good.

If the magnet does not stick then most likely it's aluminum, and aluminum has very poor "fatigue life", meaning that the frame will fail very quickly.

(There is a vague possibility that the metal is titanium, if the magnet doesn't stick. I've never worked with titanium, but you can likely differentiate it from aluminum by using a common pocket knife to try to carve off a small bit on some exposed edge -- aluminum will let you do this easily, but titanium is much harder. If it is titanium the metal alone could be worth a few hundred dollars, and the frame might be able to withstand more use than aluminum or even steel.)

I would suggest that you limit the use of the bike. No one weighing more than 200 pounds should ride it, and riding should be limited to relatively smooth surfaces. There is at least enough redundancy built into the frame design that it's not likely to fail catastrophically, but check it regular for cracks, particularly along the bends and at the joints.

And regard it as a work of art. (You may even consider checking whether a nearby art gallery is interested in it, or some other museum.)

As Bryce Covington says in his amazing solution to the mystery bike the Bouwer Works website is down.

But, the Wayback Machine managed to capture a bit of it for us to see.
It looks like there was more than one frame made like the one Bryce found. The bike pictured on the Bouwer Works website has very different components and the head tube looks shorter.

From the Bouwer Works website as captured by the Wayback Machine on October 29 2017: 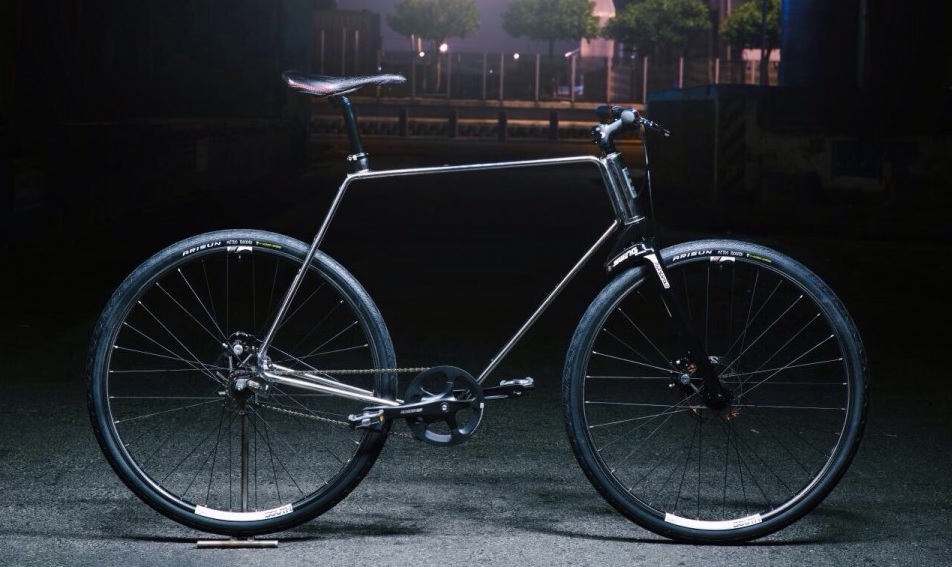 The Deluxe Coffee Bike was a custom project undertaken for Deluxe Coffee Works. This is a true custom handmade bicycle for the guys at Deluxe who don’t follow many rules when it comes to their coffee and life. In fact, there aren’t a lot rules that they follow in general.

A s-ram carbon crank to crank some speed.

The handlebars was custom bend from a single piece of tubing. The left and right side is joined via a triple clamp system to form handlebars and fork.

A Fizzik saddle was re-upholstered and hand stitched to perfection.

I liberate myself from the vortex of commercialisation that has influence the spirit of cycling. The soulless drive and following for “how light”, “how stiff”, “how expensive” has left the proverbial cabinet maker without wood and the leather tanner without leather. Remember why you city commute, why you cycle and what you like. Few experiences are as pure as riding a bicycle. Bouwer Works’ bicycles seek to give timeless form and feel, simplicity and self-expression to its owner. Oh, and the rules, few are followed so that we can dream, feel and create out of the ordinary masterpieces.

Although it's not a match, the frame concept resembles the "Viks" bike made by Velonia bikes in Estonia: 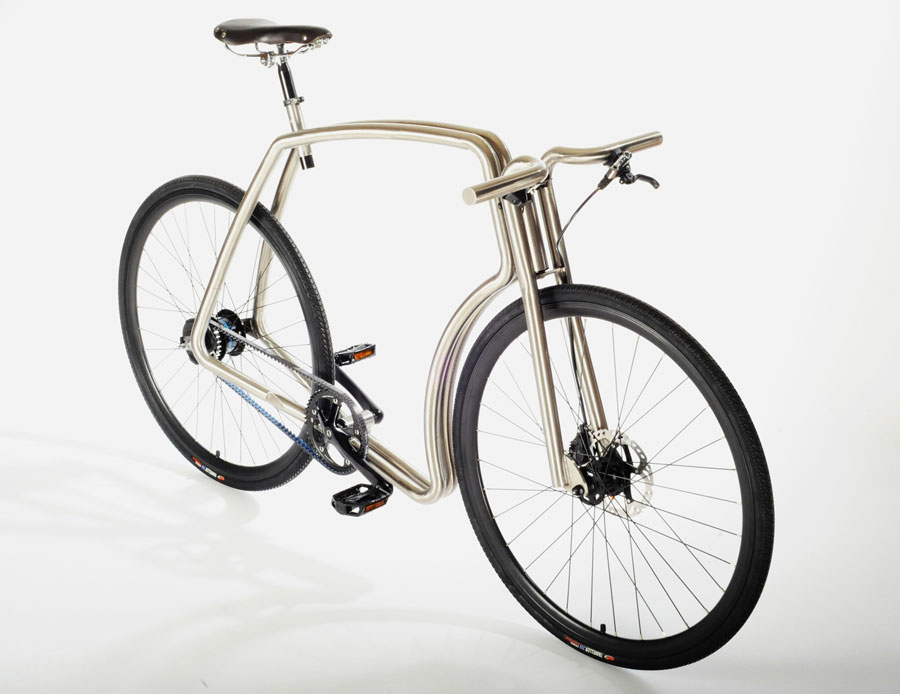 Obviously, the front end and down tube of yours are more traditional, as are the seat stays, but it's possible this company made more traditional shapes in the past or that others pioneered the parallel-tube design in the past. I just wanted to bring this to your attention to indicate that the design concept is out there, so it's not necessarily a one-off project build.

Unlike other commenters, I'm not too concerned about the strength of the frame. It's likely that the bottom bracket area will flex under load more than a traditional double triangle frame, but if it's made of steel, that's not going to lead to failure. The triple tubing on the down tube and top tube also potentially combine for much greater strength than the single thin tube of a standard frame.