I have multiple cheap bikes with 6-speed freewheels. These have 5.5mm sprocket spacing, whereas 7 speed freewheels had 5.0mm spacing. Later cassettes 9, 10, and 11 speeds have even narrower spacing.

That's all well and good, but for my 6-speed bikes, should I be seeking out a 6-speed chain in order to work best with them? It seems to me that the wider chain might be better for some reason such as grabbing onto the sprockets easier or being less likely to fall between them.

It's getting harder to find 6-speed chains. Many chains claim they are compatible with 6, 7, 8 speeds or even 6-11 speeds.

I'm not asking about what is strictly compatible or what will work, because that is listed on the package. I'm asking more about what works BEST. What compromises are involved in running "higher speed" chains on wider-spaced freewheels/cassettes? Is there benefit to avoiding the narrower chains on older bikes?

EDIT: The wikipedia link provided below had the key information that "Shimano used/uses the same chain for 6,7,8 speed designs". So, if the package says 6/7/8 speed compatible, there is no compromise at all, because from the beginning (at least within Shimano), the chains were exactly the same for those designs anyway. So, chains which advertise "6/7/8" speed, should probably be believed.

This does not explain to me why some chains are marketed solely as "8 speed", however.

Now I know there is no need, or even benefit, to trying to find "6 speed" chains, because they are not any different than 7 or 8 speed chains. However, chains which claim to be compatible between between 6/7/8 family and other speeds such as 9, 10 or 11 are not telling the whole truth.

The Wikipedia section on chain widths glosses over some history/is wrong.

Pre-indexing derailleur chains, i.e. what would have come on a 6-speed bike in 1980 and what many would call or label as a 6 or 5/6 speed chain, have a pin length of at least 7.6mm and usually around 8mm. New chains of this type are still produced and available but are not stocked very commonly in many places in the world. The ultra low end repair market is a bigger deal in some places than others. They can be replaced with 8-speed chains (most of which currently produced having a 7.3mm pin length) at essentially no detriment to performance. Here is a picture of one sold under J&B Importers (one of the largest US bike parts wholesalers) house brand: 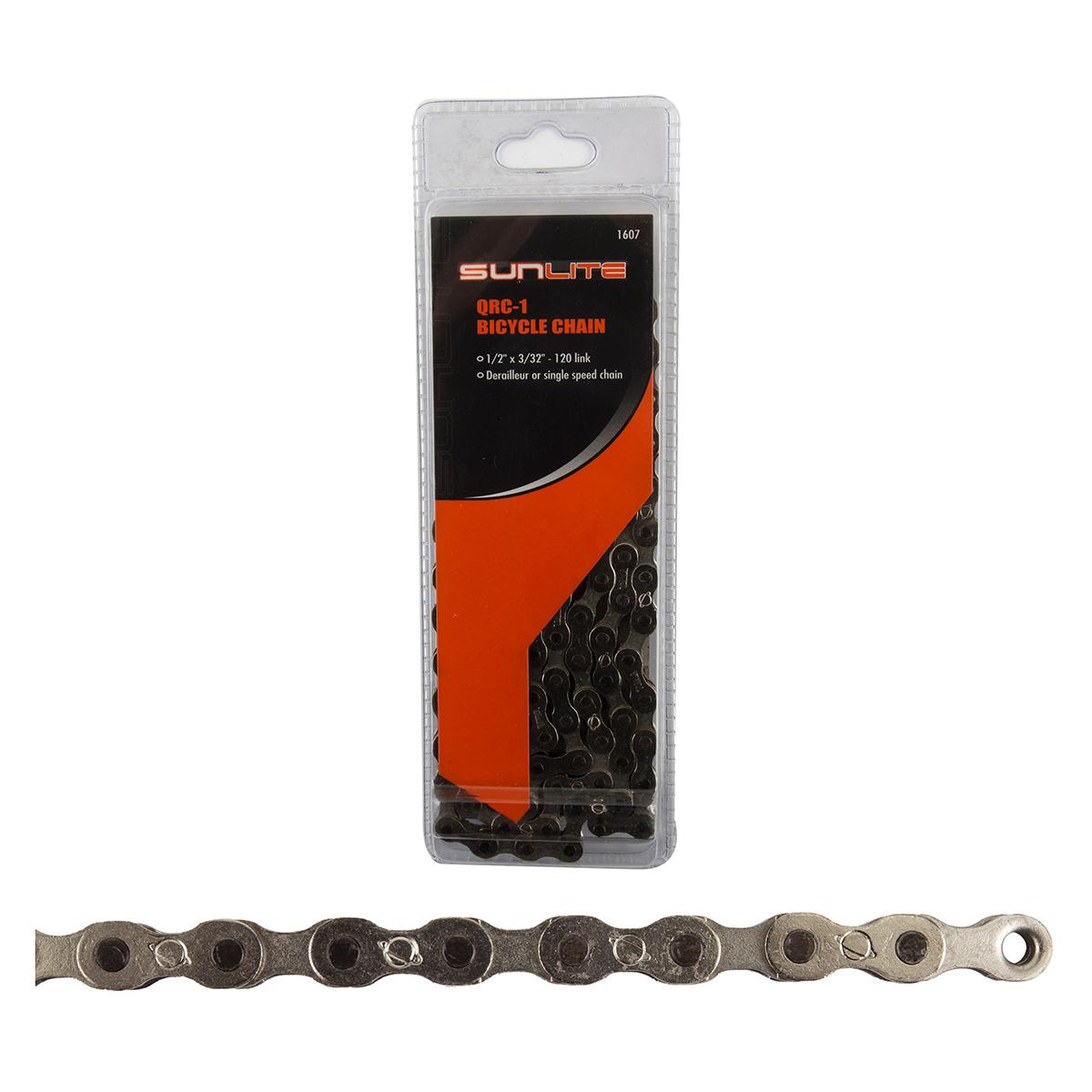 Contemporary 6-speed freewheels for indexed shifting have ramping etc and are mostly designed to be used with 7.1-7.3mm (aka 8-speed chains). I don't actually know much about what happens when you put the above 1970s style chain on them because I almost never touch those. I believe it works to drive the bike as the spacing is still right, just the shifting is bad or suboptimal with an indexed shifter.

The "going a speed generation narrower is fine" line for more modern index 8-12 speed bikes is bad, overly broad advice that's parroted much too frequently. Doing so causes laggy shifting in back and the mismatch with front derailleur cage inner width usually causes compromised performance in front. There are some various situations people get in that lead them to do this, a big one being putting an n+1 speed crank on an n speed bike and finding that the n speed chain rubs on the big ring in the inner/middle-small combinations, but there's almost always a better solution. In my experience, the issues with this are a little less pronounced with 9-speed-chain-on-8-speed-bike than in the latter generation mismatches, and that's where the notion may have come from.

The chain that works best is the one that is designed for the cassette/freewheel.

It seems to me that the wider chain might be better

The problem is that the wider chain will not fit between the cogs.

Many chains claim they are compatible with 6, 7, 8 speeds

And you can believe it.

What compromises are involved in running "higher speed" chains on wider-spaced freewheels/cassettes?

The teeth are wider and will not fit between the plates

Is there benefit to avoiding the narrower chains on older bikes?

Age of the bike is irrelevant.

Not the answer you're looking for? Browse other questions tagged chain compatibility or ask your own question.

11
What physically makes chainrings have a specific speed compatibility?
5
Do chains on single-speed last longer than those on geared bikes?
1
Do all 10-speed chains fit 3x10?
3
Mismatched chain and chainring
8
Gates Carbon Drive vs single-speed chain, long term lifespan and maintenance
9
When did bicycle chains go back to being bushingless?
2
10 speed chain on 11 speed cassette
0
Is the Shimano TX-505-8 rear hub compatible with 11-speed cassettes?
2
What size chain for Shimano CS-M7771-10 (11-36T) cassette?