I am trying to refill a Shimano Alfine BR-S500 disk brake system with oil. I have filled the reservoir with mineral oil... 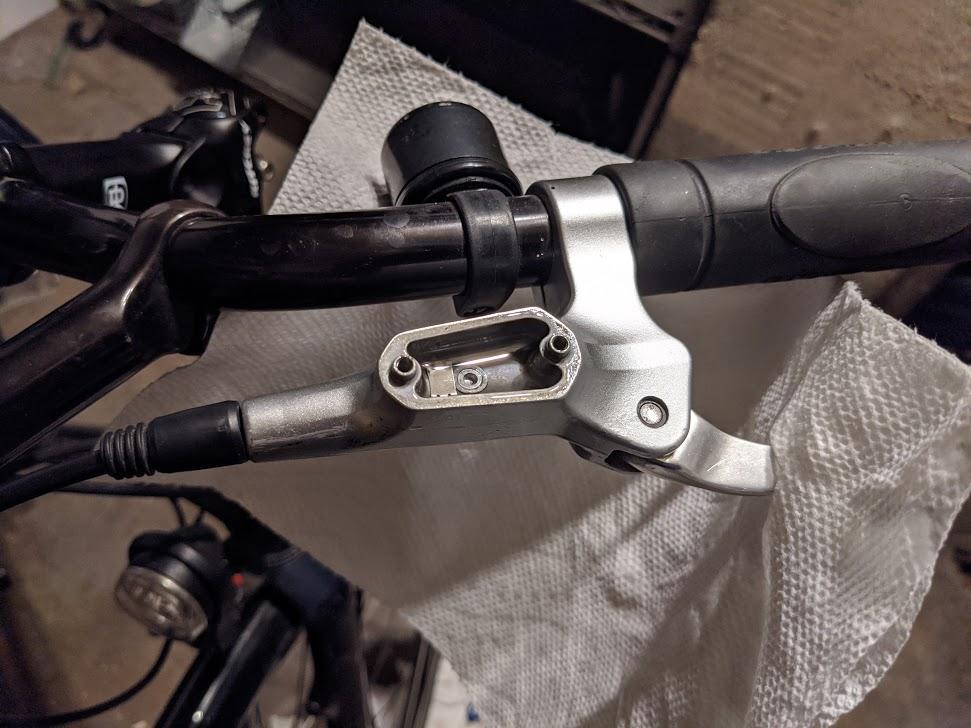 And am repeatedly squeezing the lever, but it feels like no oil is getting pushed into the hose line.

(Note that it is hard to see the clear oil in this photo, but the reservoir is full and the intake hole is submerged).

I have the bleeder at the bottom open 1/8 turn. I have also tried cracking the caliper apart just to see if any oil is coming down the line when I squeeze the lever, but none does.

The brakes were working fine before I drained it.

What am I doing wrong? How can I get the oil into the lines and into the caliper and pistons?

According to the manual, this system is not filled from the bottom like most oil-based bike brakes. Instead it says to open the bleeder at the caliper and then fill the reservoir up at the lever and pump the oil down.

(BTW: It is empty because I had opened the calipers to replace the o-ring in between the two halves.)

It turns out I just needed more patience. To fill the brake line, you need to:

There must be a very small bypass port inside the lever assembly to let the pressure equalize over minutes.

Not the answer you're looking for? Browse other questions tagged shimano disc-brake hydraulic-disc-brake brake-levers or ask your own question.

5
Why would anyone use DOT fluid and vacuum-based brakes?
10
Shimano RS785 hydraulic disc brake caliper will not reset
1
Why is the Shimano R3030 FD not compatible with the 3503 FC?
0
Tektro Draco hydraulic disc brake not gripping rotor well enough to stop
2
Hydraulic disc brake too loose
5
Should I replace my disk brake calipers?
2
Hydraulic brake bleed fail - try again or replace?
2
Is losing power when pulling Shimano GRX lever a bleed problem?
0
Why does Shimano Nexus 3 internal gear feel differnt on 2nd gear with and without the pin and gear set up