Riding experience of 21-speed vs. a 7-speed?

I am 5 feet tall, age 63, weight about 110 pounds, and I ride mainly for exercise on paved greenway trails. I used to ride a lot and can go many road miles, say up to 20 miles, quite well on terrain that is mostly flat but I struggle on hills. My old Marin 21-speed from REI feels too heavy and I want a bike that is lighter weight, a little easier overall to ride, and may "help" me get up hills (a la Atlanta, Georgia, if you know what I mean...) without having to walk my bike. However, the Marin has 21 speeds and I like being able to choose gears. But I am thinking of the 7-speed Cannondale Treadway 3 which I tried yesterday and it rides like a cloud! Apparently the 7 speeds only allow you to pedal to a limit on flatter or downhill terrain, and then it sort of spins out and you have to coast. At least that is how I interpret what the bike shop guy said. I'd rather be assured I will get some pedaling exercise while flatter sections. Is this a good tradeoff? I don't want or need a souped-up bike and at $635 the Treadway seems like a nice buy.

Do you use the front derailleur? It seems many people in reasonably flat areas do not. If not, you are riding a 7 speed. Take a ride and notice what gears you are using, particularly on the steepest climb and the steepest descent. The lowest gear will be with the smallest chainring in the front and the largest cog in the back. The highest gear will be with the largest chainring in the front and the smallest cog in the rear. Your gear ratios come from dividing the number of teeth on the chainring by the number on the cog. Now you can compare the ratios available on the new bike to what you are using on the old one. If you are having trouble up hill, do not accept a bike with any higher a low gear. If you want to pedal down hill, do not accept a bike with any lower a high gear than you use now.

If you are using all the gears you have, a new seven speed will either have a much narrower range of gears or much wider spacing between the gears. The spacing won't be a factor 3 wider because the gears overlap. If the new one has the same range, try shifting two gears at a time on the old bike. Is that too large an increment? If so, you need more than seven gears.

A 7 speed bike will have a very limited range of gear ratios compared to a 3x7 (triple front rings, seven sprockets in back, AKA 21 speed) bike. What your bike shop guy was saying is that the Treadway has the same low gears as the Marin, but sacrifices higher gears used for flat sections or downhills.

If you live in an area that you regard as hilly I think it's very likely that you will find a 7 speed bike restricting. There are reasonable quality 3x7 or 3x8 bikes available. The extra front gears need not add a huge amount of weight.

I used to ride, commute and do delivery on the city of Lima, Perú.

The city is mostly flat, with only a few sloped streets. I initially assembled the bike in a 8x1 configuration. The chainring was a 42 or something. The cassette was a something-28.

I could keep up with other fast riders on flat streets even if I had to spin a lot more. However, I had not low enough gearing to climb out of the basement parking. (climb 2 meters over a distance of about 20), so when I started in the delivery job, I changed the crankset to a triple (22-32-42) and it was absolutely the right thing.

I had been an MTB rider all of my riding life, so going back to something x3 was for returning to natural habitat. Not only for riding up slopes, but for city riding in frequent start-stop, specially with a loaded rack.

In this case, being the same bike, I can say I made an "all other things equal" comparison.

I have ridden 6x3, 7x3, 8x3 and 9x3 bikes, as well as singlespeed. I'd say the change from one to the other is not such a big difference as going from x1 to x3. That is, adding one sprocket is just that, one more sprocket. But adding a chainring is like adding 2 or 3 sprockets (in terms of range widening) even with all the overlapping ratios.

On the other hand, a bike that feels "heavy to pedal" may be a symptom of lacking maintenance, cheap transmission components or even bad bike fit. I have rode heavy bikes that are like butter to pedal, and also cheap bikes where no amount of maintenance would make them comfortable to ride. (Cheap bikes and BSOs are not worth upgrading parts)

In your case, in order to choose I'd say you must evaluate your habitual riding. If you ride on flat ground or with little slopes, or if you do not care about achieving high speed on flat, go for the 7 speed.

But if you want to overcome steep climbs and also have good speed on the flats, then you may need a bike with more gear ratios.

In my case, climbing out of the garage was only a nuisance, just part of getting the bike out. But using the bike for work and be able to climb steep hills, I really needed more gears. When I added then I was able to join some club rides that did went into the hills outside Lima, and they are indeed quite steep.

Nowadays I live in my home town, Tegucigalpa, a city so hilly that I would never use a 7x1. I commute on a 8x3 and can comfortably climb the steepest hills yet I do not run out of gears on flat. (A modern 10x1 or 11x1 has the range though, I ride with people that uses them, however those bikes are quite expensive)

If you want something that will make it "easier" to get up hills, you need to consider the gear ratios on your current bike and the Treadwell.

The following picture is from the Cannondale's website for the Treadwell. I have highlighted the gears which the Treadwell uses. The big ring up front (aka chainring) has 38 teeth, while the rings in the back (aka cogs) range in size from 11 teeth to 34 teeth. If you were going up a hill on the Treadwell, you would want to use the largest cog on the back (which is 34). 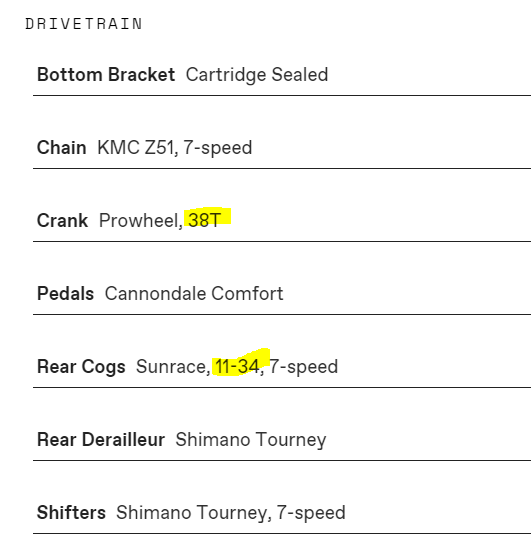 Now we can work out the gear ratios for the Treadwell. If we divide the number of teeth on the front ring by the number on the rear ring, we get the number of times the rear wheel will turn every time you do a complete rotation of the pedals. Using the 34 cog in the back...

The lower the ratio, the "easier" it is to get up hills.

Always remember: regardless of whether you are trying to find the highest gear ratio or the lowest, the front ring gets divided by the rear ring. The formula is always front/rear.

But I suspect you are not using the gears properly, and this is why it feel heavy.

The nice guy in the shop is trying to make a sale. :D

If he wants a sale ask him for a lighter version of your bike or an electric assisted one.

Not the answer you're looking for? Browse other questions tagged cannondale 7-speed or ask your own question.