What I've seen online says that it allows for lighter and stiffer cranksets becasue the axle can be a larger diameter. However, FSA sells BSA threaded outboard bearings compatible with BB386 EVO which has a 30mm axle. This leaves me wondering why press fit was even invented. Maybe it was invented so manufactures could sell us more stuff but even pros use it so there must be a decent reason.

bottom-bracket press-fit bsa
Share
Improve this question
asked May 1 '20 at 3:19

Carbon is the dominant frame material in performance bicycles. You can't thread carbon. There are two ways to get bottom bracket cups into a carbon frame: bond (industrial-strength glue) an alloy sleeve into the shell, or use a press-fit system. You are potentially adding several manufacturing steps by adding a threaded sleeve to a carbon frame, and the sleeve could be considered redundant material compared to a press fit interface.

It's commonly been stated that press fit BBs are cheaper for the bike manufacturers to produce, and this is consistent with the argument above. However, economic theory would suggest that in a competitive marketplace, consumers should see those savings. Also consider that we use press fit for headsets, and these have generally been trouble-free. That redundant interface might take up space that we might trade for enlarged (and thus more durable) bearings. Last, while I've repeatedly said that small amounts of weight make little difference in cycling performance, the fact is that weight is easily measured, and there are many weight weenies among performance cyclists. Purchasers have been sensitive to bike weights, and press fit systems are lighter because they use fewer parts.

(The argument above draws from the Youtube vids of Raoul Luescher, who has extensive experience in aerospace carbon manufacture and repairing, and who examines and repairs carbon bikes.)

The trouble with press fit

In practice, the main issue with press fit is the tolerances, i.e. some of them are oversized, and BB cups fit loosely, and they creak.

All components on bicycles have a specified dimension, and they have a variance around that dimension, e.g. PF30 shells from manufacturer X may have a mean diameter of (these are imaginary example numbers) 45.95 millimeters, with a variance of 0.5 millimeters. Tolerance may more properly refer to a set of engineering standards, which state the intended dimension and the allowed variance around this dimension. Refer to the below engineering diagram from FSA describing a BB 386EVO shell from this BikeRadar article (which is naturally about creaky press fit BBs): 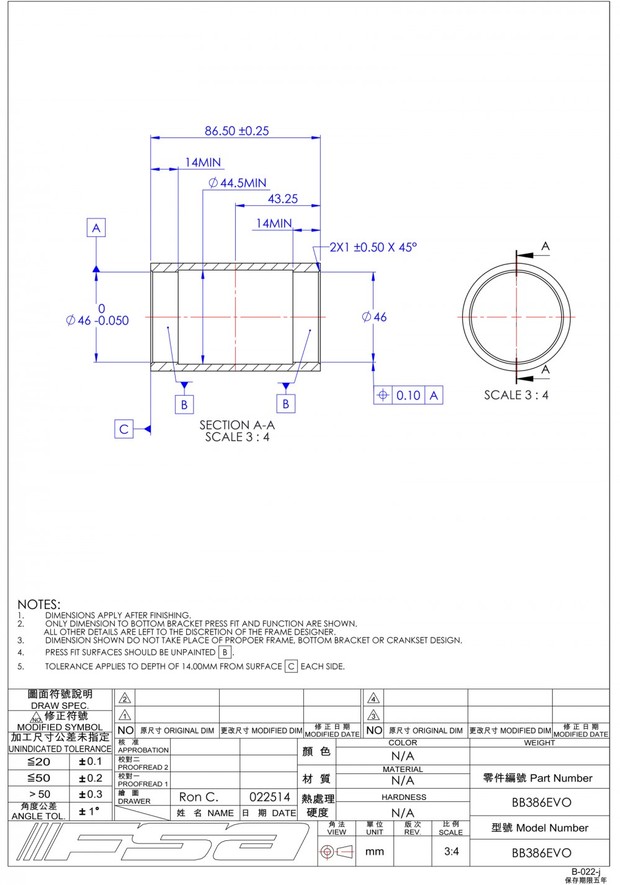 Continuing with the example above, I think the diagram says that this shell has a nominal width of 46.00mm, with an allowed tolerance of 0.05mm smaller and 0.00mm larger. (Recall that if the shell is slightly small, you can just press the cup harder into the shell and the material will deform slightly, but if the shell is too big, you get creaks.) I am not familiar with industrial quality control, but I would expect that both the factory and the bike company probably check (or perhaps they should be checking) the dimensions on a sample of frames in each batch. I supposed they would scrap individual frames that aren't in spec, and they may scrap the whole batch if there are enough out of spec frames. If the bike company is the one finding this issue, I would expect that they'd place some irate calls to the factory.

Whatever they should be doing, not all frame manufacturers have been able to maintain all their frames within the engineering tolerances. Recall that carbon frames are laid up by hand - workers lay several hundred sheets of pre-glued carbon fiber together in a mold, then the mold gets heated under pressure. This process may be inherently more variable than, for example, forging or CNC machining metal parts. This has led many to be skeptical of press fit in general. I am willing to take Luescher's argument that press fit is theoretically better than threaded, but he does acknowledge that in practice it is not.

One other possible issue with press fit BBs is that you often have to replace the bearings. It is not ideal to repeatedly press in and press out the cups from the frame, as this will wear the surface. We do not have this issue with headsets, because we very rarely remove and reinstall them. In contrast, BBs are subject to much greater forces than headset bearings. BBs are probably subject to more contamination, not least because they are lower and in the path of spray from wet roads. In some BBs, you can remove the bearings independent of the cups, or the bearings may be designed to have their seals removed and replaced (e.g. Chris King designs a little gap in their seals and they explicitly instruct annual regreasing). You can't do this with all BBs, and you would need to replace the entire unit, cups and all. On some press fit designs, this is compounded by the fact that the design places greater stress on the bearings, thus shortening their expected lifetime. For example, PF30 has relatively narrow spaced bearings.

There are post-hoc fixes, and they are unsatisfactory

The thread-together type of BB the OP described is a partial solution to BBs that creak because they fit too loosely (i.e. the shell is too big). Another partial fix has been to add retaining compound when installing the BB. These fundamentally won't fit a BB shell that's too far out of spec.

For press fit to work, the factories need to achieve better tolerances. I would guess that this is possible, but these should raise the prices of the frames. I suspect the increases might not be very large, but I don't have industry experience, and it might be more complicated than that. Also, consumers may be price sensitive enough that even a small increase would dissuade them from buying a bike.

Regardless, if you read between the lines of this Cyclingtips review of the Factor Ostro VAM and the comments, you'll see some statements from Rob Gitelis, the owner of Factor. Factor actually owns its factories in Taiwan, and makes bikes for other companies as well. Gitelis seems to imply that he could achieve the necessary tolerances with press fit, but Factor chose to use a variant of an existing threaded standard (discussed below) due to market pressure. Gitelis claims the threaded interface adds 30g of weight to the frame.

The rise of threaded BBs

For readers who are generally interested in the topic of alternative BB specifications, this Cyclingtips podcast interviews some of the framebuilders who proposed the T47 oversized threaded BB standard. It is mainly used by small framebuilders, but Trek appears to be moving its lineup of carbon bikes to T47 BBs. Factor did this with its latest bike, linked above. Specialized appears to be moving to a threaded standard, which I believe is actually the reliable old BSA standard (NB: you can fit a crank with a 30mm spindle in a BSA shell, and BBs are increasingly available). An interesting side note: a metal PF30 frame can be threaded to the T47 standard, although this task is likely to be beyond the capabilities of an average bike shop. Although T47 shares many of PF30s dimensions, PF30 bearings sit inside the frame, but T47 bearings are placed outside the shell. Thus, they are more widely spaced than PF30 bearings.

This article by James Raison on Lavelocita.cc discusses the practice of facing carbon frames - that is, removing excess material on the surfaces that interface with other components so that they're in spec, e.g. making the disc brake mounts totally flat, enlarging a BB that is much to small, or aligning the BB and headset surfaces if they are misaligned. If the surfaces were out of spec, this can cause reduced bearing life or brake noise. Note that if the issue is that the BB shell was made too big, facing won't do a thing, because a bike store can't simply add material to the shell.

Because I have already digressed, here's another article by the same author on the practice of facing metal frames - yes, their bottom brackets could also creak, although in that case you could face the shells more easily than on carbon, or you could chase the threads if you damaged them. In general, facing is a very labor-intensive process that requires specialized tools, and few shops do it. However, many frames come out from the factory slightly out of spec, so it would be ideal to have your frame faced. The shop Raison interviewed stated that both expensive and cheap frames seemed equally vulnerable to being out of spec (i.e. about the same proportion came in out of spec).

Threading holes is a process that has to happen during manufacturing. Both sides have to be concentric and parallel, and the taps used to make the threads have to be pretty good, so they wear fast.

By comparison, the bottom bracket holes on a carbon fibre frame can be made in the layup process, and (in theory) should come out the right size without retouching. This doesn't seem to live up to the marketting hype, with press-fit being prone to squeaking and sometimes really short bearing life.

A PF BB of any flavour can have its BB pressed in less time than it takes a threadded BB to be installed, which also reduces build time, and time is money too.

As a rider, the only benefits are cost savings (if they get passed on) a decrease in overall weight, and the need to service one's BB more often. "Added Stiffness" is promised but rarely that much of an improvement.

The reason I have always heard justifying PF bearings vs outboard bearings is that PF bearings allow the frame to be wider and stiffer in the BB area without increasing the Q-factor of the bicycle. PF is also lighter because it does not require a metal threaded insert.

With threaded bearings the actual bearings first have to be pressed into the threaded aluminum cups. They are then screwed into the frame. This is quite unusual, usually bearings are directly pressed into wherever they are needed.

However, for metal frames this is more or less okay. You have the additional weight of the aluminium cups, with the advantage that they sit outside of the frame and therefore provide better support for the crank spindle. It’s also easy to change the bearings.

However, for carbon frames it’s a disadvantage since you can’t really cut threads into a carbon frame. They have to bond a metal bottom bracket into the carbon frame just so you can screw the cups into it. It makes much more sense to just press the bearings directly into the frame.

Not the answer you're looking for? Browse other questions tagged bottom-bracket press-fit bsa or ask your own question.

1
What is the difference between a threaded bottom bracket and one with press-fit bearings?