What’s wrong with the bike

Daniel is right - it sounds like the mechanism in the back that allows coasting, has failed. This means the chain is driving the cogs forward, but there's no connection between the cogs and the hub of the rear wheel.

There are no good fixes short of replacing the rear freewheel or freehub, depending on what the bike has now. A deep clean and relube can help, but it may not, and even if things improve they soon deteriorate again.

To test this, take the back wheel out of the bike, and rotate the cogs by hand. Yours will probably turn both ways, when they should only turn anti-clockwise. When you try to spin the cogs clockwise, they should not move at all.

The replacement you need will depend on what you have. Either show us a photo of the cogs when the wheel is out of the bike, or just take it to a LBS and ask for a new freewheel. Its not a big job to fit to your wheel, but does take one or two special tools.

I've hat that kind of failure with freewheels with two different causes.

What is happening is that the ratcheting mechanism is failing to engage. In the freewheels that I have disassembed, the inside of the cogs have some "ramps" and the center of the wheel has pawls that engage with the ramps when rotating in one direction but slip when rotating in the opposite direction. 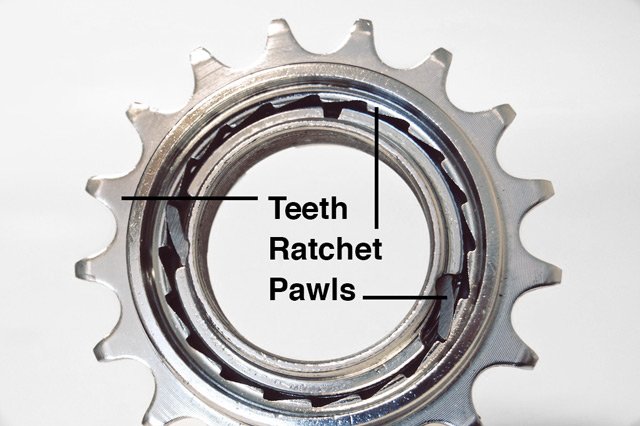 In my case I've had the freewheel fail suddenly and under load. That is the pawls break so they no longer engage. This rarely can be repaired because the pawls cannot be obtained as a spare. I was able to recover some from previously broken freewheels. (I only had access to really cheap freewheels so I broke 2 or 3 per year)

The permanent solution was to disassemble, clean, re-lube and reassembly. This however was a time consuming task requiring some solvents, a pan and a brush (I Improvised the way to unscrew the freewheel retainer). The time consuming part was the tiny, loose ball bearings. Had to fish then out of the dirty grease, and improvise a way of holding them in place while putting it all together. A freewheel commonly has two bearings, one per side.

At the time I was just a teenager so I hat a lot of available time and just used what was around the house, so I lubed it with automotive gear oil and this time it lasted a long time before another pawl broke.

In conclusion the solution may be to change the freewheel. They are not expensive and usually available in a range of quality levels. They are normally threaded on the hub so no special tool is required for installation but it is required for removal of the old one. (I used to get around that by disassembly of the freewheel until only the center piece remained, gripped it on a bench vise and rotated the wheel counter clock wise. Yes, it damaged or destroyed the center piece)

The removal tool looks something like this: (Depending on the freeweel type) 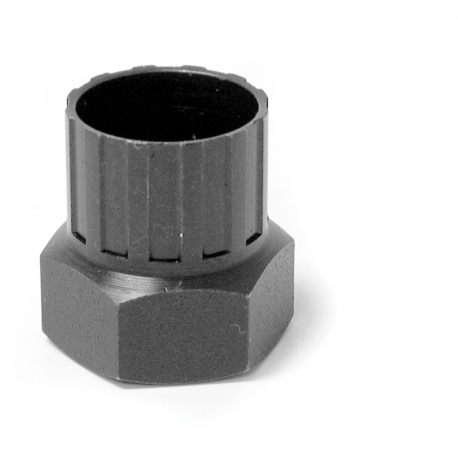 In this case it is the same tool used to remove a Shimano cassette lockring.

With the use of the correct tool, replacing the freewheel takes no longer than 5 minutes (if nothing is stuck).

All of this can happen to a freehub, but I've never had to open one. In a freehub the ratcheting mechanism is not in the cog set, but inside the right side of the hub.

Not the answer you're looking for? Browse other questions tagged road-bike or ask your own question.

4
Back wheel skidding out
4
What are the possible upgrades for a 40-year-old Bottecchia 10 Speed?
0
"Clacking" noise coming from drivetrain
3
Weird gear ratio for a couple of seconds after crash
2
What is wrong with my Shimano 105 5800 front derailleur?
2
Road bike very twitchy when standing in the pedals?
5
Restoring a steel Japanese bike from the early 80s
2
I think I bought the wrong bike
33
I am a beginner to commuting by bike and I find it very tiring. Is it my fitness level or my single-speed bicycle?