How is the finishing stage of truing a laced wheel improved by adjusting spokes in groups of 4?

The finishing stage of truing a laced wheel usually consists of fine lateral adjustments yet those meant to remove the last perceptible errors often create almost equal errors elsewhere on the rim. These new errors include both tracking and spoke-tension inconsistencies, even when spoke twisting has been scrupulously avoided and the rim /spokes have been reconditioned by overstressing and relaxing them after each adjustment.

This can be frustrating even if spokes are adjusted in left-side / right-side pairs as suggested in the section Lateral Truing on page 102 of The Bicycle Wheel, Third Edition, by Jobst Brandt.

Lateral Truing
· · ·
To correct a lateral error, tighten spokes in the error zone from one flange and loosen ones from the opposite flange. If the wobble is to the right, loosen the spokes on the right and tighten those on the left.

Some bicycle mechanics minimize fine-tuning surprises by adjusting spokes in groups of four.

How is the finishing stage of truing a laced wheel improved by adjusting spokes in groups of four rather than in pairs?

(This is a leading question and as such has been answered by its poster. Feel free to improve that answer or add another.)

Note: This pertains to laced, not radially spoked, wheels because a radial spoke applies no torque to its hub.

When truing a laced wheel, adjusting spokes in groups of 4 eliminates distortional side effects that would otherwise be relayed by hub torque to all other spokes.

Hub torque is a turning force between hub and rim, generally recognized in two main forms where the rim has a tire that contacts the road.

This is explained in The Bicycle Wheel, Third Edition, by Jobst Brandt, beginning with the section Torsional Loads on page 22. Three pages later, Figure 11 exaggeratedly displays a typical complex of rim distortions produced by hub torque as half of the spokes experience increased tension while the other half experience relaxation. 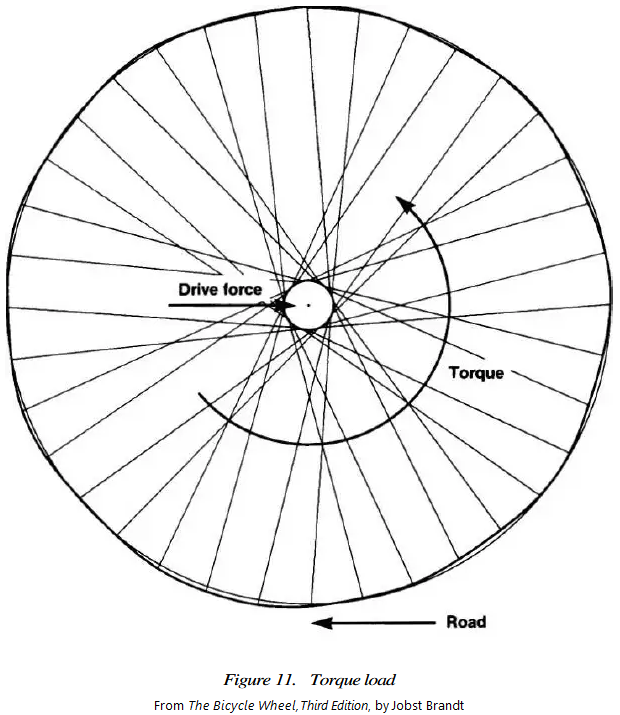 The converse is also true: spokes’ tensions transmit torque from rim to hub. Although a wheel being trued has no road to fight against, its hub is nonetheless torqued relative to the rim, by each and every spoke.

Spokes are commonly adjusted in rim-adjacent pairs so that lateral or radial corrections do not become, respectively, radial or lateral distortions. This works well near such a pair spokes but the adjustment often changes their combined hub torque enough to distort the rim elsewhere. One example is a lateral rim adjustment made by tightening one spoke while loosening its neighbor. 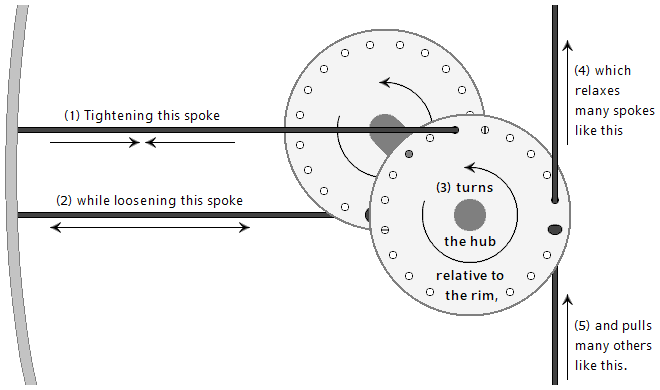 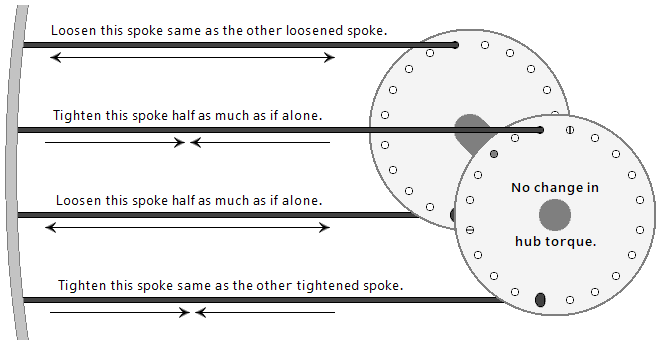 As spokes that are two holes apart on the rim connect to symmetrically placed holes on the same flange, equal adjustment of those spokes produces no combined change in rim torque. Adjusting each spoke in this 4-wise group half as much as its corresponding spoke in the pairwise adjustment produces the originally intended rim correction, as would be hoped, but without creating new errors elsewhere.

Not the answer you're looking for? Browse other questions tagged wheel-truing or ask your own question.

4
Should I seriously consider radial lacing?

4
Tips for radial wheel truing
1
Truing rear wheel with gears cassette
13
Why offset the rear rim to the hub and not the hub in the frame?
7
Should an amateur attempt truing a wheel
8
Danger of adjusting spokes on the road
1
What mistake might I have made while truing this wheel?
2
Wheel tru, bearing & cones tight but still WOBBLES
1
What should I do about a tensioned/trued wheel that lost significant spoke tension after first use?
2
Loose spokes after truing a wheel
5
Does bicycle rim wear affect wheel truing?