This is the first bike build I've attempted, so far the process has been pretty difficult but I'm especially struggling with the Bottom Bracket installation.

Firstly, I have a frame with a threaded BB shell, so I bought a threaded bottom bracket, like this one: Threaded Borrom Bracket. This went horribly though, I wasn't sure what to expect in terms of force when screwing it in, I think I ended up with it misaligned and forced it, destroying the threads on my new frame in the process...

To work around that, I bought a BB that doesn't engage with the threads on the frame but threads together instead. Here it is: Bottom bracket number 2.

I have 2x 16 notch tools I can use for installation (1 to hold the other side) but I can't even get it in the shell all the way. 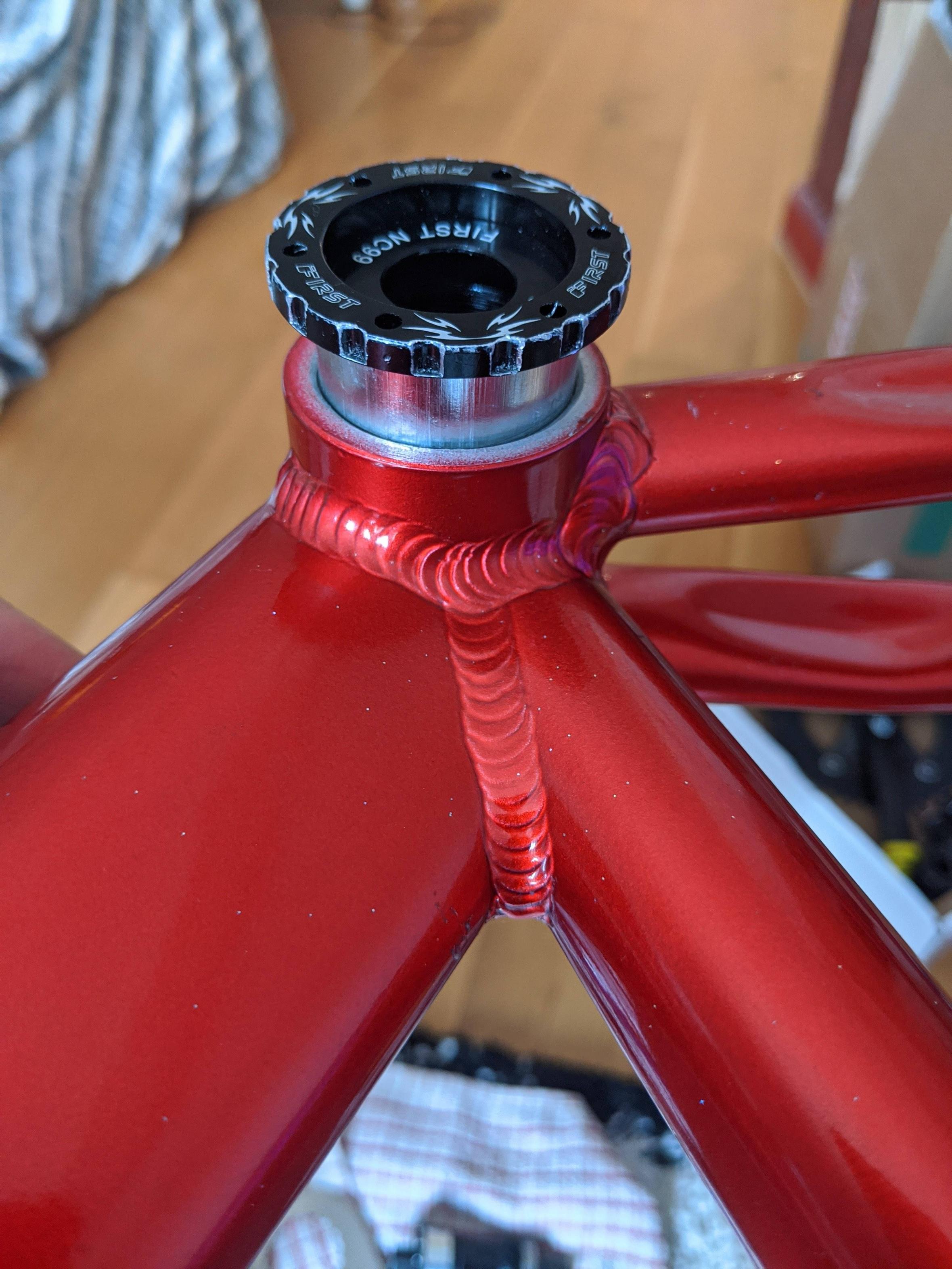 Do I need something to press it in, or is this just a case of my second bottom bracket being not suitable for a frame with a threaded shell?

Any help with this would be appreciated, despite a lot of niggly issues and incorrect part selection on my part, I'm quite enjoying the whole process.

Here's an extra picture of the empty shell which is threaded (well, crossthreaded now...) 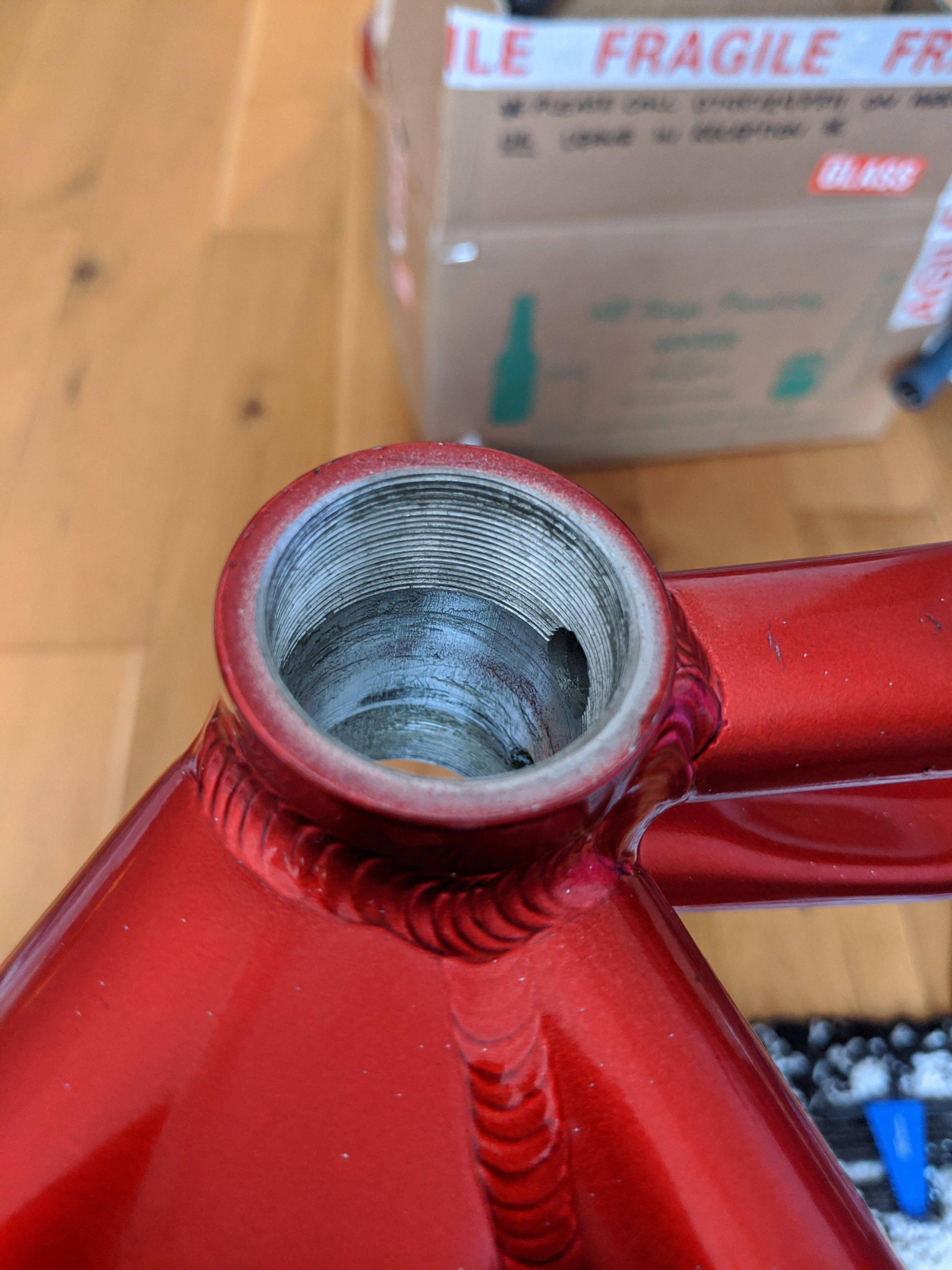 Each side of the BB is fitted with a silver notched cup, that I can remove. If I take this off, the BB does fit into the shell and I can thread it into the other half. I just can't seem to get it tight enough to stop the BB from spinning in the shell. 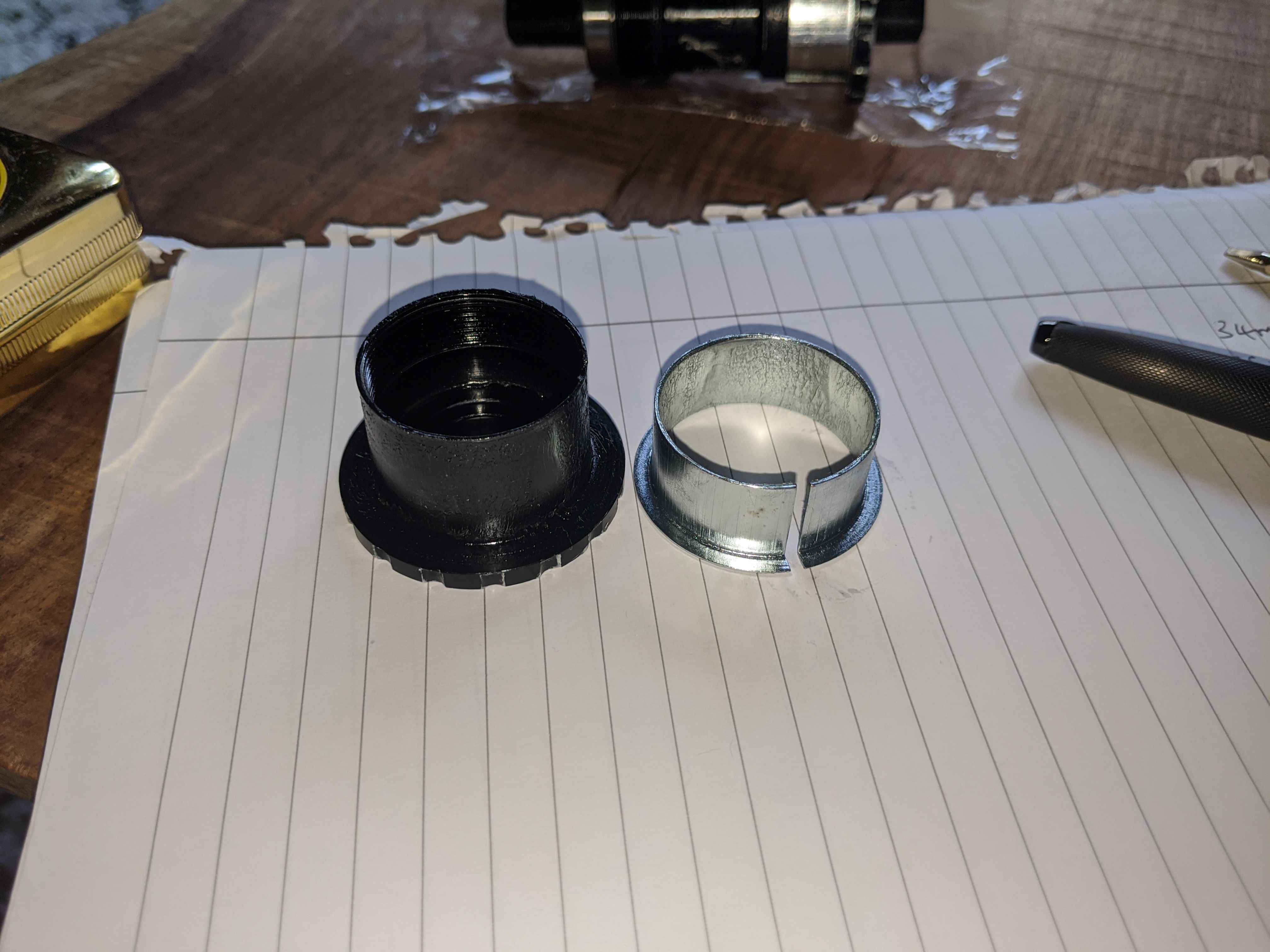 I also noticed that when I full tighten the BB, the square pegs won't spin anymore.

As requested in the comments, here is a close up of the original threaded bottom bracket I purchased originally (Link at the top) and a picture of the side of the shell that it won't screw into. It looks very neatly cross threaded to me, I was really angry at myself for doing that... 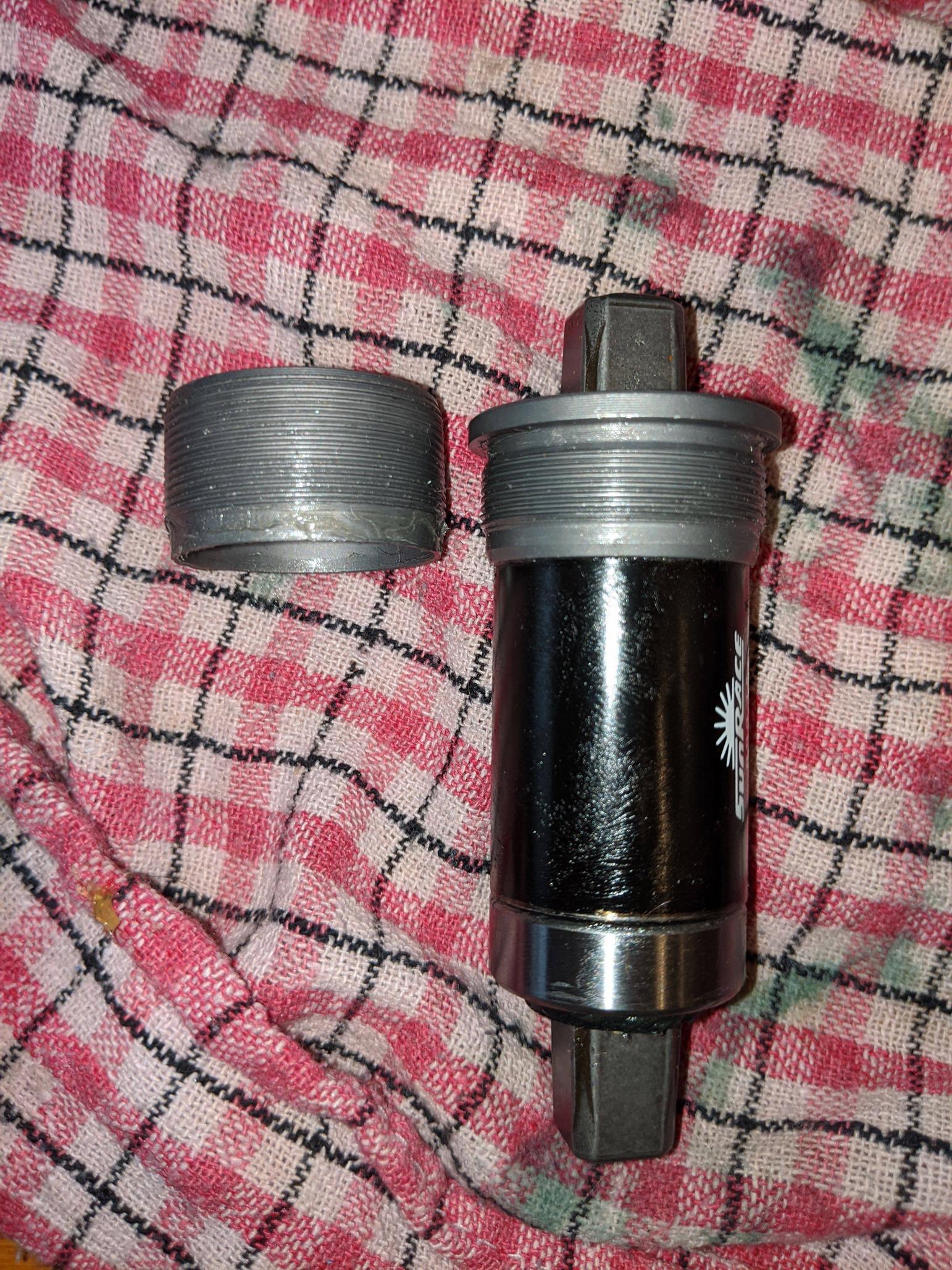 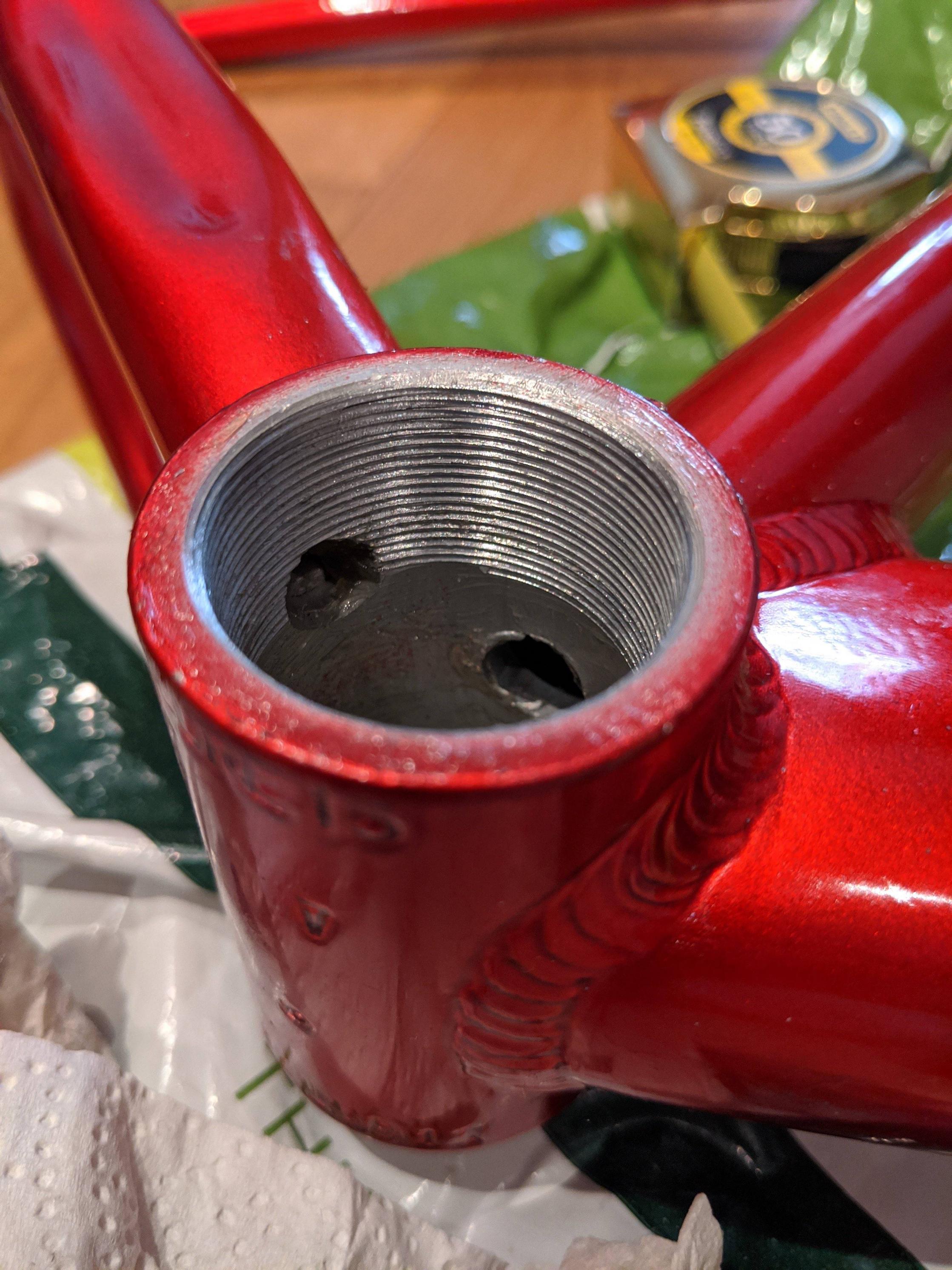 So I've managed to screw in the Tange BB, it actually went in 99% of the way by hand very easily. I tightened it with reasonable force at the end using a Torque wrench but I didn't want to over do it. I notice the non-drive side I can still see 1 thread but it doesn't seem to want to go in any further easily. The drive side is all the way in and flush to the shell. Does this look correct and as expected? I consulted a few video guides from ParkTool but not much was mentioned on expected "flushness" of the cup on that side. 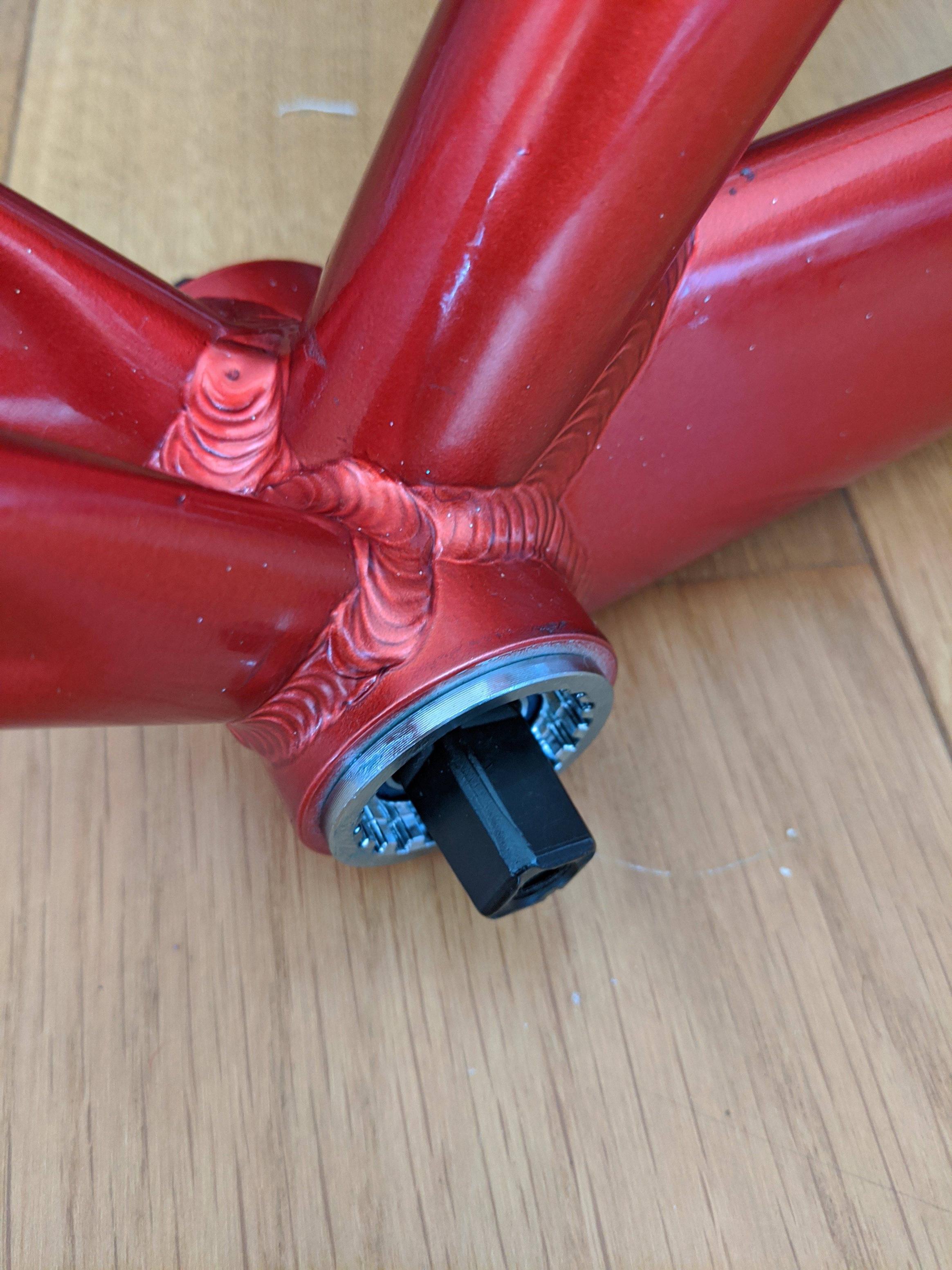 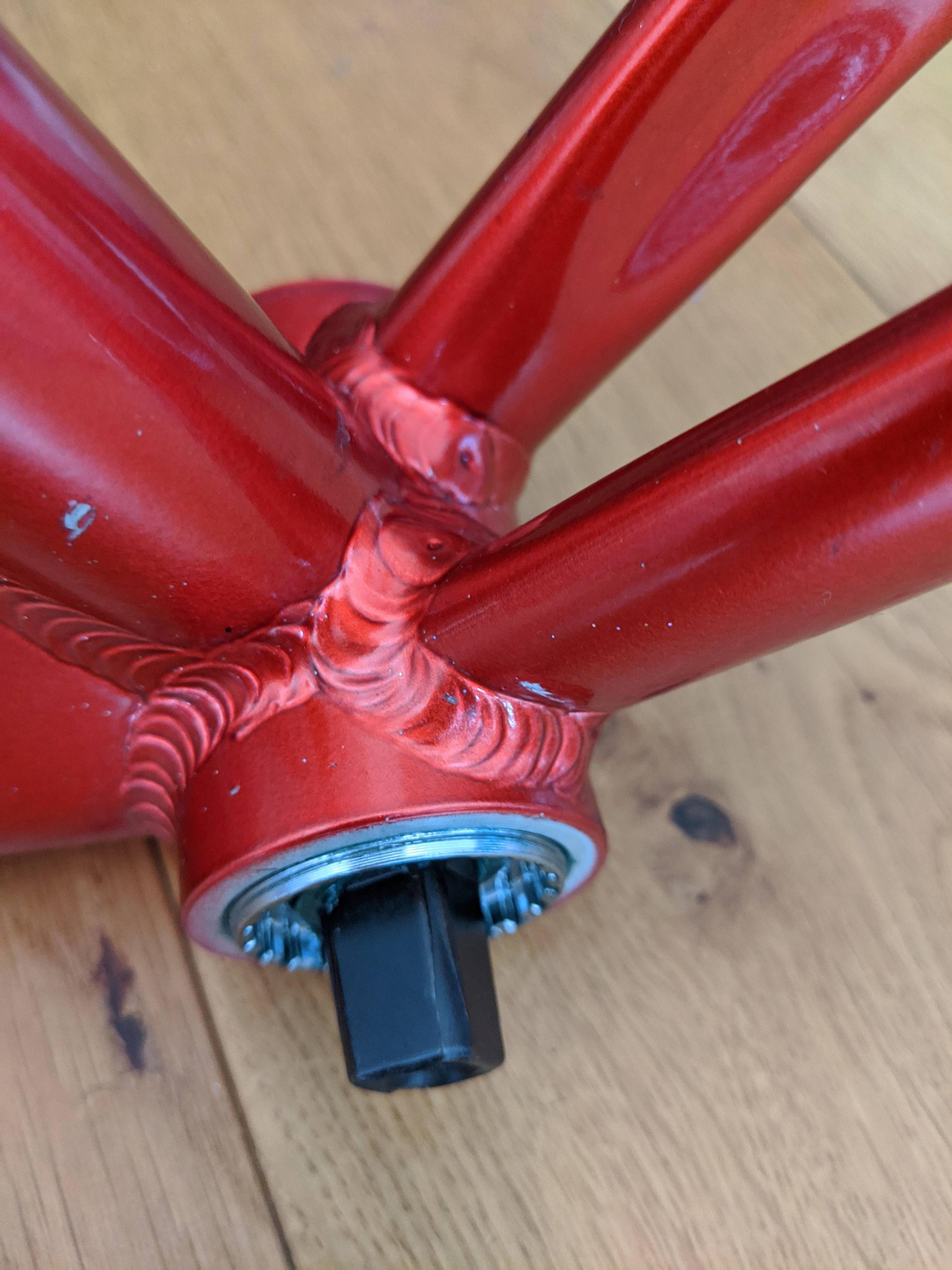 Threadless cartridge BBs have their place, and that place is where the threads are destroyed. Thankfully you're not there yet. They are a compromise because they tend to have creak issues sooner or later no matter what.

You should take the frame to a shop with a proper piloted BB tap set. One side of your shell looks fine. The fix is to install the pilot into that side all the way and use it to start the other side. At that point one can use some force to confidently get through the cross-threaded section. (One shouldn't necessarily go all the way through with the second tap without partially removing the first, because referencing one side to the other isn't really how the tools are intended to work, but that's a tangent.)

You have enough good thread in there remaining that things should be fine at that point. The risk is continuing to mess with it and starting to lose threads completely, which could happen from the spot you're in now.

In the scheme of things, bike bottom brackets use a fairly long section of very fine threads. Its pretty common for low end cartridges such as Sunrace to not get things right and have problems with starting rough, going in rough, etc. It may work fine after chasing the threads, but if it doesn't, there's a lot to be said for just getting a Shimano UN-55. It will go in right and last a ton longer, and they've gotten really cheap.

First up, there's no shame in getting a local bike shop to do this bit of assembly. Your frame is expensive and damaging the threads would be very bad.

Your frame is threaded - you need to use a threaded bottom bracket. The press-fit adapter you bought is not suitable for this bike.

The cartridge in your tea-towel photo is the correct unit to install.

You may encounter resistance at some points in the rotation due to damage in the threads. Go by feel and take your time. As long as the cartridge is not cross-threaded you'll be okay.

There's a time for finesse and a time for brute force.
BB installation is the art of knowing which to use, and when.

Your LBS would not be expensive, and you will protect your frame. I have deferred some really hard jobs to my LBS, purely because I don't have the tool or can't get it perfect.

Not the answer you're looking for? Browse other questions tagged bottom-bracket cross-thread or ask your own question.