How to interpret Strava power curves?

Check out the power curve at the bottom of the post, it's composed of two screen caps from the same ride, stacked on the same image:

Apparently on the ride in question the cyclist rode at:

What are these dips? How are we meant to interpret this data?

I would expect power curves to either be flat (usually a result of ERG mode on a trainer) or constantly falling as the time period increases.

I reached out to Strava and their facebook rep said it was 'complex' and to send in a query to the support email - they haven't replied.

I had a look here: What method or algorithm is used for computing Power Curve on Strava?

It's good info, but the example given there doesn't have a dip, and doesn't discuss it - but it does make make me think that the answer might just be what I'm trying to avoid suggesting... 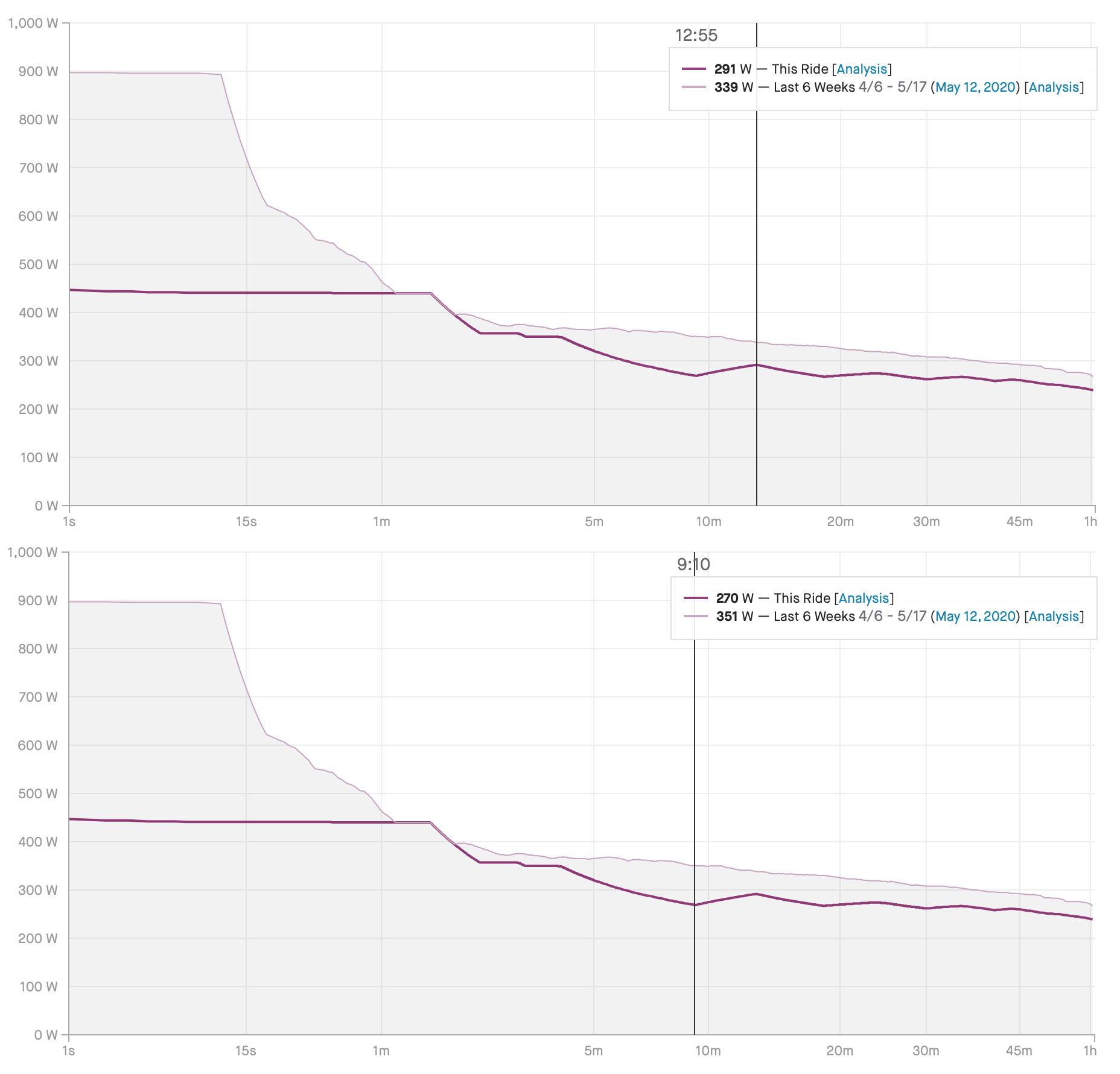 Addressing some of the comments:

At a casual glance I'll agree that power curves do show power plotted against time, but don't be mistaken in to thinking that they show instantaneous power over time.

Power curves show the maximum power a rider rode for a duration (averaged via various means, some algorithms more clunky than others), and as has been confirmed to my satisfaction they should be a 'monotonically decreasing function of duration' - but they're not on Strava, (which prompted my original query...)

Here is a visual example of how power curves are different from power with respect to time: 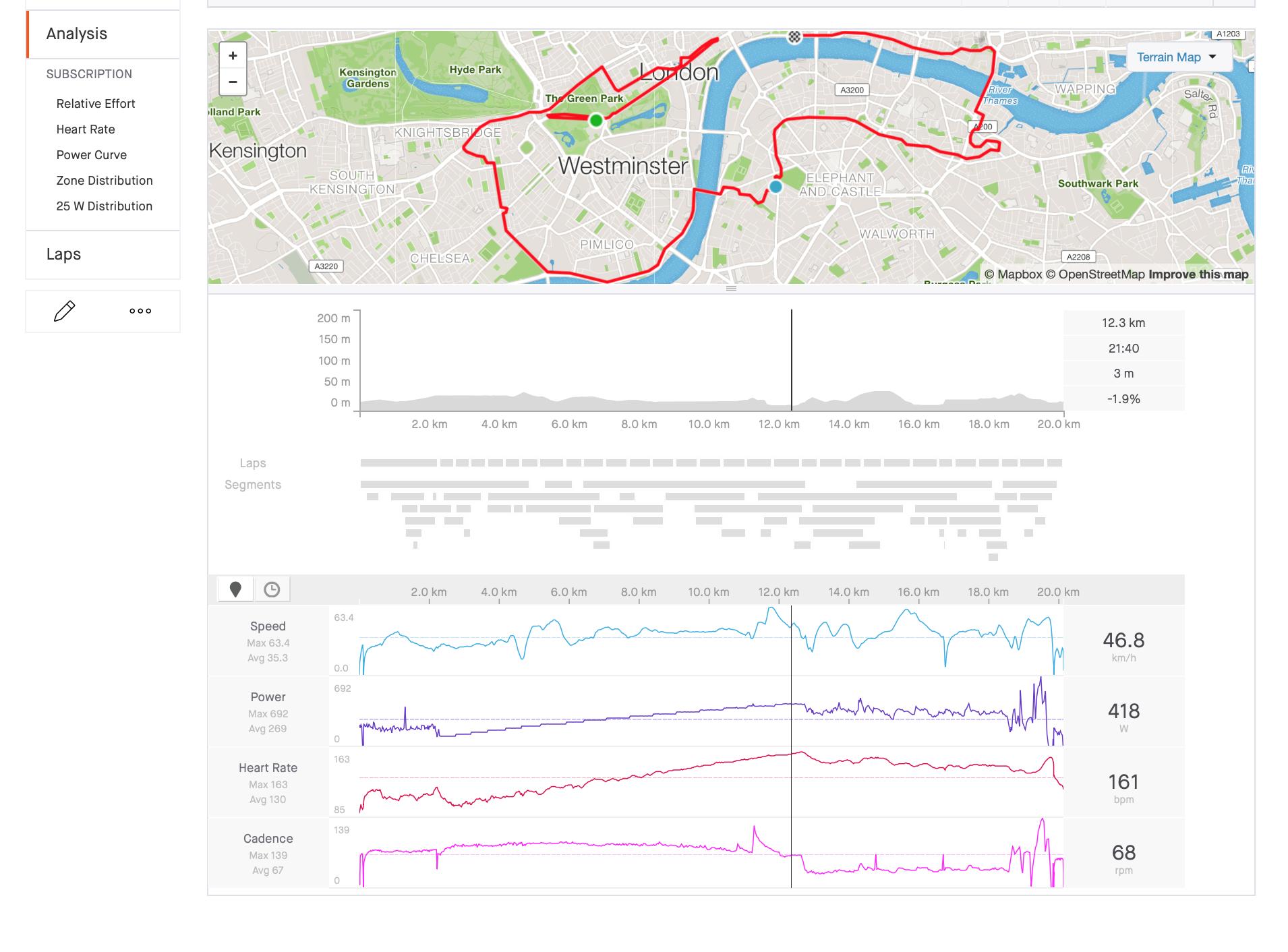 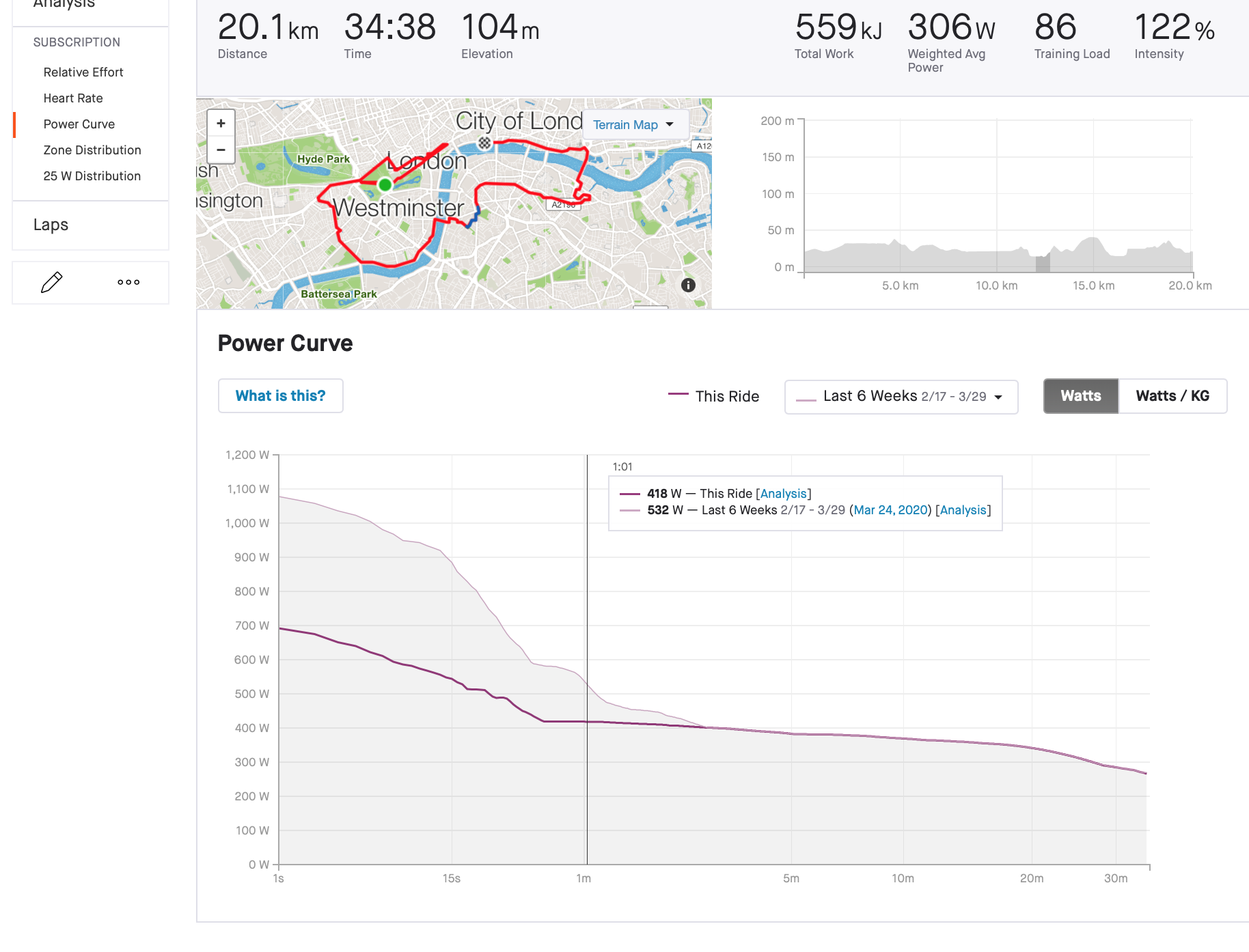 In general, you're right, the maximum mean power for a duration should be a monotonically decreasing function of duration. However, for any single ride, especially when you're doing intervals, the MMP for that ride needn't be monotonic.

Here's a simple (too simple) numerical example. Suppose you were doing repeated 5 minute intervals, with 5 minutes at 325 watts followed by a 5 minute recovery at half that, or 162 watts. If you were to calculate the MMP for a duration of 9:00, it would be 252 watts; the MMP for 13 minutes would be higher than that, at 262 watts. You didn't do an extended effort for either 9 or 13 minutes but that doesn't prevent the arithmetic of calculating an average power over 9 or 13 minutes. In your case, it appears that your workout was on an ergometer and involved at least one 1 minute interval at 450 watts. Depending on how long your work and recovery intervals were, and at what levels, you can see non-monotonic MMP curves.

Not the answer you're looking for? Browse other questions tagged power strava or ask your own question.

7
What method or algorithm is used for computing power curve on Strava?

1
Can I get my sprinting ability back?
1
How I can see who watched my Strava profile?
2
Estimating FTP from Strava analysis
2
Does Strava display live watts while biking?
7
What method or algorithm is used for computing power curve on Strava?
4
Understanding how to calculate critical power curves
0
How does Strava treat power data while resting?
4
Combining ride data from Wahoo & Fitbit, on Strava