What are the main differences in Giant's Toughroad and Revolt drop-bar bike series?

I'm at a bit of a loss trying to decide what sort of a (Giant) bike I should be looking towards.

Firstly, I'm looking at Giant because it's one of the few reputable companies that offers anything in my area that I'd feel comfortable going with—including one of the only ones that have at least a slightly relevant model for trying out.

I've been looking at the Giant's Revolt series, but the differences between the various options are not very well described by the company:

I tried a comparison on the Giant site, but it wasn't particularly helpful except for highlighting that the Toughroad SLR GX should be worse in nearly every category. It helps to know that the technologies marketed below in the Giant comparison table relate to bike construction techniques. 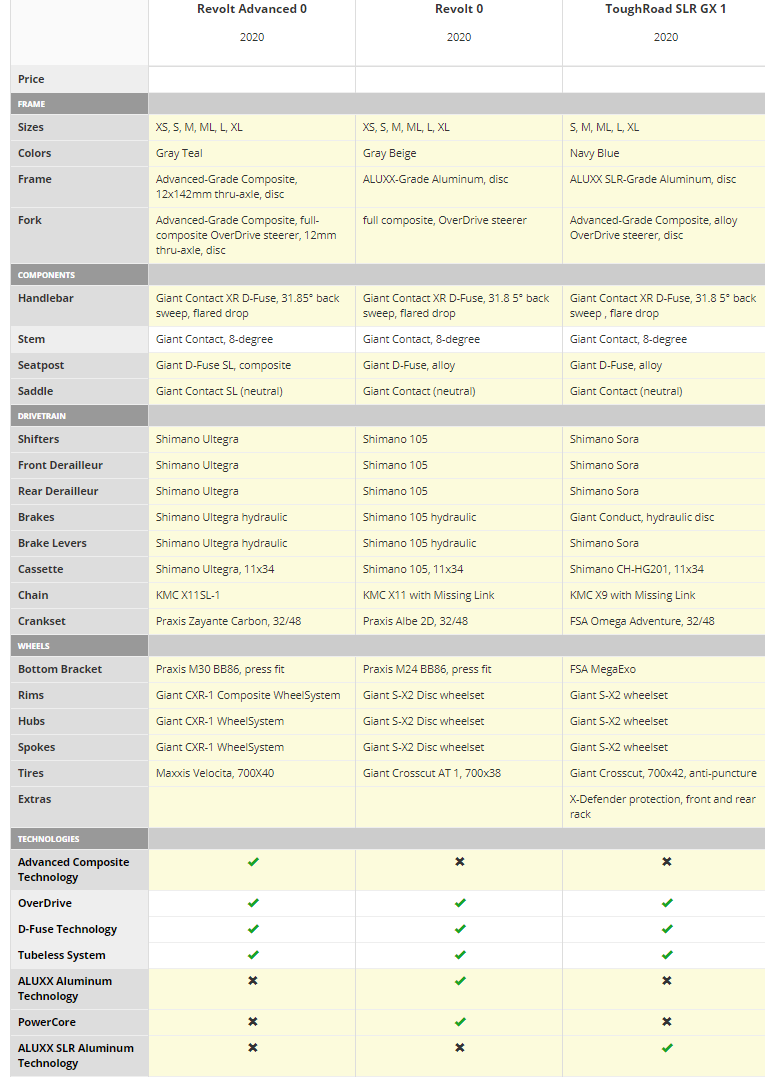 Though the Toughroad SLR GX isn't marketed under the "Gravel" category, the description mentions relatively poor road conditions, and in the shop I went to, it was described as the "lower level Revolt". Some other companies (Kona and Bianchi) don't make such a Gravel/Adventure distinction.

road.cc lists the Revolt 2020 model as one of its "best gravel & adventure bikes" while bicycling.com goes out of its way to make clear that the Revolt Advanced is not a touring bike (which to my ears is synonymous to adventure/gravel). Instead, bicycling.com recommends a non-drop bar Toughroad SLR as a touring bike (and even one of its best)—which makes no sense to me. Meanwhile, Specialized Sequoia Elite which is described in this review as "Gravel" (but coming out worse than Giant's Revolt Advanced) is marketed as a "touring rig" by Specialized so there's some overlap here.

I've now also received the specifications for the Giant 2021 range:

How important are the differences between these Giant's adventure/gravel drop-bar series'? Are any of these more suitable by their configuration for specific usages (e.g., racing, touring, forest-riding, etc)?

Please note that answers which say "Go out and try them all" are extremely unhelpful in today's climate where a) many bike shops have been bought empty (e.g., Pelago everywhere), and b) some shops don't offer options for trying bikes in any case (e.g., Kona in my area). I was able to try a Giant Toughroad SLR GX for about 10 minutes, but that doesn't tell me how it would feel going for the 100th (nor the 20th...) kilometre.

All the various component specifications don't address that at all. You need to look at frame geometry.

If by "better posture" you mean "more upright", in general between two very similar bicycle frames the frame with the taller headtube, shorter reach, and more upright seat tube will give a more upright posture. And a longer wheelbase and more trail will give a more stable but less responsive ride that is likely to be less taxing on long rides.

Even then there's likely to be a huge overlap of possible positions that you can achieve on two close-but-not-quite-the-same frames. Saddle positions are usually variable up-and-down by at least 10 to 20 cm and fore-and-aft by 5 to 10 cm. Handlebar positions can usually be varied up-and-down about 10 to 20 cm and fore-and-aft by 5 to 8 cm. That amount of saddle and bar variation is usually enough to change any bike from a "comfortable" touring-style posture to an aggressive racing posture, within some limits. There might not be enough reach or the head tube may be too tall, for example, to get into a full back-flat race posture. Or the reach may be too great to allow for a real upright posture.

Regarding the level of components? IMO anything higher than 105 is overkill and only worth riding if someone else is paying for it.

I think you are confused about the frame 'technologies' that Giant offers. More boxes checked does not mean a better frame, the choices are mutually exclusive. 'Advanced Composite' means a carbon fiber composite (CFC) frame. 'ALUXX' means an aluminium alloy frame. CFC frames are generally held to be superior to alloy ones.

I'll give you that the 'SL' and SLR postfixes are confusing, intuitively they would appears to indicate a progressively higher grade of either CFC or alloy construction, but the lowest spec bike has the SLR tag.

The 'gravel', and 'adventure' adjectives don't mean much. Asking who are these bikes are for is a kind of meaningless question. What you should do is find stores that have the bikes you are interested in, sit on the bikes and do some test rides. Figure out which gives you the riding position, ride and handling you are looking for, then decide how much money you want to spend and which level in the range you want to get.

A lot of the difference is in the components, and therefore price. Sora/105/Ultegra drivetrains will make a big difference to their costs, as will the brakes (in-house/105/Ultegra), tyres and cranks (the highest spec has carbon cranks).

So much of it is how much you're prepared to pay. The more expensive components will be lighter of course.

Looking at the geometry of a couple of models the Toughroad has a longer wheelbase than the Revolt Advanced. Almost all of this is in the chainstay length, meaning more heel clearance for panniers, important if like me you've got big feet and long cranks (long legs). One of the biggest differences will be the handling though: the Revolt Advanced has more rake and less trail on the forks (the headtube angle is the same for a given size). According to this article that means quicker steering on the Revolt Advanced, or more stable on the Toughroad. This is where test rides will most demonstrate the difference, as the cockpit geometry is within a few mm.

1
Extend drop bars with additional positions
3
What type of terrain makes an MTB mandatory?
0
Expanding the range of capabilities of a gravel bike
2
Deore Derailleur w/ Tiagra STI Shifter Compatibility
6
Which Type of Bike Would You Select If You Needed To Commute, Ride Fire Roads, and Regular Roads With 1 Bike?
2
Recommendations for 'upgrading' gravel bike with road tires?
2
Shimano Nexus 8 IGH : recommendation or changes in bike setup for high altitude ride