If you were to choose between a Hope Pro 4 hub and a DT Swiss 350 or 240, purely based on their freehub types, ie Hope's pawl system or DT's ratchet system, which would you choose and why?

The main question is, which system is better, and why?

Just to be clear, these are the two types 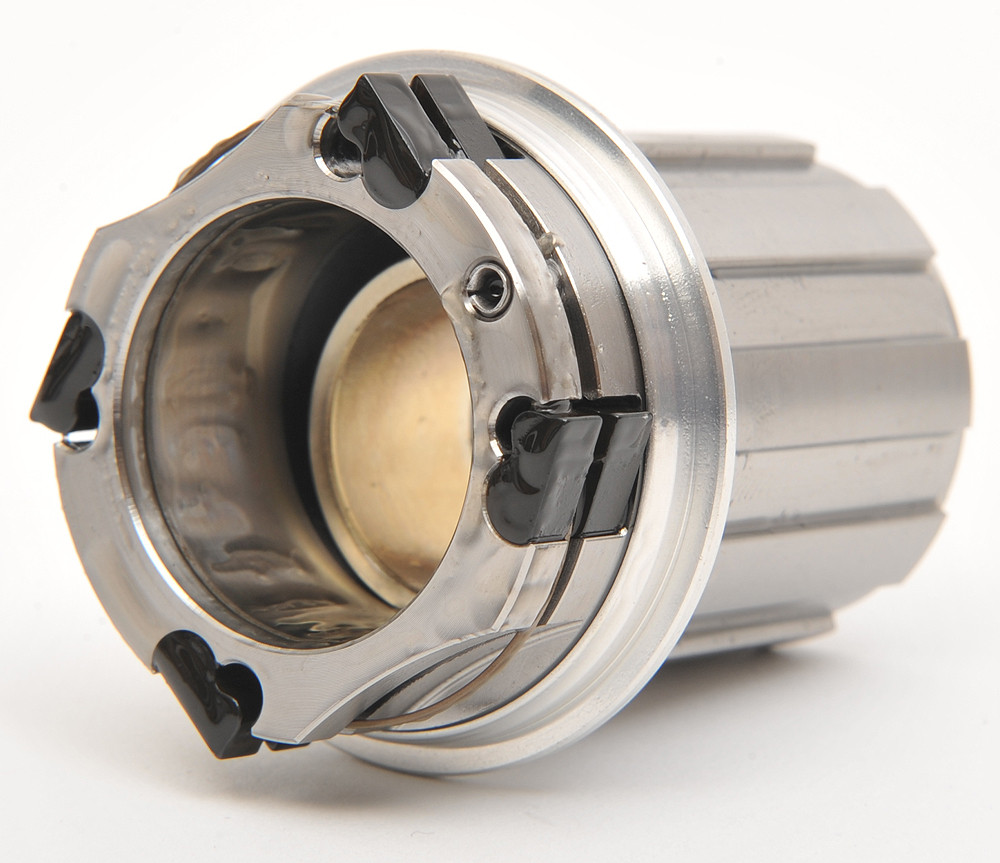 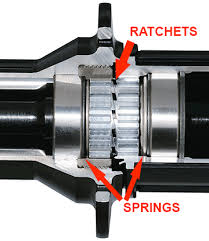 Hope hubs are a very refined, reliable execution of the pawl design. They don't do much to illustrate the disadvantages of the concept that designs like the star ratchet are trying to address.

One potential downfall of pawl systems like Hope uses is that when things go wrong with them, either the pawls or the part inside the hub shell that the pawls engage, which I'll heretofore call the "drive ring" as it's named by some manufacturers, can become damaged. Typically the drive ring is a hardened steel piece threaded into the shell. Some potential scenarios:

In either case, the teeth of either the pawls or drive ring can become chipped and deformed. At that point the problem can begin to build on itself. The teeth have to be sharp for the system to work as intended.

One thing about drive rings is that few manufacturers make them easy to replace if something does go wrong. When it is possible, either you need a new one plus a weird, expensive, proprietary tool that goes in and mates with the teeth, or in some cases you need to send your wheel in to the manufacturer. High-end aftermarket hubs and some wheelsets will typically give you one of those two options. Beyond that, neither option usually exists. You can find some high-dollar wheelsets where once the warranty period has elapsed, addressing a drive ring problem is difficult or impossible.

So while the drive ring is not technically a dynamic surface that's integral to the hub, in practice it might as well be in many cases, and my experience is they can be a little more damage-prone than people realize. Pawls and their hardware are typically more available, although sometimes they can only be replaced along with a new freehub body. And for older, lower end, or OEM hubs, they may be unobtainable.

More aggressive sealing and spring force are both design weapons against engagement issues on a pawl hub ever occurring. (Hope hubs take both pretty far). Reliability is increased at the expense of marginally increasing drag while coasting, the funny thing about coasting drag of course being that to a point, it's not a great concern in most riding disciplines where it's reasonable to split hairs about performance.

Systems like DT Star Ratchet and King Ring Drive, which I'm going to arbitrarily call "drive plate" designs, are trying to make partial engagement closer to being physically impossible, even with contamination and poor lubrication. Contact area is increased at every step of the torque transfer, and it's between two unified pieces, rather than separate pawls that are only as good at engaging all at once as their spring tensions are equal. Extant examples of drive plate hubs make all parts fairly easy to replace but very seldom need it, due to their efficacy at distributing load over more area. This quality is of heightened value in a hub one invests in with the intention of re-using indefinitely as rims wear out.

Pawl systems have an advantage at each approximate price point in the rate of engagement numbers they can obtain while still being reliable overall. At the high end, Industry 9 is a poster child, with ROE numbers down to 0.52°. Plate type systems have in contrast seemed to find their limit at 5-6° for a King or 240, presumably because their torque-transferring parts are smaller by necessity and so making the toothed/splined parts any smaller would sacrifice too much strength or otherwise become impractical.

Another way of looking at is that pawl and drive ring systems, and especially the highest performing ones, need to push everything to the limit in terms of materials, hardening, machining precision, matched spring tension, etc. The best ones are only the best because of how close they fly to the sun. Plate systems don't have that dynamic, but at least as far as what exists to date, they take a little hit on rate of engagement potential.

I personally feel that between the Pro 4 and 350 freehub, both are reliable but the star ratchet design gets there in a way that's more elegant and robust. But, the 8° ROE on the Pro 4 versus 18° for a stock 350 would be a reasonable deciding point. Different riders value ROE very differently, and for good reason.

Both work fine. Technical explanation would lead to endless debate between people who don't know what they are talking about, so I'll go for economical one instead.

The patent for DT style star ratchet expired in 2015 and Chris King ring drive in 2017. Unlike innovations such as cassette freehubs, threadless headsets or three piece cranksets, other manufacturers haven't rushed (1) to build these once patents expired or were worked around. This suggests that these mechanisms aren't a huge improvement over the common ratchet and pawl design. On the other hand, these designs have been manufactured and sold at premium prices profitably for 25 years, so they can't be significantly worse either.

(1) Zipp has introduced their own variant of star ratchet after the patents expired. They are the only one that I know of. This might point to the direction that some star ratchet benefits might be real but it is too expensive to manufacture for common use.

1) which one will have spare parts available in the future, should you need them? That's very hard to guess at this point. You might need to buy a new freehub to support a different sized cassette someday.

2) sound - some riders are all about the sound of their freehub as it coasts. It makes no difference to me cos I generally soft-pedal all the time, but some people like a loud clatter and some prefer a faster vizzz noise. This has no effect on function, but can be used in racecraft when trying to psych out other riders.

I would consider ease of maintenance a factor in your decision regardless of ratchet style. Obviously from the vast supply of information above, you get the idea that it is primarily a matter of taste and budget that will inform your final choice, as both styles have their strong points and weaknesses, but consider that I have to do routine cleanings of my Chris King hub using proprietary tools that were pricey, I think I recall paying around $160. I use my DT Swiss 350 hub on all the same trails, ride styles, etc, and I clean it less frequently, and even still it never diminishes in performance as it gets gunked up like my CK hub, and it doesn't require any tools to clean other than an old tooth brush and degreaser. The DT Swiss design is mechanically simpler and less expensive. I actually like how it performs better than the Chris King Classic. Most good brands float solid, quality equipment that works great when well maintained, but how mush hassle it takes to do so is a giant factor for me.

Not the answer you're looking for? Browse other questions tagged wheels hub rear-wheel freehub or ask your own question.