What bag should I buy first for my gravel-touring kind of bike?

I have bought a new bike, and I would like to start equipping it with bags, as I plan to do bicycle tours in the future. At the moment, however, I only do day tours, and I would like to buy a bag that would also serve me as a day pack. Basically, I would like it to be big enough to fit a couple of pieces of clothes, some snacks, my phone, and whatever else I might need for the day. I would like to have an easy access to all that stuff as well. What type of bags should I be looking at?

I was thinking about a handlebar bag, and was having a look at those. But I seem to come across three types of bags: 1. roll up bags with no easy access to contents 2. accessory bags that seem too small for my needs 3. large handlebar bags that seem to be more suited for city bikes. Is there a handle bar bag that could suite my needs? Or should I be looking at other types of bags?

My bike is a kind of gravel/touring type. It does not have a rack, but I think it is equipped with all the possible mounting points.

In case it makes a difference, here is a picture of it: 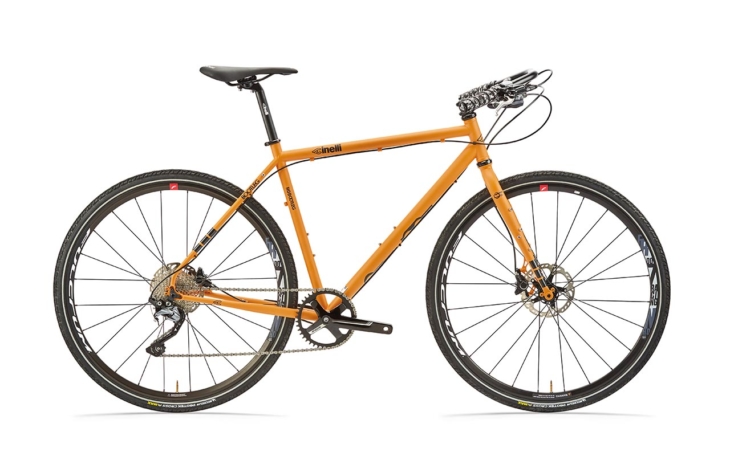 In contrast to the other answer, I suggest going straight for a large but compressible saddlebag. I have the largest topeak backloader (15 litres) but roll it down to about 1/3 of that for long day rides when I want to be self sufficient.

This will serve you well as you move towards multi day rides, while being immediately useful. It's also a good place to carry stuff from the point of view if bike handling and aerodynamics.

A small toptube bag (I just use cheap ebay ones) is good for your phone and any snacks you want without stopping.

As far as I’m aware handlebar bags are usually quite heavy, affect handling and can be hard to mount on road bike handlebars.

I try to avoid large bags, instead I use

If you need to carry more, a rear rack weighs 460g or less and is the best way to transport large and heavy cargo. Even if all you want to transport is a warm jacket a rear rack is probably better (handling, weight, doesn’t block bottle cages etc.) than frame bags or handlebar bags.

For one day you are often fine with your jersey pockets and a small saddle bag. If needing more I would: 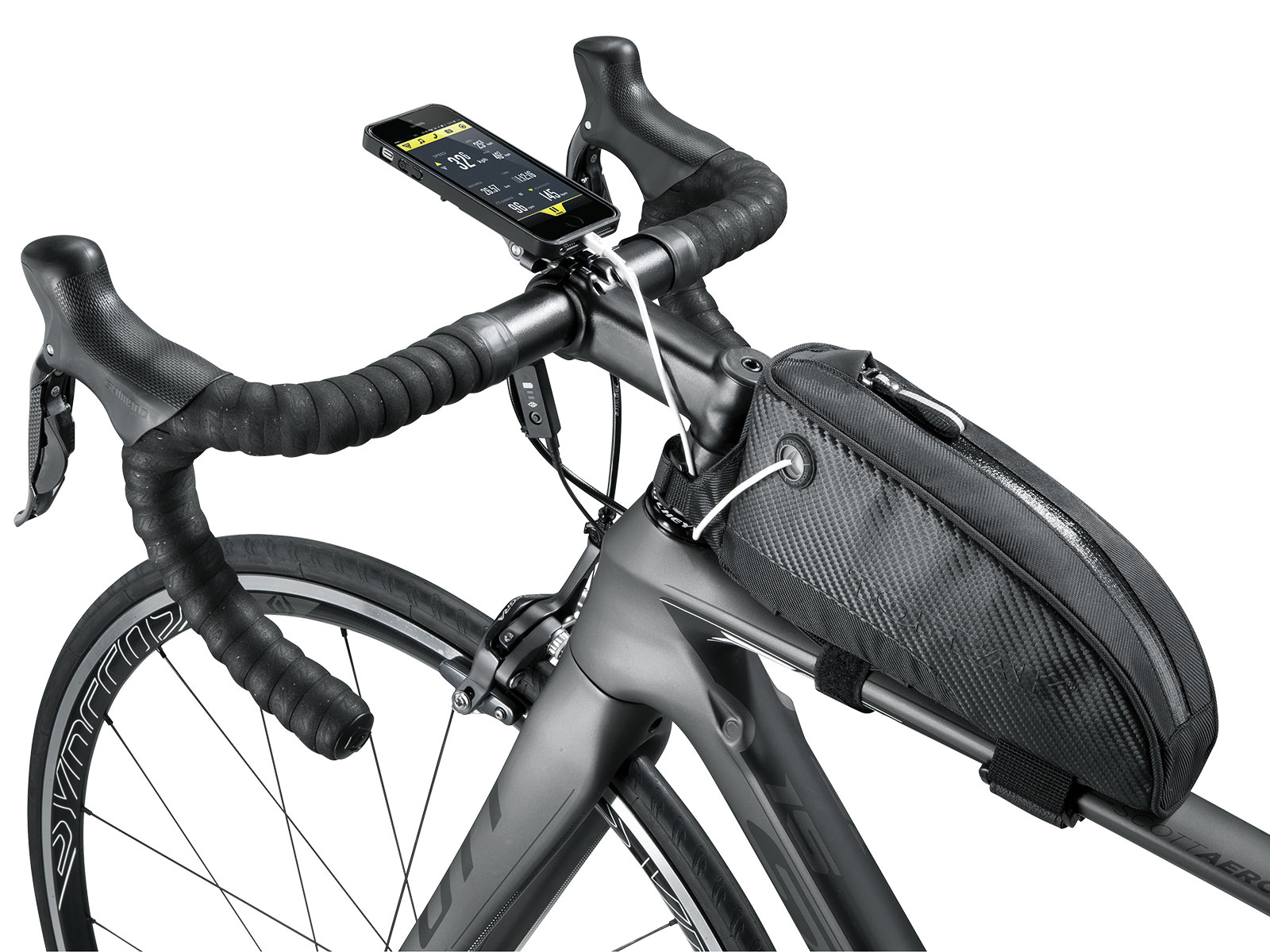 I would leave large saddlebags, handlebar bags, frame triangle bags and so on for serious touring. They can be awkward but have their place when you have to carry a lot of stuff.

The next bag for me to add would be a frame triangle bag, but only when needed. It is still stable, fixed in the frame and does not move. 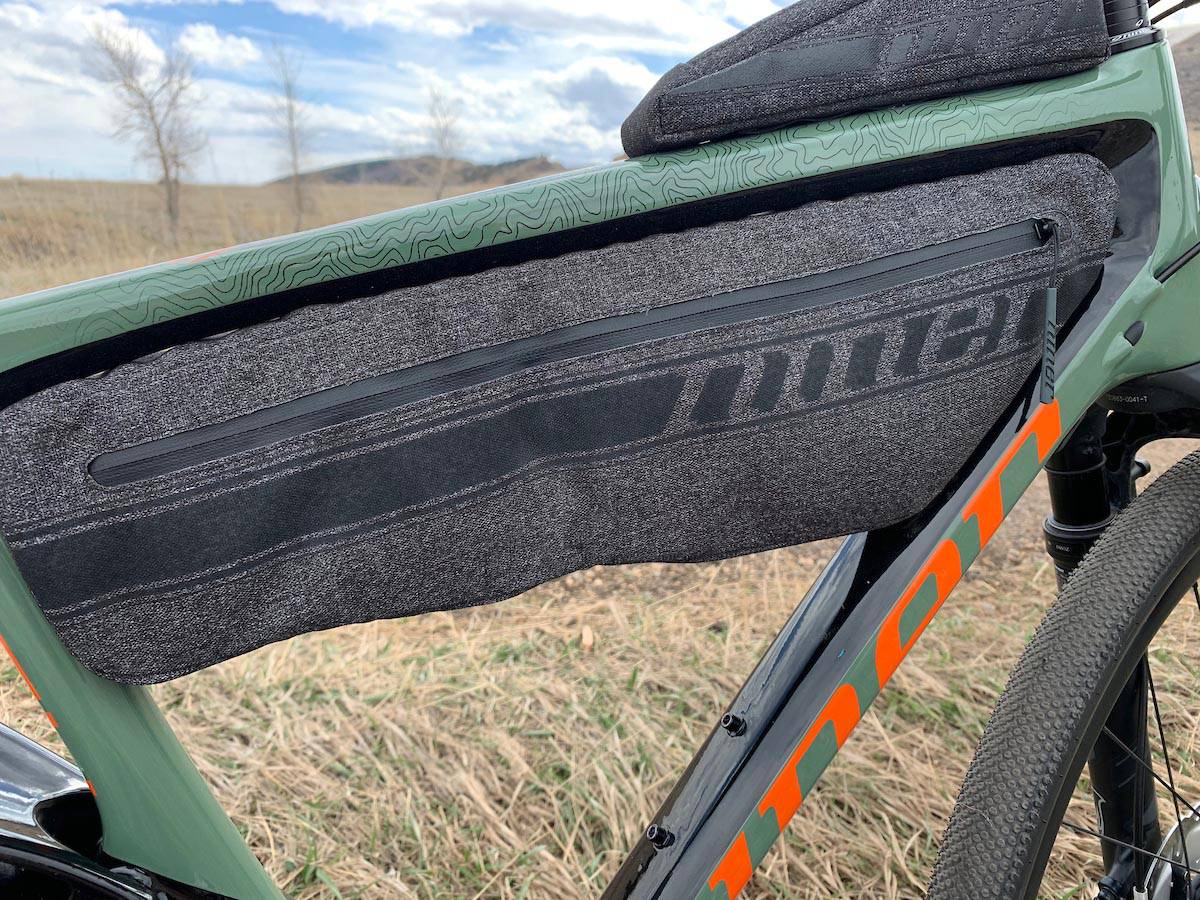 I see a lot of handlebar bags carried by tourists on their hybrid bikes that are popular here, but for me they spoil the handling characteristics of the bike, you have to fight the bag when turning and they can move during the ride and so on. For a more serious rider I would add them when you need more stuff, not for a day ride.

The frame triangle bags can cause interference with your legs, the friction may damage your lycra shorts (if prolonged), so I would also add them later when needing more space.

Although gravel bikes often do come with mounting points for racks/panniers, those are unpopular in modern bike-packing solutions where the preference is on carrying everything in the axis of the bike (not on sides) and the rear bag is mounted on the seat post.

I've tried fitting a handlebar bag to my racy road bike, and found it to significantly change the handling even when lightly loaded. It also interfered with the older style of gear cables which sweep through that space (this would be a non issue with more modern gear cables under the bartape or inside the bars.)

Gravel/touring bikes tend to be a lot more more "slack" in terms of front-end setup, so the effect should be less there too.

Do test your bags and make sure they can be returned/swapped if they're not working for you. Can you borrow any for some testing?

There is not a generic answer to this question, and the reason is that handlebar bags are the best in many regards, especially for day rides and light touring, but they do change the handling of the bike, as does anything that puts weight on the fork or bars. They work best on bikes that have front end geometry designed for them, specifically a low trail number.

This is a large subject, but a simple way of thinking about it is that loads in front of the steering axis slow down the handling of the bike. Low trail numbers speed up the handling of the bike. Combining a low trail front end with a front load can be made to result in handling that's neutral, allows easy corrections in cornering, and is easy to handle while fatigued. Unloaded, such bikes are manageable but a little squirrely, and that is the only real disadvantage of the concept. A front load on a bike not intended for one can cause the handling to become slow and laborious to the point that controlling the bike is difficult.

The design dynamic of combining a front load with low trail to achieve neutral handling was well understood by many framebuilders and cyclists around the middle of the last century, and then got lost in the hubris of the bicycle industry. It never really made it to North America en masse. It has been undergoing a revival in the past 20 years, but few mainstream companies have yet done anything with it, and it has also not yet penetrated conventional cycling dogma. Below is my bike, a Soma Grand Randonneur frameset, about the closest thing there is to a mainstream offering. I can put 12lbs or 5.5kg in the bag and it will still handle like a road bike. 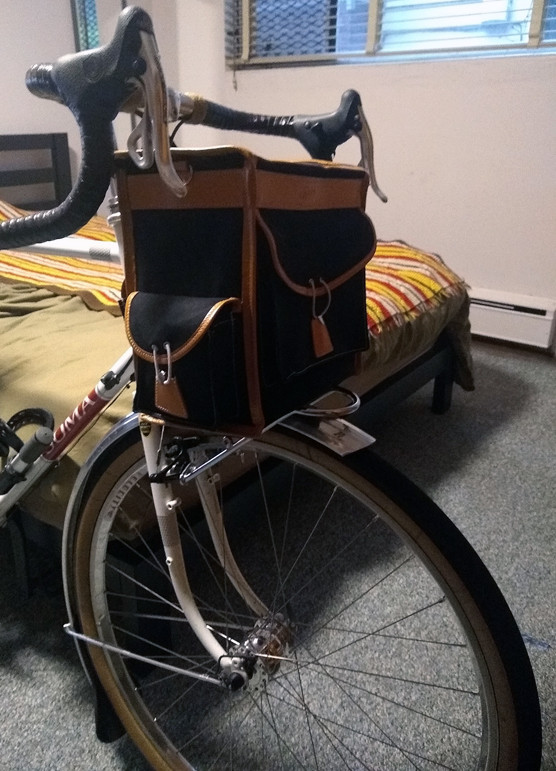 Loads behind the steering axis of a bicycle create a tail wagging the dog effect and require additional steering inputs from the rider to keep the bike balanced. For a design where this kind of load is expected, the head tube angle is usually slackened, creating a high trail number. This doesn't reduce the need for corrective steering inputs, but it does make them more manageable for the rider by slowing down the handling of the bike. The disadvantage is you then have a bike that handles slowly in all circumstances, and one where the rider must contend with increased wheel flop.

Contemporary gravel, allroad, and touring type bikes from mainstream companies virtually all follow the latter design. They have fork offsets in the 45-50mm range and head tube angles of 70-72°. They are mid or high trail. They want to carry most of their load in frame bags, seat bags, and/or panniers. Of these, the lower and more central you can get your center of mass, the better the bike will tend to handle. A smaller handlebar bag can still be used but it's best to keep the load under 5lbs or 2.25kg. Handling impacts will be limited with this kind of front load and it's still enough to carry the frequently used items for a day ride, like phone, keys, map, snacks, arm and leg warmers, light jacket, etc. You can use a shoulder strap for off the bike. You may be able to notice it in the bike's handling a little, but it's worth not having to dig for these items in a less convenient bag. The same rule of thumb of about 5lbs max in a handlebar bag is also true for conventional road bikes with a 43-45mm fork offset and 72.5-73.5° head tube.

There's an argument that on a bike with mainstream geometry, bento boxes do most of what handlebar bags do without impacting handling the same way. That's valid but they have pros and cons. A major negative of bento boxes is the lack of a see-through map pocket, a feature seen as indispensable by many.

If by day pack you mean you'd like to be able to get off the bike and have a proper backpack to hike with, that's more the purview of a convertible pannier. Panniers are out of fashion for some fairly valid reasons, the major ones being the base weight penalty of their racks and their suboptimal weight placement, but there are nice things about them too, and backpack convertibility is one of them.

Not the answer you're looking for? Browse other questions tagged touring bags or ask your own question.

6
What are velcro alternatives for frame mounted bag?

25
What are important items for a touring first-aid kit?
3
How much food should I carry cycle touring and what factors affect this?
4
Tri-bars/Aerobars on Mountain Bikes
5
What to pack for small 500km touring?
13
Bag for holding valuables on bike while parked?
6
What are velcro alternatives for frame mounted bag?