In attempting to bleed my Shimano 105 hydraulic disc brakes, I seem to have threaded the bleed port so the screw no longer tightens. Screw is fine in the other shifter, and same issue when using screw from other shifter. I (foolishly) used a metal aftermarket bleed cup adapter and I think over-tightening has caused the issue! Any ideas how to remedy, without needing to buy a new shifter? In attached pic, screw is #4 and offending adapter is #12. 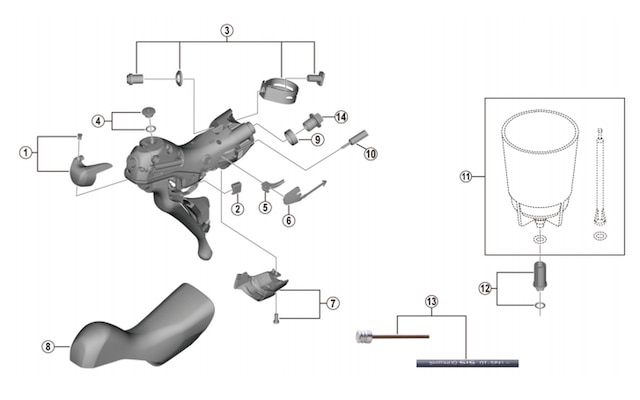 Furlough means I don't have one in front of me, but if memory serves the piece with the threads is separate from the main body of the lever, even though Shimano doesn't make it available individually. I believe it's like a reservoir cap and there's a hidden gasket or rubber diaphragm in between it and the lever body, and it's held on by some screws. If that's all true then I think your best shot at a fix is finding another of the same lever that died from other causes and cannibalizing the part. The upshot here is that the 7000 series 105 levers have actually had some QC type issues with the shifter getting jammed early in its life. I'm not saying it's a common issue per se but I've seen 3 of them I handled myself and can remember since these have been out, both the mechanical ST-R7000 and your ST-R7020. Shimano sends warranty units and has shops send the dead ones back. I think there's a fair bit of this going around so there may be some chance for you to find one to swap with. Some might be going in the trash too.

I'm a little torn on whether helicoiling seems like a good idea here because of the risk of it not being able to contain the oil pressure. That o-ring is there for a reason. There are other applications where helical inserts contain all sorts of pressure, like engines, but the bolts are bigger and can be torqued higher there and will presumably form a much tighter seal. So I don't think it's probably a great idea but if you're willing to take on some risk it might work.

Not the answer you're looking for? Browse other questions tagged brakes shimano shifter or ask your own question.