I was about to order a new square tapered BB for some folding bike.

Normally I would opt for Shimano UN55, since they tend to last a long time. However I noticed that some new variants were offered: UN300 and UN100.

Since I could not find any detailed info on Shimano's page (nor got a response from the webshop), I ask here.

After a bit of digging I bring my preliminary conclusion (partly based upon comments), although nothing is confirmed:

My guess it that UN300 is a minor upgrade from UN26, by having alu shells and some convenient improvement with spacers (to me it seems unrealistic that new product in this category is 30% cheaper and more durable). I kind of doubt Shimano will introduce a new "high end" square BB on par with UN55.

I think I will buy one of each, and perhaps bring an initial impressions update. 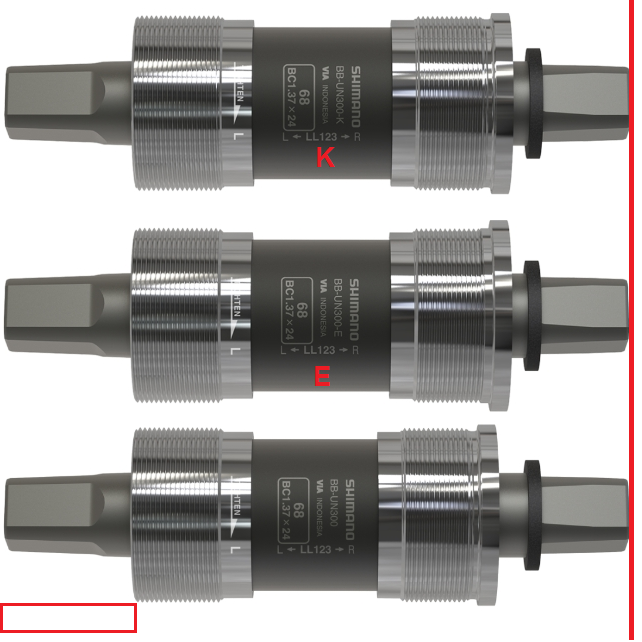 Update after receiving UN300s and UN100

TL;DR: UN300 looks to be a well-made unit with good seals, but maybe not as tough as UN55. UN100 looks identical, except for plastic shells.

Let's get the weight out of the way:

The shells look like they are fitted/glued on. On the old UN55 the main unit with drive-side looked as if it was machined from a single piece of steel. The new UN300/100 is 1x steel axle, 2x shells (alu/plastic), 2x cartridge bearings and one middle piece (steel), although the drive-side shell is not immediately removeable.

The UN300 has the same white powder coating like UN55, and I guess this is similar to blue loctite you find on many bolts. The UN100 does not have this, but for plastic you do not have to care about corrosion anyway.

The finish of UN300 looks great, and has laser etched name + tighten direction.

The shells have seals that attach to the axle and it looks like an effective way of keeping water and dirt out.

On the german Shimano site the UN300 is a bottom bracket designed for (e-)MTB. It is advertised as available in 3 versions: standard, E-type and closed gearbox (I think it is the spindle&co. without the housing). Different lenghts are offered. It is advertised as part of the "Shimano Acera" family of products.

The UN100 is advertised as part of the "Shimano Altus" and "Shimano Tourney" family of products. It explicitly mentions being compliant with two specifications only (D-NL and LL123)