What type of brake is this? Adjustment questions 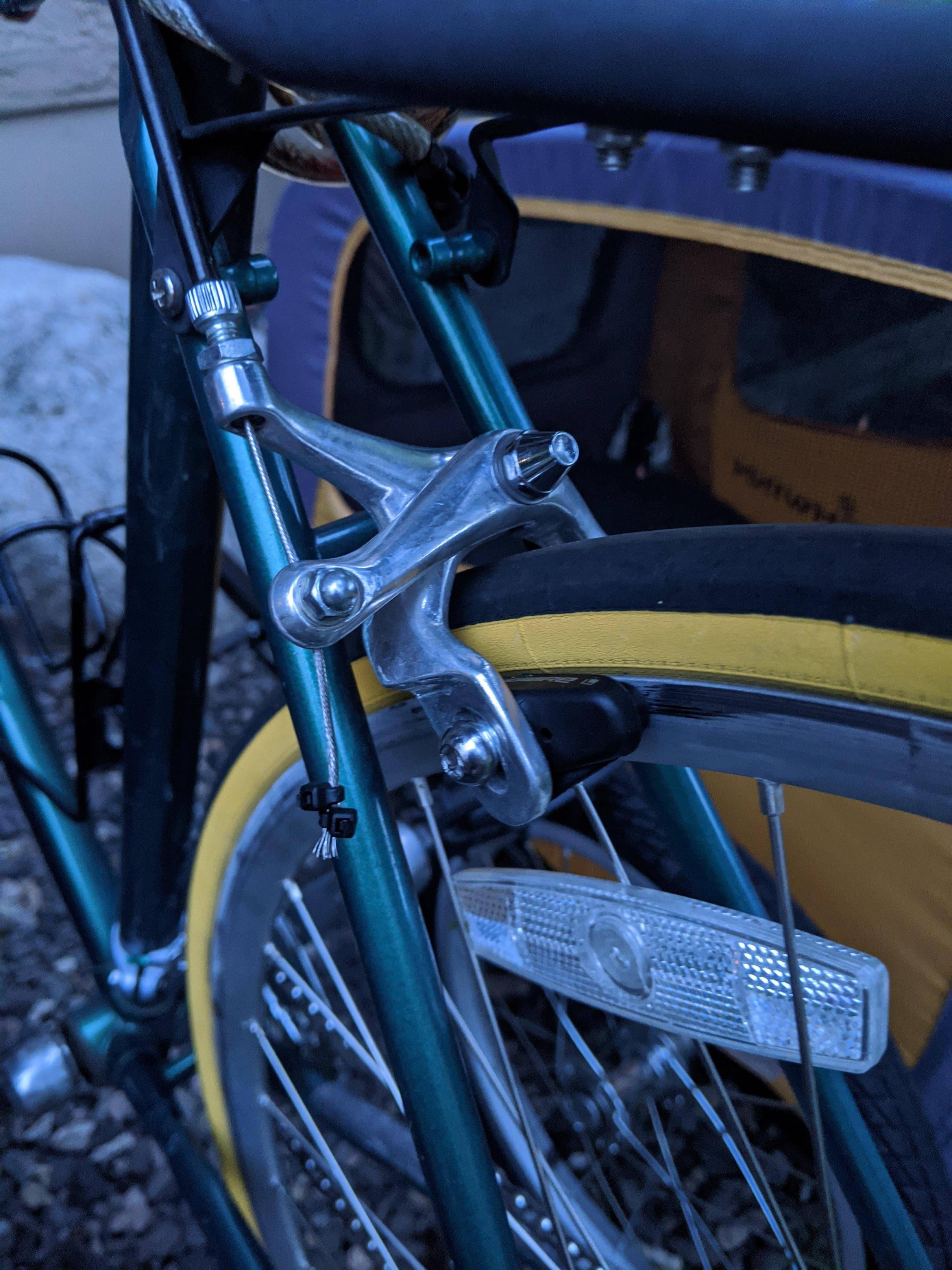 I was also having problems where the rear brake would would squeeze and clinch the rim, but then would not release. One possible problem I saw was the housing line near the rack: 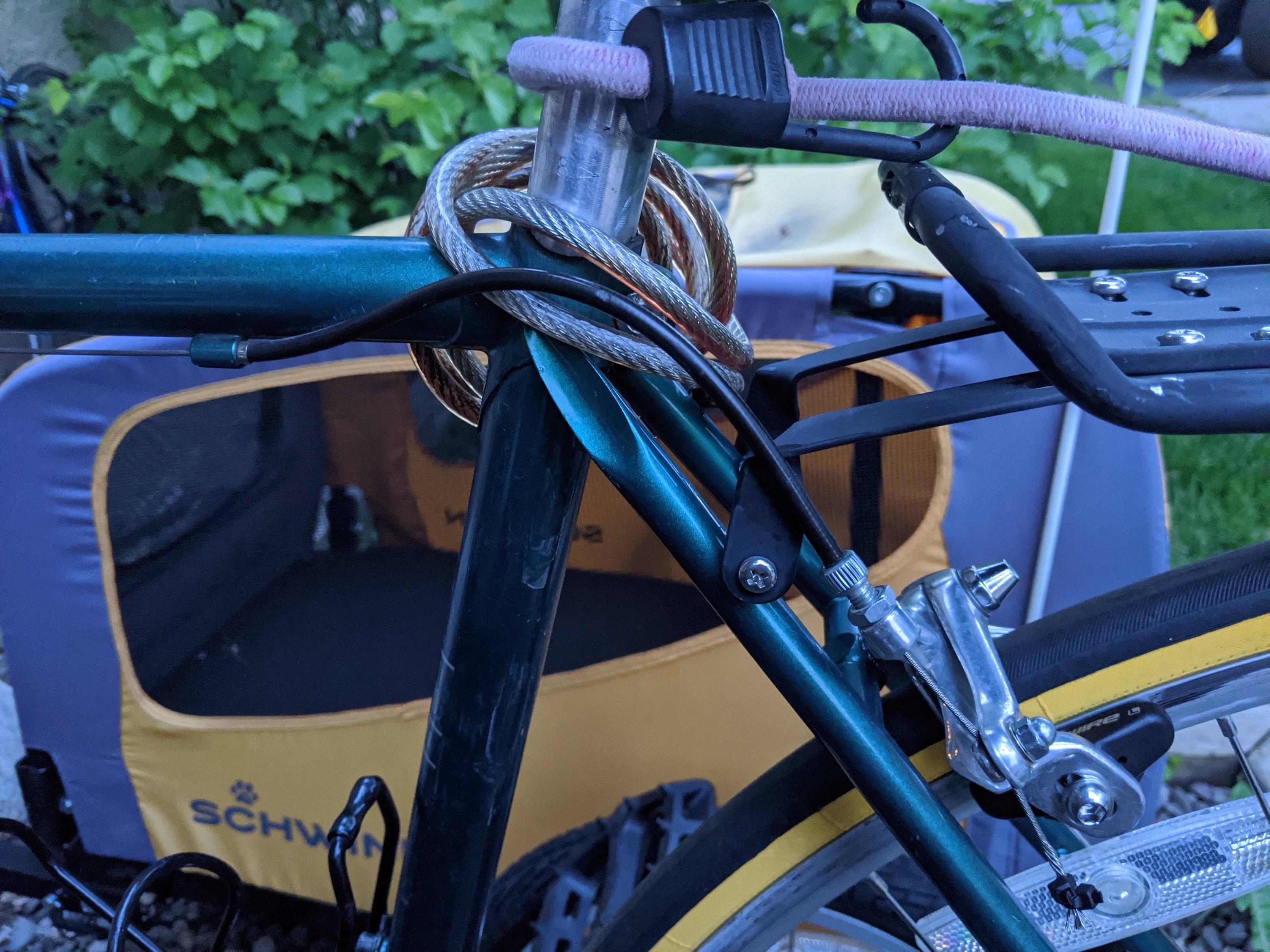 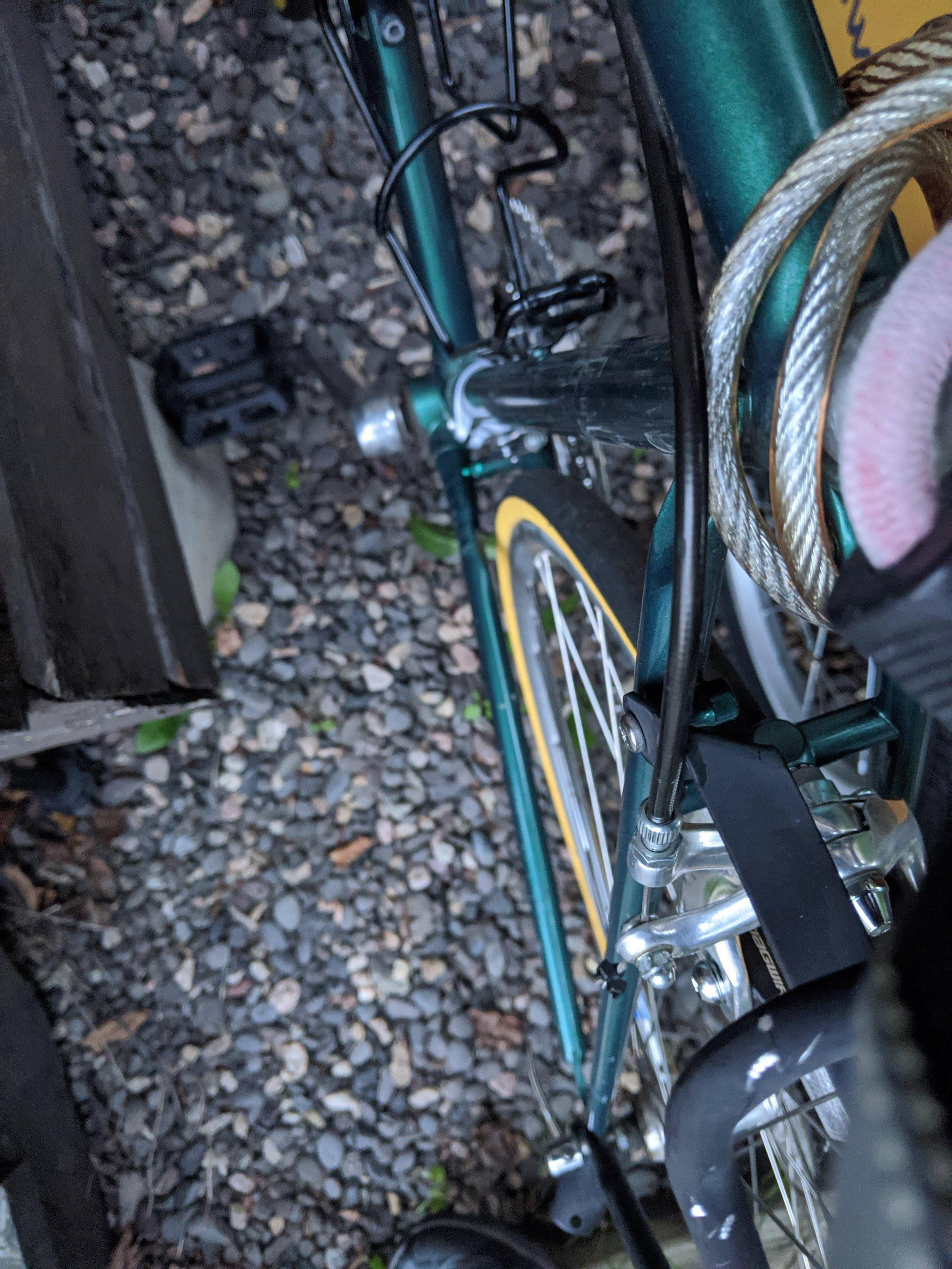 As is, the rack is directly in the ideal housing line. Can the rack be moved to the "inner" holes? Or should the housing just be shortened to reduce housing motion near the rack during braking? 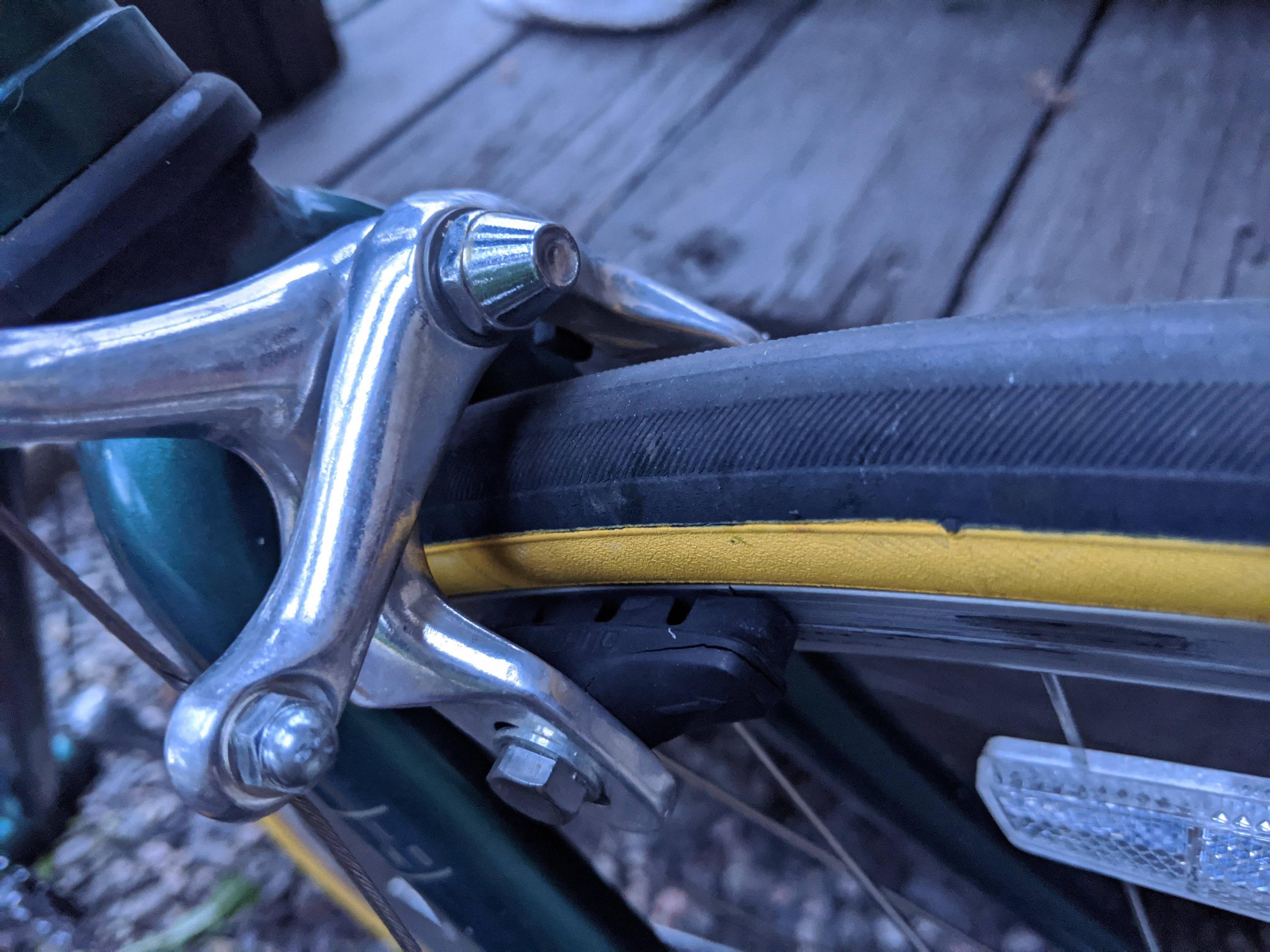 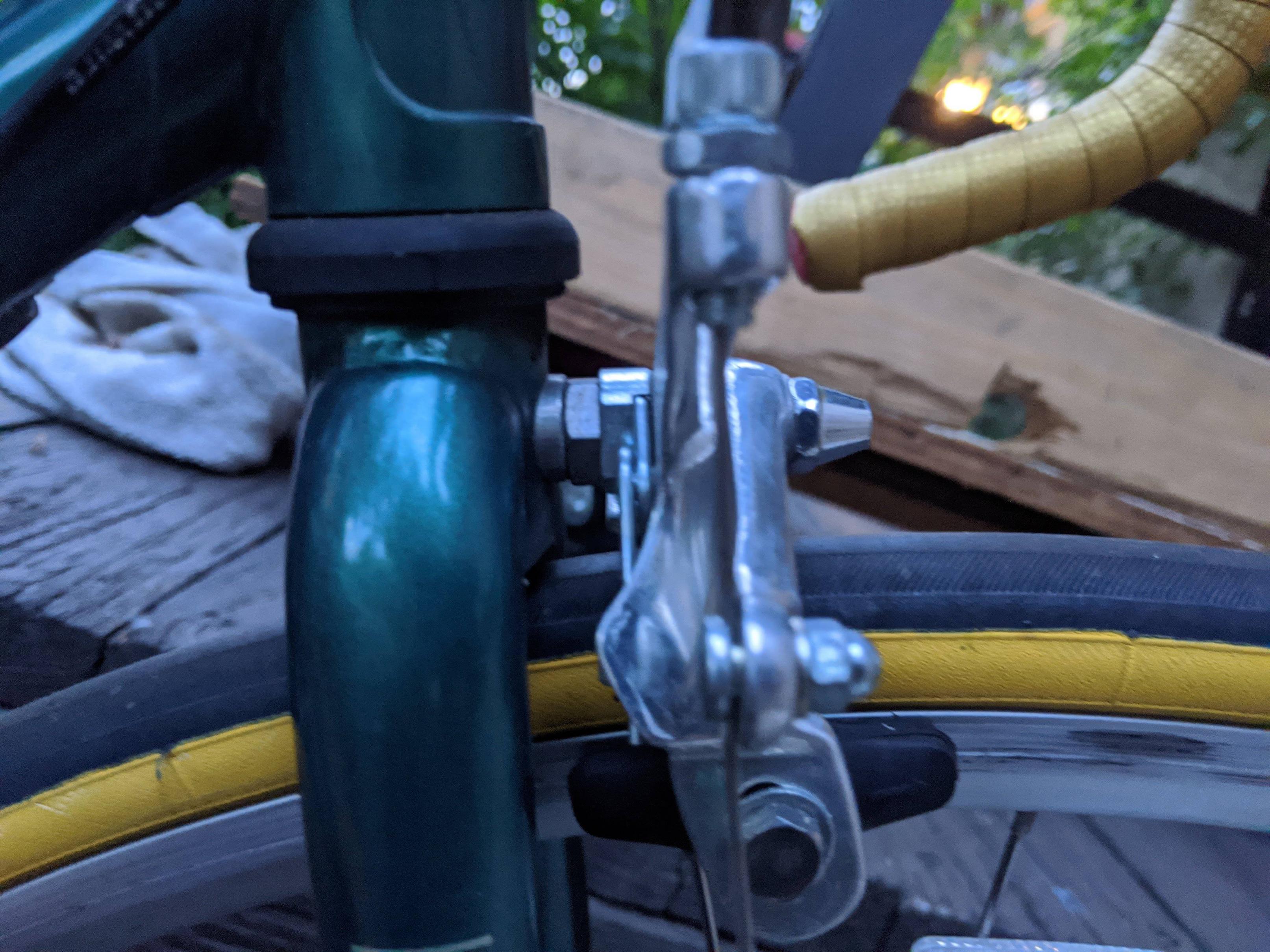 I plan to replace cables and pads! Any thoughts on adjustment techniques, or where I can learn more?

This is one of the generations of Shimano single pivot sidepull brakes where the layout of what fasteners do what is different from the more common type that has two nuts like you mention. The pivot adjustment procedures do not translate at all.

For this brake, the wrench flats you see on top of the brake arms are integral to the pivot bolt. Or in other words, the brake is comprised of one long bolt, and that's the head of it. Then behind the arms are the spring carrier and the locknut, which are both threaded, and function similar to but in a different place as the two nut style of brake you watched the video for.

Not knowing what you're dealing with makes things go haywire quickly on these. More common sidepulls have the spring carrier as the rigid piece that's integral to the pivot axle, whereas on this it's threaded and turns independent of it for adjustment.

Taking the brake off the bike completely and unfastening the cable will tend to simplify the adjustment process with these brakes, especially when you're still just figuring them out.

The nature of these brakes is that it's easy for someone who doesn't know what they're looking at to leave them in a state where the locknut has been broken free and the spring carrier is just floating on the pivot bolt causing all sorts of problems with binding and not centering correctly. If you just put a wrench on the spring carrier and turn like you would on other types, that's likely to happen.

Another description of the procedure can be found under the "Safety Pivot" section here.

Note that all of the above is only relevant to adjusting play or binding in the brake arms or to make sure everything is fastened properly.

The cable routing by the rack could be problematic if the housing is bonking against the rack as the brake is trying to spring back. If it's close but just missing it or only barely contacting, that's fine. Manipulating the strut or using a different one to avoid interference is what you'd do if there was a problem. You could likely fix it by loosening the bolts that secure the strut to the rack, reefing the strut in a bit with pliers, and re-fastening the bolts.

Housing friction can also cause the poor return action. There are many questions here about how to diagnose and fix that.

Not the answer you're looking for? Browse other questions tagged brakes rack or ask your own question.

1
Brake cable housing doesn't attach to lever
1
When to tune/replace brake cables for optimum tension
2
loose brake calipers
1
My brakes rotate around after I tighten them and other v-brake questions
9
Shimano RS785 hydraulic disc brake caliper will not reset
3
Left Brake Lever Slack
2
How to create tension in old upright handle bar levers / U brakes?
2
Should brake lever move if you press the (V-brake) calipers together?
14
Can't get enough braking power after lots of adjustment