Can I reorient my dérailleur so the top jockey doesn't hit the cassette?

I was running a RD-M7000 dérailleur on my Scott E-Genius 730 and I recently received some good advice here that the Deore RD-M6000 is a drop-in replacement. I have now purchased and fitted that, but the topmost jockey wheel appears to be touching, or at least far too close, to the cassette. As a result I get a lot of unacceptable gear clatter in most rear gear selections (I also can't reach the highest gear, but one step at a time).

Here is an overview of the cassette, dérailleur, chain and crank. 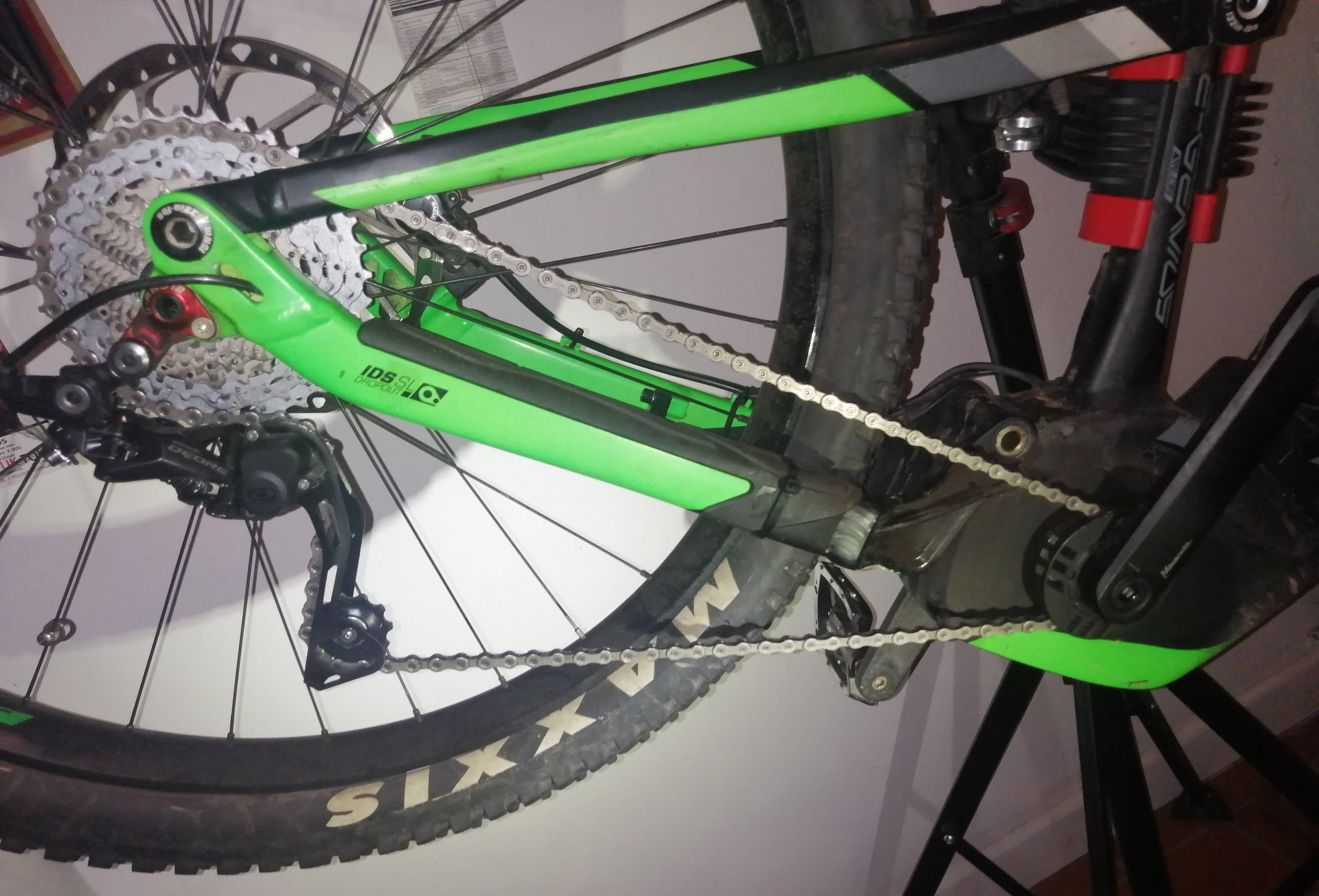 I believe I've taken some six links out of the standard chain, and I think it is probably still too long. However, I don't think this is the problem. If I pull down on the main lower section of chain (to emulate a shorter chain), it pulls the lower jockey wheel closer to the crank, but it does not at all move the upper jockey wheel away from the cassette. I think that is what I need to fix.

Here is a closer view: 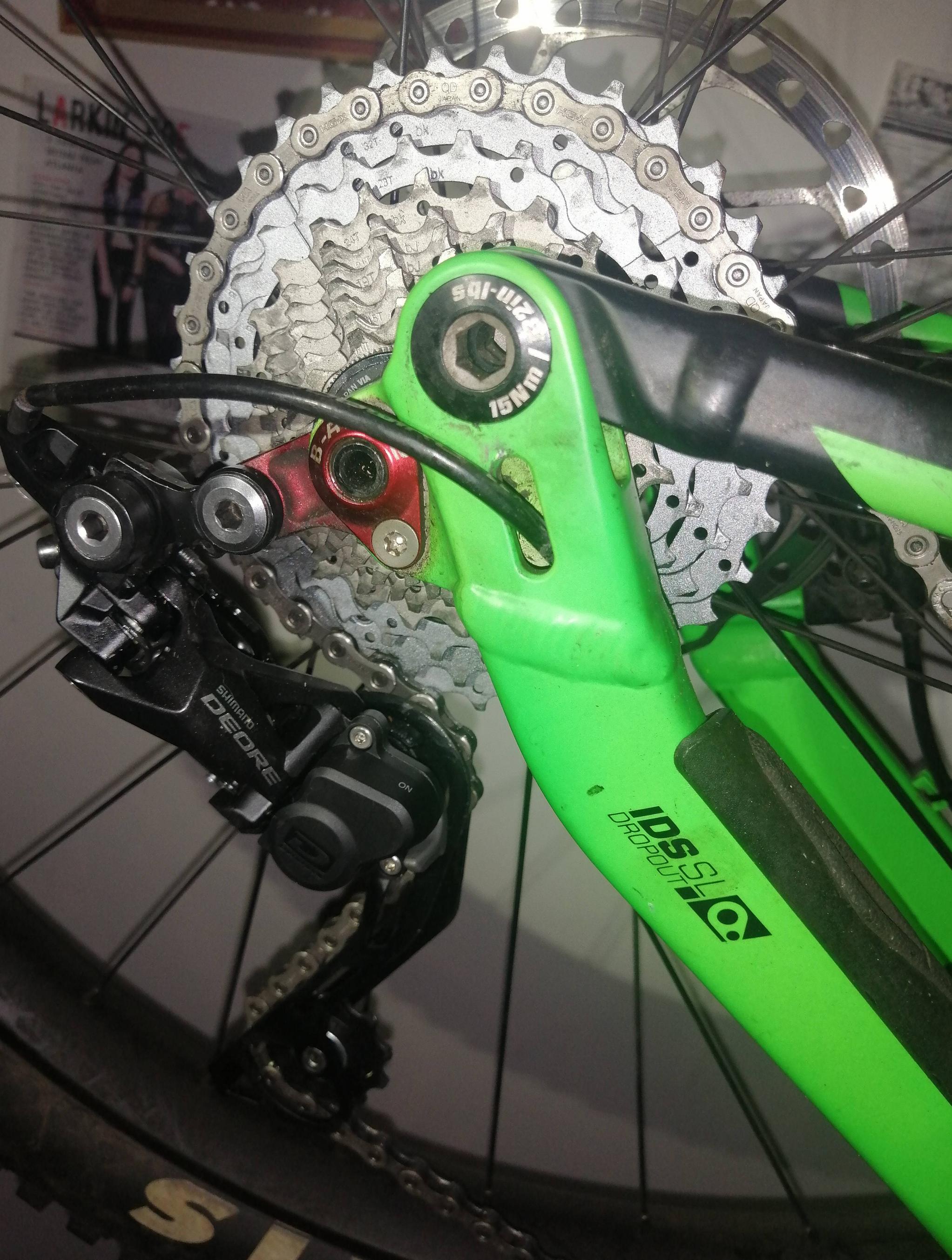 You can see here that the upper jockey is far too close to the cassette.

Finally here is what I want to achieve - something to reorient the dérailleur angle so the upper jockey is distanced from the cassette: 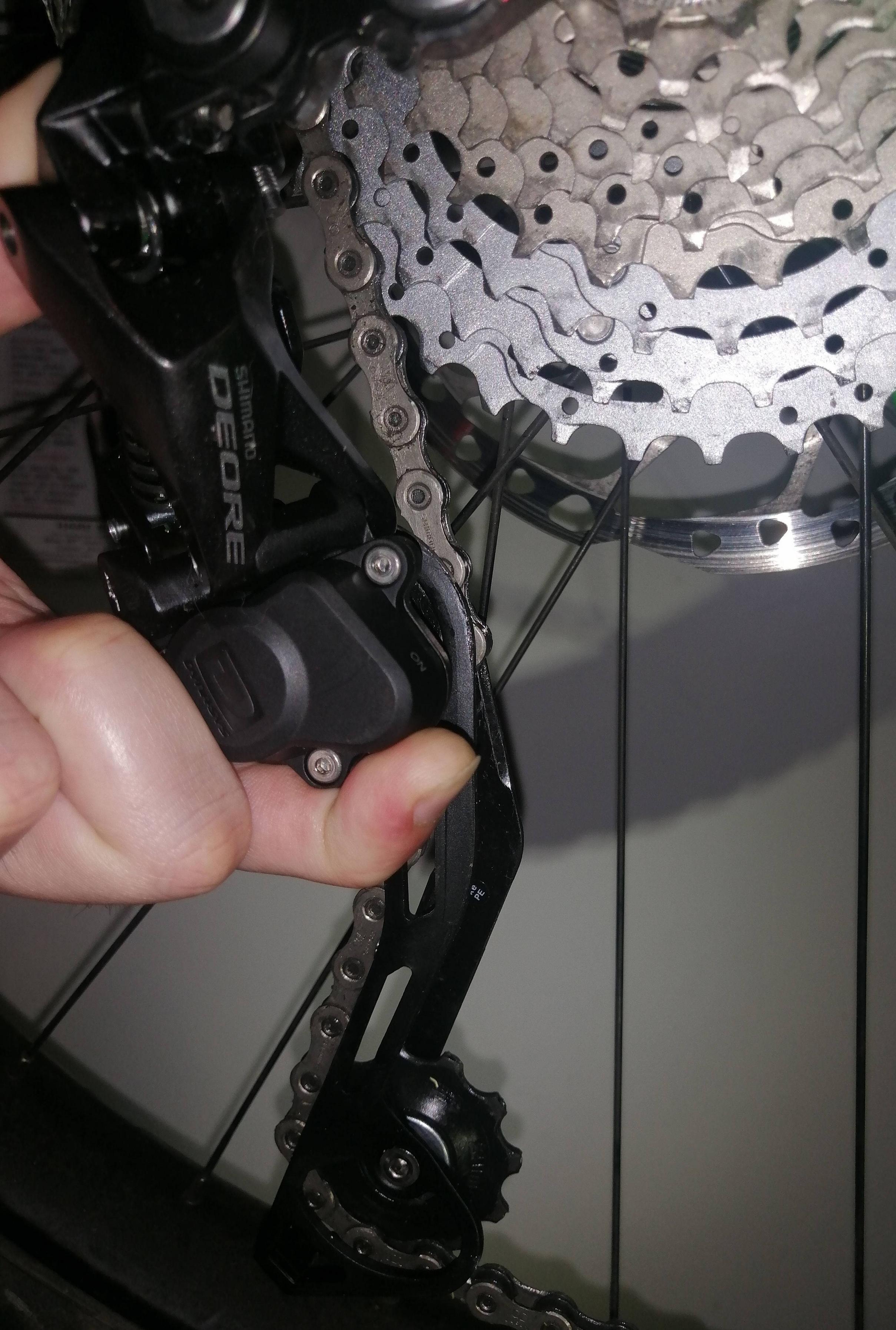 I have a suspicion I know what is wrong, though I don't know how to fix it. In the first two pictures a red connecting mount on the bike is shown. There is a black connector piece attached to that, and finally the dérailleur is attached to that. What I notice is that the two connector brackets form an angle of some 15° from each other. However in my previous post (see first link) they are some 85° from each other, and note: it is the old bracket. Not a new matching model - the actual old one from the old photo.

However I have slackened the internal hex key nut off, and tried to move the dérailleur clockwise around this pivot point, but something is preventing this bracket from travelling further. I wonder, could I have installed it back to front?

On these Shadow derailleurs, there is a tab that must rest on the bottom lip of the derailleur hangar. (I'll note at this point that you must use the correct hangar for your bike. "Almost" like it or "derailleur has the same angle" when an incorrect hangar is used doesn't cut it. Millimeter differences create big changes in the workings of these things. Consider how a few rotations of a fine threaded Barrell adjuster can change a whole gear. Or if the cable is not routed just right--like say misses a small little leverage tab, the derailleur won't be able to get onto certain gears.). If the little tab isn't touching the lip of the hangar, shifting will be compromised. In addition, I see your derailleur's cable is not properly seated into the derailleur's housing. That will eventually cause excess friction and poor shifting. While one doesnt necessarily need ferrule at this point on the external (the derailleurs cable seat/stop can act as one)—a sealed ferrule will prevent easy contamination of the inner cable at this vulnerable spot. Full Suspension bikes utilize the aluminum ferrule to help prevent ghost shifting when the suspension moves. 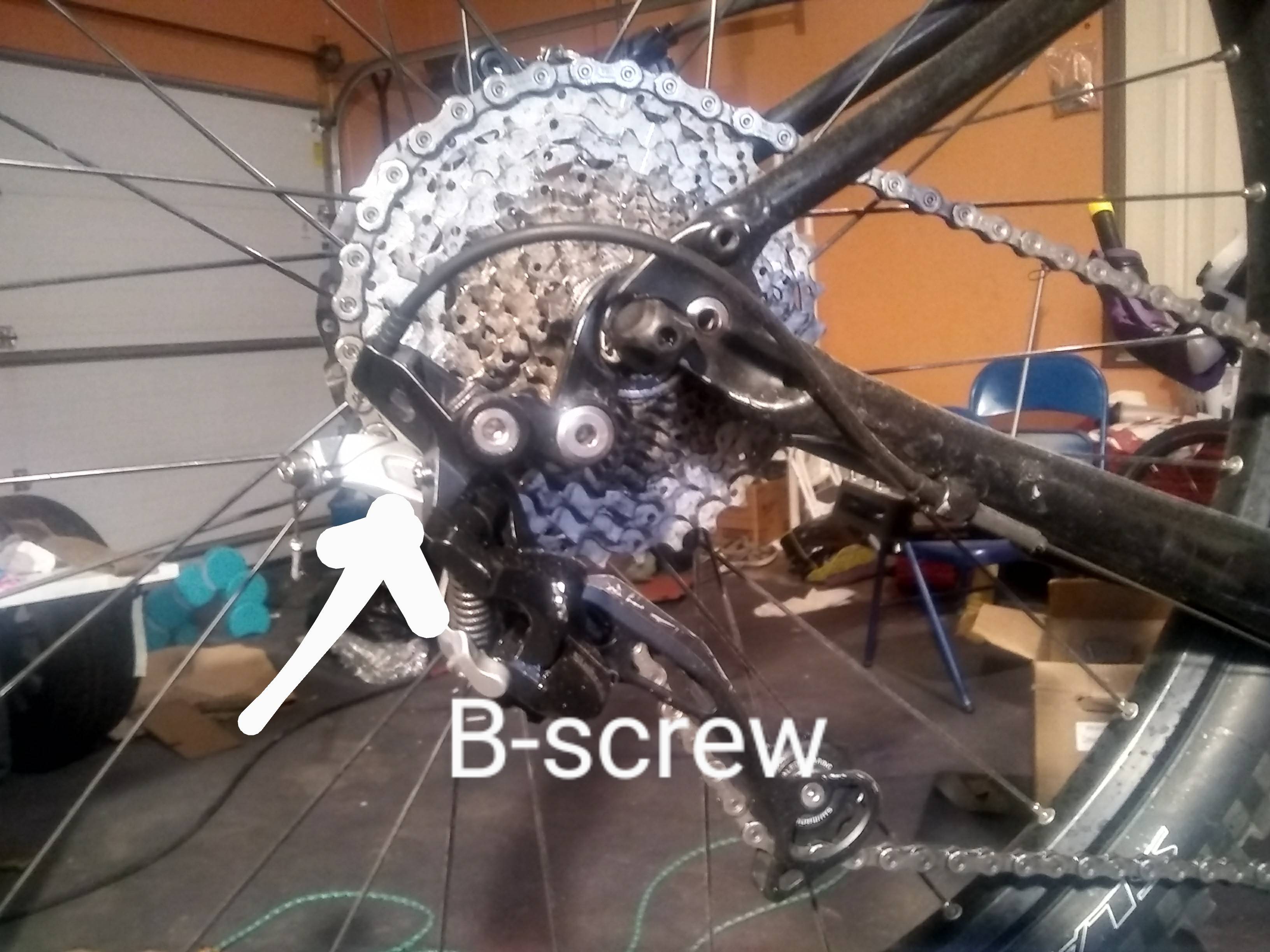 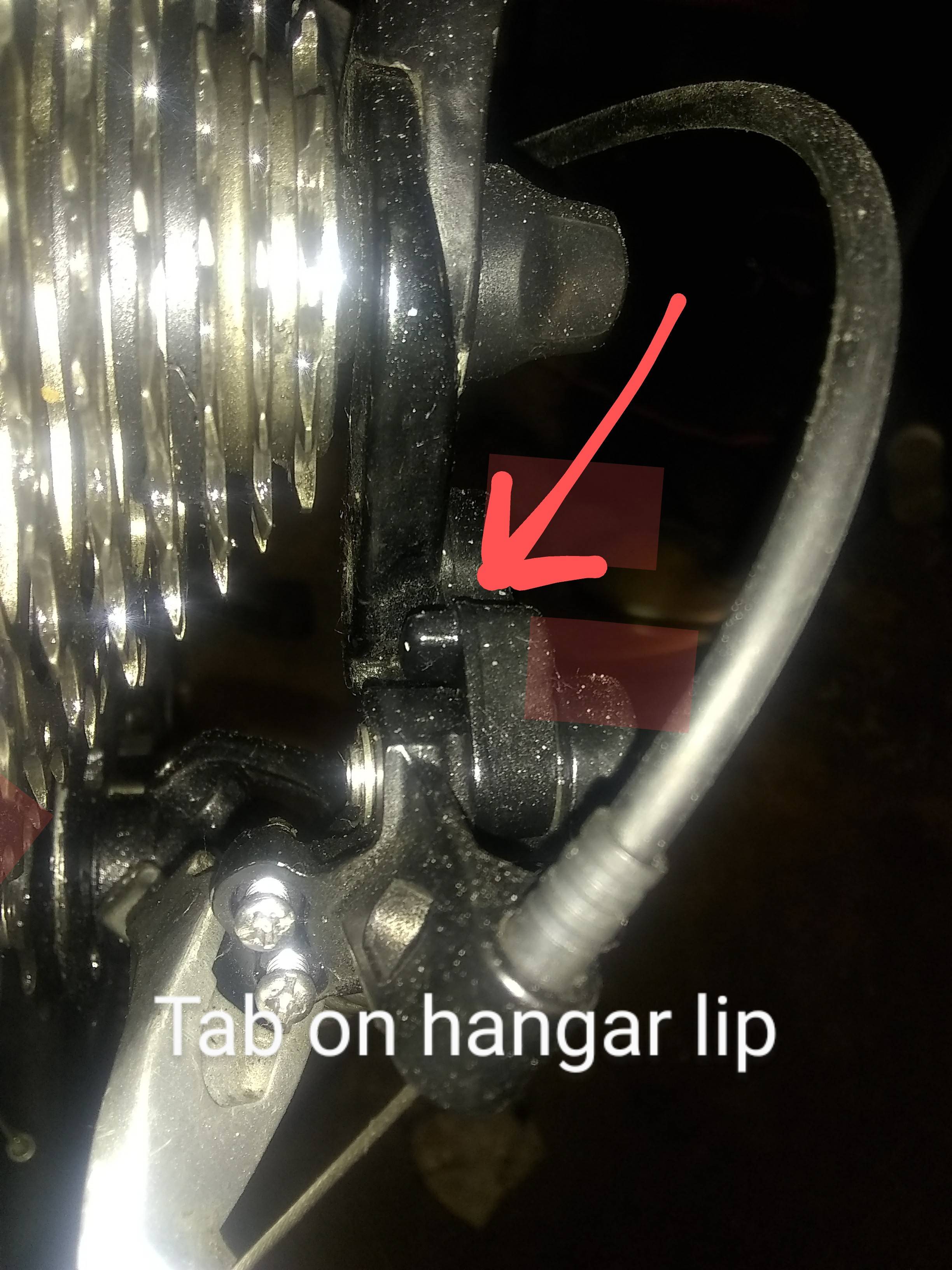 Note the things I'm talking about on these pics of my XT Shadow der. My cassette is an 11-36. Up front I have a 2x crankset, 38-28, and I'm on the big ring. You have to hold the derailleur just so on install so that tab gets seated in the proper spot. In this Dealer's Manual from Shimano these issues are discussed. 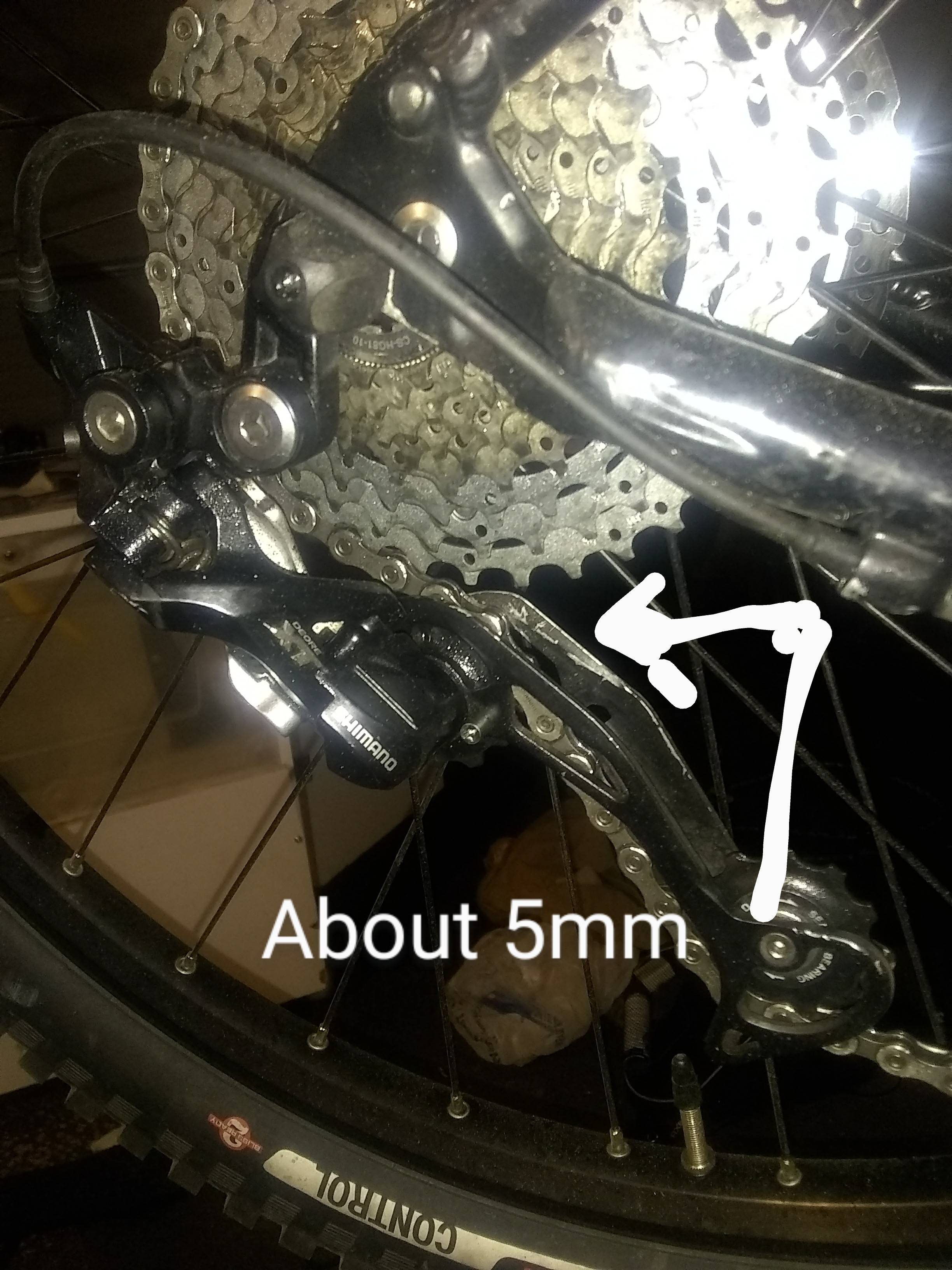 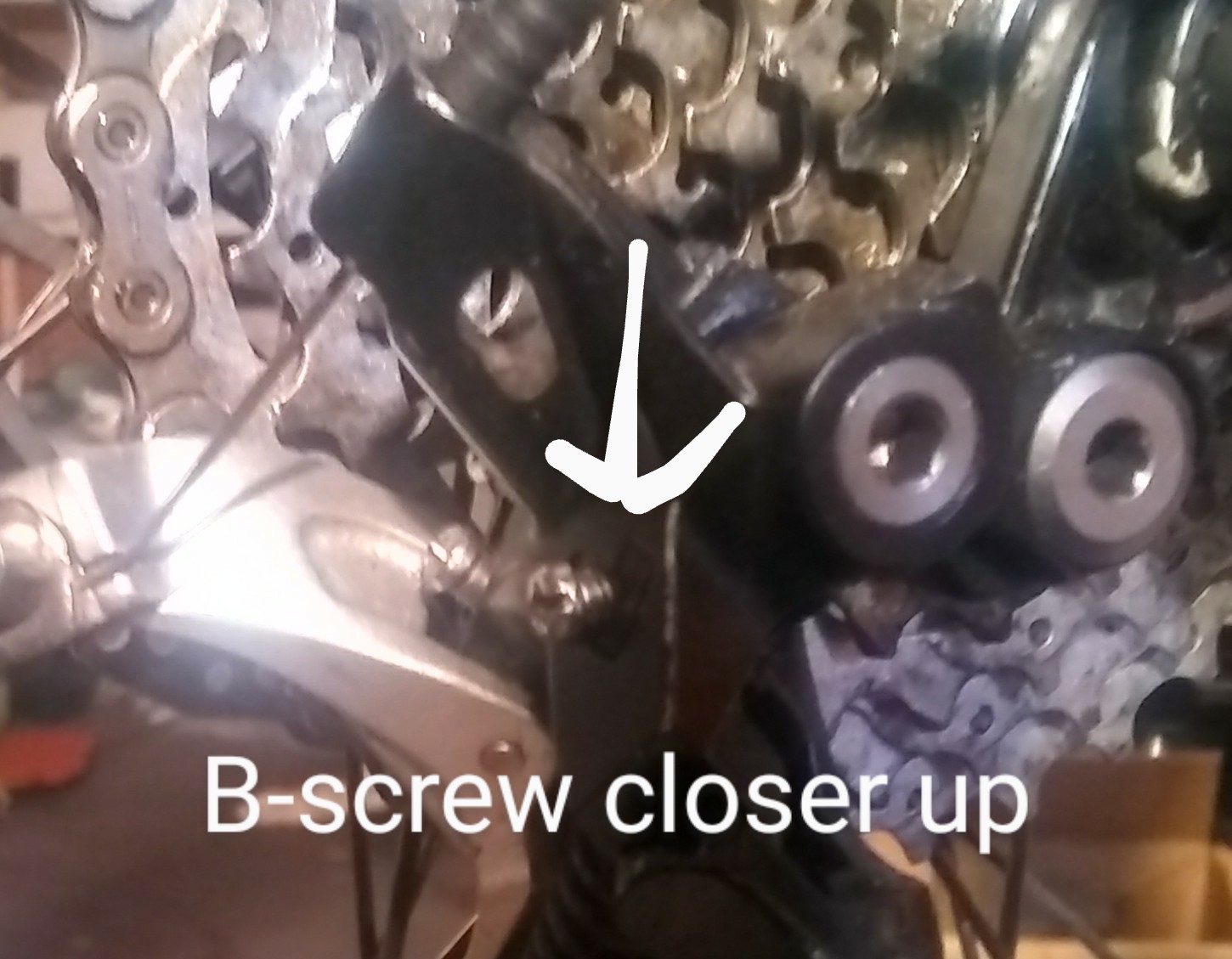 Not the answer you're looking for? Browse other questions tagged mountain-bike gears derailleur derailleur-rear derailleur-hanger or ask your own question.

3
Is my Shimano Deore SLX dérailleur a medium or long cage?