I recently bought a road bike and also SPD-SL shoes/pedals, but have not been able to find a cleat position that feels natural to me. After long rides the hamstring tendon that attached at the outside of the knee starts to hurt and I feel like it's due to my feet being too far outward away from the center of the bike. I think my hips are on the narrower side and thus my stance also is.

My cleats are already positioned maximally to the outside of the shoe. What I don't understand is that the cleats can only be adjusted sideways about 5 mm. How can such a small range be sufficient for people with legs/hips of all sizes?

My question is: what is the easiest way to get my shoes closer to the center of the bike.

Photo of my bike and shoes: I would like to move the shoe such that is almost touches the crank. This feels most natural to me. 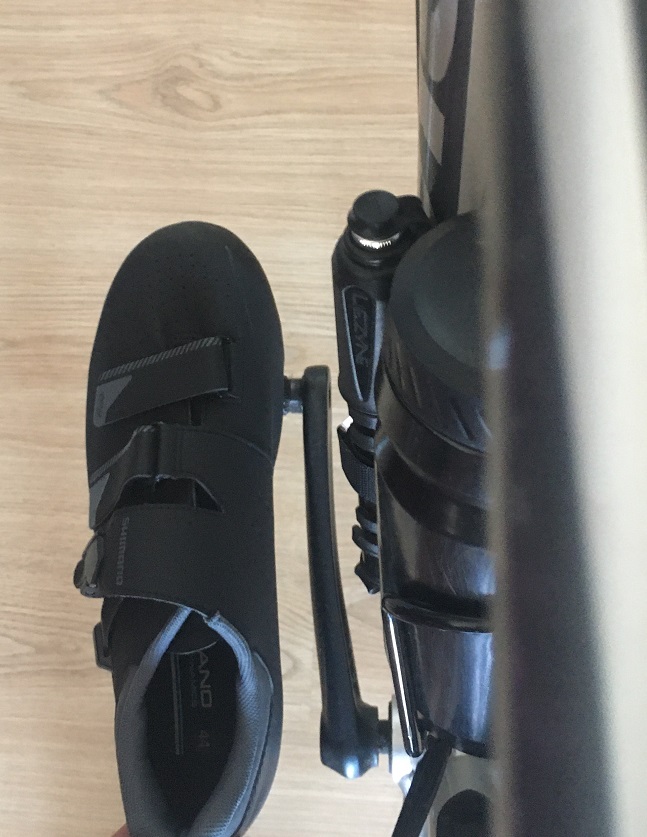 First, I should mention that when pedaling, we generally want the cleats' lateral position to be such that our knees are in line with the center of the pedal. This is a common principle in bike fit, as illustrated by the picture below courtesy of Rick Schultz, posted on the Bikefit blog. 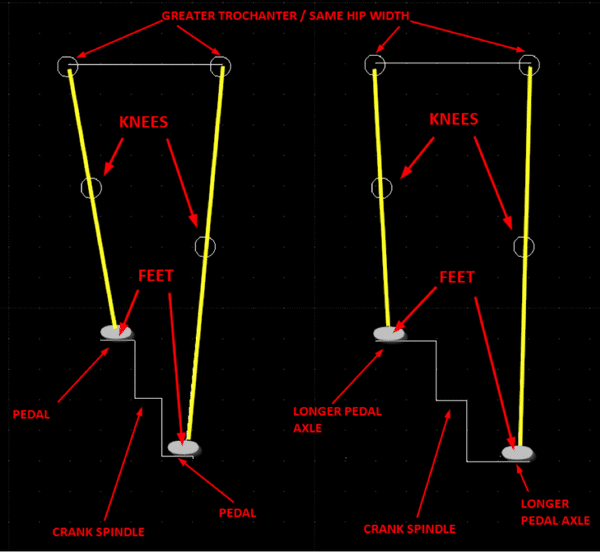 You correctly deduce that having the wrong stance width may cause knee or other problems (but remember that knee pain is complex, and new cyclists may sometimes not have the correct intuitions about why their position is wrong - actually, the same is true for experienced cyclists as well). The blog post outlines a number of solutions, but most of them are aimed at widening your stance, not narrowing it. Anyway, changing the lateral position of your cleats is probably the first step, and you already chose the correct path of moving them outward on the shoe (which moves your stance narrower, not wider; note that I corrected some wrong language from my earlier response where I got confused). At this point, it is likely you would benefit from seeing a bike fitter.

That said, I am a 5' 5" tall male cyclist. The range of lateral adjustment available on both Speedplay and Shimano SPD-SL pedals has been sufficient for me. I don't think that many people will need narrower cleat positions than are available commercially (because most people below my height are women, whose average hip width is wider than men). If do you actually need your cleat position to be narrower, you may be an edge case not well-handled by the available equipment, and you would definitely benefit from a professional fit. If you can get your knees in line with the spindle on your current setup, then I'd urge you not to go narrower than that. If you can't, then a fitter is likely to know about available options.

Just to put one option out there, Speedplay pedals can accommodate narrower stance widths than most others. The link goes to an article on Slowtwitch (a tri website) written by Dan Empfield, and he articulates a number of other advantages of Speedplays.

Pertinent to the cleat stance issue: Standard model Speeplays ship with 53mm spindles, which I believe is about the same as the default spindles on Shimano pedals. However, Speedplay cleats appear to have a total range of 8.9mm of lateral adjustability (I measured this with calipers, measuring from the center of the mounting screws in both the extreme positions; note that Empfield characterizes the range as about two spindle sizes, which is 6mm; more discussion below). I believe SPD-SL cleats have a total of 5mm of lateral adjustability, plus the yellow ones allow 1.5mm of lateral float.

Last, Speedplay pedals may be available with custom 50mm steel spindles, i.e. 3mm shorter than stock. I say this because Wahoo recently bought the company, and I'm not sure if the company will continue to make these spindles available. While the titanium spindled versions are very expensive, they come in a stock 50mm length. Either the custom steel or stock ti spindles may be an option if you truly must have those last 3mm of adjustment. Also, I know that some China- or Taiwan-based eBay sellers may offer aftermarket titanium spindles in the lengths you would require. At the time of writing, I have heard good feedback about J&L, which is based in mainland China. I believe they've been selling spindles for some years. NB: their continued existence is not guaranteed, and there are likely to be at least a couple other aftermarket players.

Note that Speedplays require significantly more maintenance to both the cleats and pedals than Shimano pedals. I've written about this here. You will really want to take that seriously, otherwise you will chew up their cleats, and those are expensive.

Revisiting your question if the standard cleat position is really suitable for most human cyclists: it may well be, and moreover, many cyclists are not that sensitive to their cleat position. Consider that many cyclists switch between road and mountain bikes without major issue, and MTBs have much wider pedal stances. Many pedal manufacturers do make longer spindles available, and Speedplay have +3, +6, and +9mm ones. Apart from Speedplay, I only know of one pedal with a shorter than stock spindle (Shimano's XTR pedals have a -3mm spindle). As I said earlier, there are very few men my height and shorter, so I don't think there is a large market for narrower spindles. Additionally, if you have your feet that close to the spindle, your shoes may rub your cranks.

Last, I reiterate the need for a bike fit if you are having muscle or joint pain. While they are expensive, it is well worth it for serious cyclists. You may think the issue is your cleat position, but you and I are not trained in bike fit and physiology, and we could easily be wrong.

For many of us, our feet probably don't point straight ahead naturally. Most likely, the OP's bike store set their cleats up pointing straight ahead. Shimano's yellow cleats have 6 degrees of angular float, which is likely to allow most riders to find their natural foot position. (NB: this is 3 degrees left and 3 degrees right of the pedal centerline, not 6 degrees left and right.)

If the OP's cleats need further rotation, or if they got the blue or red cleats which have 1 and 0 degrees of float, rotating the cleats consumes some of the available room for lateral adjustment. Stock Speedplay Zero cleats allow up to 15 degrees of float, which should mean that essentially nobody would need to rotate a Speedplay cleat. (NB: you can't actually rotate Speedplay cleats.)

The OP is almost sure to have yellow SPD-SL cleats. Blue SPD-SL cleats only come stock with Dura Ace pedals, their top of the line pedal. Red cleats must be purchased separately. Many commentators think the red cleats are a bad idea, especially for amateurs. Even many professional cyclists appear not to run the red cleats, or Look's equivalent zero float cleat. Zero float may help very competitive cyclists who are putting out a lot of power and want to waste zero motion, but it's not clear if this is just a placebo effect.

See https://forums.roadbikereview.com/general-cycling-discussion/outer-knee-pain-257131.html Since you are experiencing pain on the outside of the knee, your situation may be the reverse of that shown in the diagram as the tendon will be pulling to prevent your leg from bending further outwards. Advice from a podiatrist may be useful. Stretching to increase mobility may well help with your problem. Have you had an injury to your hip or leg on the side that is painful?

Here is an easy way to do this: switch to flats. Put your feet wherever you want and you can shift to endless variations during your ride to avoid overuse injury. You also reduce the chance of injury from a fall while constantly reinforcing proper pedalling technique. Why do people clip to their pedals anyway?

Not the answer you're looking for? Browse other questions tagged cleat or ask your own question.

8
Are there big differences in maintenance/care between different types of clipless pedals?

7
How to fix/prevent blocked cleat bolts
4
I'm a bit confused on bike shoe terminology. Particularly regarding Look KEO Plus Pedals - what is required to use them?
7
Clipless pedals: Why clipping in so darn difficult?
1
Foot Tingling with Clipless Pedals
1
SPD pedal float becomes restricted
3
Which cleats provide more adjustment freedom?
4
Can I use mountain biking cleats on a road shoe…?